xxxxxDespite their failure to take Malta in 1565, the Ottoman Turks invaded Cyprus in 1570. In order to break Muslim sea power in the Mediterranean, a combined fleet of galleys from Spain, Venice, Genoa and the Papal States, commanded by Don John of Austria, met up with the Ottoman naval force off the port of Lepanto, Greece, in 1571, and won a resounding victory. Whilst the Turks soon recovered, this victory was proof at last that they were not invincible, and this had an immense impact upon European morale. In addition, despite further territorial expansion, the administration of this vast and diverse Ottoman Empire had begun to fall apart at the seams following the death of Suleyman I in 1566. As we shall see (1604 and 1623 J1), the progress of decay was to continue, albeit slowly, in the next century.

xxxxxAs we have seen, the Ottoman Turks suffered a serious setback when they attempted to take Malta in 1565. They laid siege to the island in May, but met with stout resistance from the Knights of St. John. Dissension arose amongst their leaders as to the tactics to be adopted, and in September, when a Spanish fleet arrived to reinforce the garrison, they abandoned the siege and returned to Istanbul, losing many ships during the debacle. 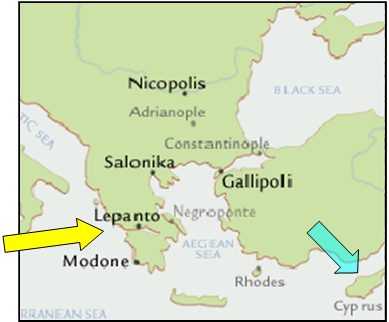 xxxxxUnperturbed, in 1570 the new Sultan, Selim II, aiming to drive the Venetians from the eastern Mediterranean, launched an attack upon the island of Cyprus. In August the following year, after a siege lasting eleven months, they captured the port of Famagusta and, after massacring many of the inhabitants, moved inland and took Nicosia. By then, however, Pope Pius V had formed the Holy League in an attempt to break Muslim sea power in the Mediterranean. A combined fleet of galleys from Spain, Venice, Genoa and the Papal States assembled at Messina, in Sicily, and then, two months later (October 1571), met up with the Ottoman naval force in the Gulf of Corinth off the port of Lepanto (the Italian name for Navpaktos, and then in Turkish hands). 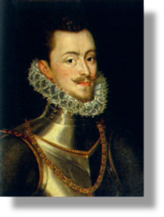 xxxxxThe Christian force, commanded by the Spanish soldier Don John of Austria (1547-1578), numbered 202 galleys, some seventy vessels less than the Turkish fleet. Both sides had divided their ships into three squadrons, and within a matter of hours the Ottoman's centre squadron was defeated by the Spanish, and their right flank was driven into a large bay by the Venetians and totally destroyed. The Genoese contingent then kept the third Turkish squadron out of range until the other Christian forces could regroup and come to its aid. The remainder of the Ottoman fleet was then virtually annihilated. Of their 275 or so galleys only 20 escaped, 30,000 men were killed and 10,000 taken prisoner. By comparison the Christians lost about 8,000 men and freed 12,000 who had been used as galley slaves by the Muslims.

xxxxxThe Spanish general Don John of Austria was an illegitimate son of Emperor Charles V. In the service of the empire he had fought against the Barbary pirates in 1568 and then, over the next two years, had suppressed a revolt of the Moors in Granada. Following his victory at Lepanto he went on to take Tunis from the Turks in 1573, and was appointed Spanish governor of the Low Countries three years later. 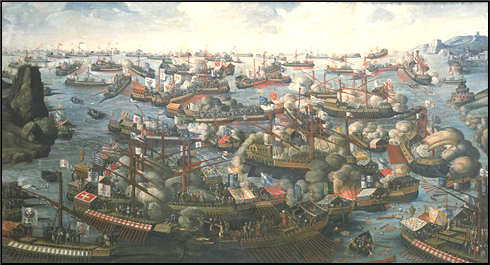 xxxxxThe Battle of Lepanto was the last major naval engagement to be fought almost exclusively by galleys. These vessels, many fitted with three or four cannons in the bows, were propelled by a varying number of oarsmen - anything up to two hundred - and, in addition, carried fifty or more infantrymen to take part in the hand-to-hand fighting. Amongst the Venetian fleet, however, were six huge galleasses, using sails as well as oars, and loaded down with guns. At this stage they were top heavy and difficult to manoeuvre, but they contributed greatly to the victory, and were clearly the way forward, as both Henry VII and Henry VIII had discovered in the building of their "great ships".

xxxxxThe Ottoman Turks, it must be said, quickly recovered from their defeat, and, having built an entirely new navy within the space of a year, were soon back in command of the Mediterranean. Nonetheless their humiliating defeat at Lepanto - and, be it not forgotten, their dismal failure to capture Malta a few years earlier, - was proof at last that the Ottoman Turks were not invincible. The Muslims went on to recapture Tunisia in 1574, force the Venetians to recognise their supremacy at sea and on land, and bring Spain to the peace table in 1580, but for the Christian states of Western Europe they were no longer the object of irrational fear. The Battle of Lepanto was not a decisive naval action, but it had an immense impact on European morale.

xxxxxNor were these outward signs of military prowess on the part of the Muslims a true measure of their Empire's abiding strength from within. For a time territorial expansion continued, but even before the death of their great leader, Suleyman the Magnificent, in 1566, the administration of this vast and diverse territory was beginning to fall apart at the seams. In his latter years, Suleyman left the government in the hands of officials, and many of these were more concerned with their own well-being than with that of the state. When the throne became vacant, the Sultan's three sons entered into a bitter struggle and the weakest, Selim II, emerged the victor. Law and order began to break down, unchecked by an incompetent and corrupt administration, and trade and industry went gradually into decline. Widespread feuding broke out between the ruling classes at the very time when powerful nation-states were emerging in Europe, bent on driving the Ottoman Turks from their continent.

xxxxxThis process of decay was a slow one, but, as we shall see (1604 and 1623 J1), it continued early into the next century, when the Ottoman Turks suffered defeat at the hands of the Austrians and then lost ground to the Iranians under their brilliant leader Abbas I.

xxxxxIncidentally, in 1572 the Spanish poet and man of letters Fernando de Herrera wrote a poem describing the battle in his Account of the War of Cyprus and the Naval Battle of Lepanto. ……

xxxxx...... And the battle scene itself has since been painted by many an artist, including Titian, Tintoretto and Veronese. ……

xxxxx…… The Spanish author Miguel de Cervantes, whose famous book Don Quixote was first published in 1605, was an infantry soldier at the time of Lepanto and served in the Marquesa during the battle. By all accounts he refused to go below, despite suffering from a fever, and joined in the thick of the fighting. He received gunshot wounds to his chest, and his left hand was so badly damaged that he could not use it for the rest of his life. ......

xxxxx…… The English writer G.K. Chesterton wrote a long poem about the battle in 1911, in which he sings the praises of Don John of Austria, mentions Cervantes, and refers to his masterpiece Don Quixote. The last verse reads: 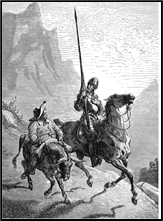 Cervantes on his galley sets the sword back in the sheath,

(Don John of Austria rides homeward with a wreath.)

And he sees across a weary land a straggling road in Spain,

Up which a lean and foolish knight forever rides in vain,

And he smiles, but not as Sultans smile, and settles back the blade …

(But Don John of Austria rides home from the Crusade.) 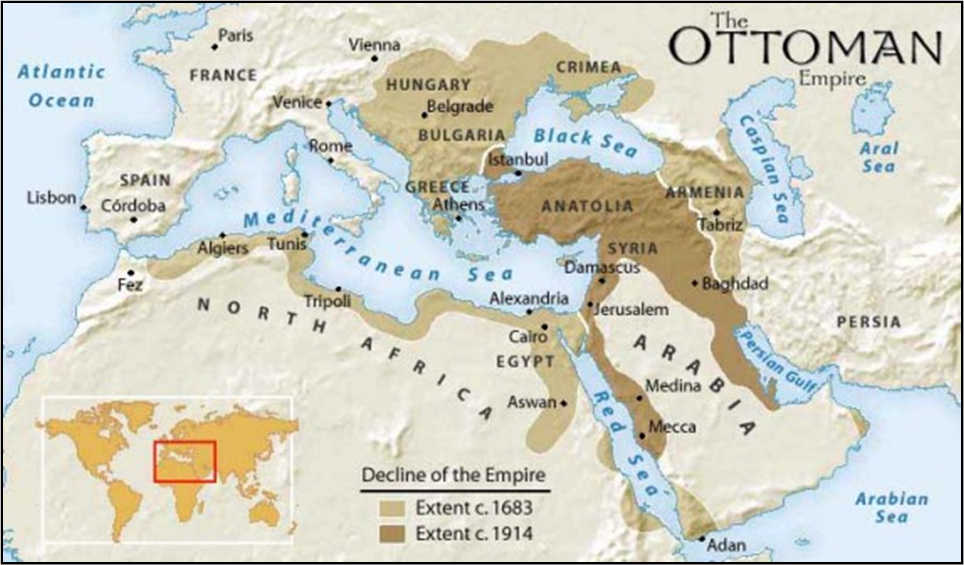