xxxxxThe founder of the Society of Jesus (the Jesuits) was the Swiss soldier Ignatius Loyola. In 1521 he was badly wounded in battle and from then on devoted his life to the Church. It was while studying in Paris in 1534 that he formed a brotherhood of seven, and this society was approved by the pope six years later. Aimed to spread and defend the Catholic faith, the Society was based on military lines and played a major part in the Counter Reformation. By Loyola's death over 1000 Jesuits were working world-wide, and this number increased considerably during the 17th century. Indeed, so powerful did the movement become that it was suppressed in 1773, and, as we shall see, was not revived by Pope Pius VII until 1814 (G3c). It is now noted for its work in education. 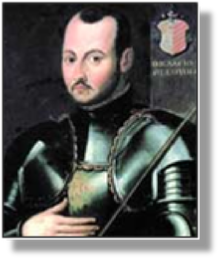 was born of a noble Spanish family. He entered military service at the age of 26, and in 1521 was seriously injured in the legs fighting the French at the siege of Pampeluna. While recovering from his wounds he read about the lives of the saints and decided to devote his life to the work of the Church. After spending almost a year as a hermit, often living in a cave near Manresa, and then begging his way to the Holy Land, he began his education. He attended a school in Barcelona and then studied at the universities of Salamanca and Paris. It was while he was in Paris in 1534 that he formed the small brotherhood of seven which proved the nucleus of the Society of Jesus - one of whom was the future missionary Francis Xavier. Loyola was ordained in 1537 and, following a visit to Rome, the movement received the approval of Pope Paul III in 1540.

xxxxxThe Society, often called the Order of Jesuits, had as its major aims the spreading of the Roman Catholic faith throughout the world and the defence of that faith against the spread of Protestantism. It placed great emphasis, too, on education and this became its principal occupation with the passage of time. As a former soldier, Loyola instilled the movement with a strict code of discipline based on military lines, and insisted on a rigorous period of training which, in some cases, could last as long as fifteen years. In 1541 he was elected General of the Order, a position which was later given the title of Black Pope because of the colour of the leader’s cassock. Among his writings were his Spiritual Exercises, a manual of methodical prayer, and the Order’s Constitutions, which included a special vow of obedience to the pope. Loyola was a sick man for many of his later years, and he died in Rome in 1556. He was made a saint by Gregory XV in 1632.

xxxxxThe Order of Jesuits became the 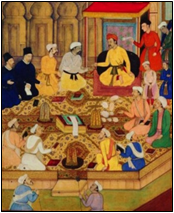 largest and most powerful order of the Roman Catholic Church and, in its early days, was the driving force of the Counter Reformation. Tasked with spreading the Gospel, by the year of Loyola’s death over 1000 Jesuits were working throughout Europe and parts of Asia, Africa and the New World. The illustration here shows two Jesuits in the House of Worship at Fatehpur Sikri during the reign of the Mughal Emperor Akabar, 1556 to 1605.

xxxxxDuring the 17th century the number of missionaries increased dramatically. By then large numbers were at work amongst the Chinese, Japanese and the North American Indians. In South America, parts of the state of Paraguay were virtually under the control of the Jesuits. Indeed, so powerful did the movement’s political influence become, that in the eighteenth century Jesuits were expelled from the Roman Catholic countries of Western Europe, and the Order was suppressed by Clement XIV in 1773. As we shall see, it was revived by Pope Pius VII in 1814 (G3c) and is at work today, but some countries have banned the order because of its alleged support for outlawed national movements.

xxxxxOne of the founders and most successful members of the Society was the Spanish missionary Francis Xavier (1506-52). In 1542 he went out to preach in Goa, and then extended his work into southern India, Ceylon (Sri Lanka), Malacca and Japan, setting up missions and converting thousands to the Catholic faith. In 1552 he attempted to reach China but died on an island just off the coast. A man of great courage and faith, today he is the “Apostle of the Indies and Japan” and the patron saint of navigators.

founder members of the Order, and one of its most successful, was the Spanish missionary Francis Xavier (1506-52). The movement having received papal approval, in 1542 he went out to preach in Goa, then in Portuguese India. So successful was his mission, that he extended his work into southern India and the island of Ceylon (now Sri Lanka). Having made thousands of converts in this region, he travelled to Malacca and from there established Christian communities in many of the surrounding islands.

xxxxxEncouraged by his success, in 1549, with two 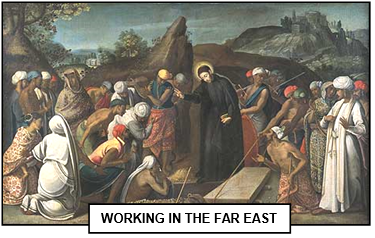 companions, he landed at Kagoshima in Japan, and within three years had established a thriving mission there. He now determined to bring the Christian Gospel to China. Travelling alone, he reached a small island named Sancian, just off the Chinese coast near Macau. From here he made several attempts to reach the mainland but failed to make the journey, and died on the island in December of that year. His body is enshrined in the Church of the Good Jesus in Goa.

xxxxxXavier was a man of great courage and determination. He had an abundance of energy and drive, and must be regarded as one of the greatest and most successful missionaries of all time. The Roman Catholic Church heaped many honours upon him in recognition of his outstanding achievements. He was made a saint in 1622, patron of the Orient in 1748, patron of the Faith in 1904, and patron of all missions in 1927. To many today he is the "Apostle of the Indies and of Japan" and the patron saint of navigators.