Osman I of the

xxxxxAs we have seen, with the death of Malik Shah in 1092, the Seljuk Empire went into decline. However a branch of the Seljuks survived in Anatolia (today’s Turkey), and in 1300 one of its petty rulers named Osman I united its people and declared independence, founding the dynasty that established the Ottoman Empire (from the Arab version of his name Uthman). He then advanced westward, seizing territory from the ailing Byzantine Empire. As we shall see (1345 E3), from these modest beginnings was to rise a mighty empire, one which was to play an important role in world history. 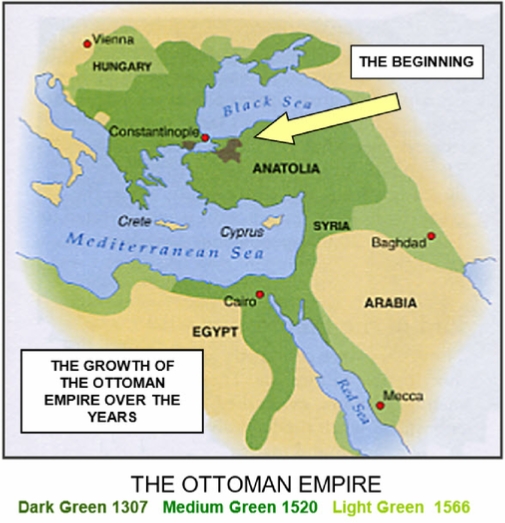 xxxxxAs we have seen (1071 W1), the Seljuk Turks were a nomadic group of fighters who originated in central Asia, but settled in the Middle East some time in the 9th century. Here they established a large Islamic empire, centred on Baghdad, and, following their victory over the Byzantines at the Battle of Manzikert in 1071, began the conquest of Anatolia (today’s Turkey). And it was the Seljuk Turks who, in the same year, moved into the Christian Holy Land and seized the city of Jerusalem.

xxxxxThe empire reached the height of its power under Malik Shah, the man who, by cutting the routes followed by Christian pilgrims on their way to Jerusalem, was responsible for the first crusade (which recaptured Jerusalem in 1099). With his death in 1092, the Seljuk Empire went into decline and had broken up within a hundred years. 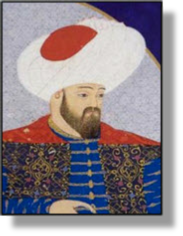 xxxxxHowever, a branch of the Seljuks did survive in Anatolia until the end of the 13th century, and it was around this time (1300) that Osman (1258-1324), the ruler of a small principality in NW Anatolia (modern Turkey), declared himself independent of the Seljuk sultanate of Iconium or Rum - served by his father for many years - and founded the dynasty that established the Ottoman Empire, (the name being derived from the Arabic version of his name - Uthman). With the aid of the Ghazis, a sizeable force of Islamic warriors, he then advanced westward against the ailing Byzantine Empire from his base at Sogut, capturing a number of fortresses, including the strategic stronghold at Yenisehir.

xxxxxAs we shall see (1345 E3), from these modest conquests was to arise a mighty empire which, over the next two hundred and fifty years, was to sweep through the whole of Asia Minor, overrun the Balkans, dominate the whole of the eastern Mediterranean, conquer the coastal regions of North Africa, and stretch into Persia, Iraq and the fringes of Russia and Europe. In the process it was to make quite an impact upon world history!