xxxxxIt was Suleyman I who brought the Ottoman Empire to the pinnacle of its power and prestige. As we have seen, by his victory at the Battle of Mohacs in 1526 (H8) he conquered most of Hungary and, three years later, came close to taking Vienna. After lifting the siege of this city, he began to extend his rule over the Arab states along the coast of North Africa. In the meantime, his capture of Rhodes in 1522 and his naval victory over a European fleet at the Battle of Preveza in 1538, had gained him control of the eastern Mediterranean. In 1565 he attempted to extend his naval supremacy by attacking the port of Valletta on the island of Malta. Here, however, the stalwart defence put up by the Knights Hospitaller (the Knights of St. John), and disagreement between his own commanders, led to a costly defeat. As we shall see, in 1571 a further defeat for the Turks at the Battle of Lepanto was to mark the beginning of the Ottoman Empire's decline. As a ruler, Suleyman proved an able administrator. He reformed the judicial and tax systems, and earned the title "Magnificent" for his talent as a poet and his patronage of the arts. He presided over the Ottoman Empire's golden age. 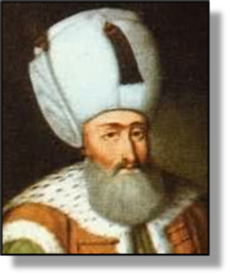 xxxxxAs we saw earlier, the capture of Constantinople by the Ottoman Turks in 1453, some 150 years after their modest beginnings under their founder Osman I, was but a prelude to greater territorial expansion. By the death of their ruler Mehmed II in 1481, the "Roman Caesar" as he called himself, the Ottomans were indeed on route to becoming a world empire. The vast area they controlled between the Aegean and Black Seas then served as a power-base for their next outstanding leader, Selim I. Becoming Sultan in 1512, it took him less than six months of campaigning to defeat the Safavids and Mamluks, thus bringing Egypt, Syria, Palestine and the Lebanon under Ottoman rule. 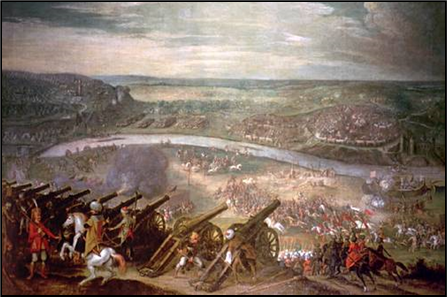 xxxxxBut as we have seen, it was Selim's son, Suleyman the Magnificent (illustrated above) who brought the empire to the pinnacle of its power and prestige. By the Battle of Mohacs in 1526 (H8) most of Hungary was made into a Turkish province. Then three years later he pushed further into Eastern Europe, laying siege to the city of Vienna (illustrated). Here his advance was checked. He had difficulty in bringing up supplies over such long distances, the muskets and long pikes of the defenders proved highly effective, and, nearer home, unrest was growing in Persia. He lifted the siege, pacified Persia, and then began a series of campaigns to conquer the Arab states along the coast of North Africa. Meanwhile, his fight against the West became a conflict at sea. The conquest of Rhodes in 1522, together with the naval victory over a European fleet at the Battle of Preveza in 1538, had given the Ottomans control of the eastern Mediterranean. Habsburg power now had to be challenged throughout the Mediterranean. 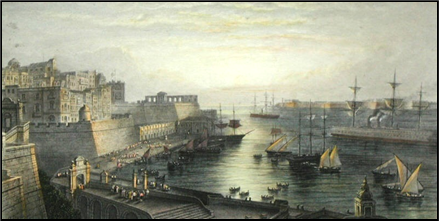 xxxxxIt was in 1565, after spending some time in dealing with troubles nearer home, that Suleyman turned to this task. Determined to put an end to the constant attacks upon his shipping by the Knights Hospitaller (the Knights of St. John based on Malta), and bent on procuring a good naval base into the bargain, he planned an attack upon the island’s port of Valletta (illustrated). In May of that year, confident of a speedy victory, he laid siege to the harbour with a large fleet of ships, his force outnumbering the Christian garrison by four to one. The Knights, however, under the leadership of their grand master Jean Parisot de la Vallette, made a valiant stand against repeated attacks. It proved to be one of the bloodiest and fiercely fought sieges in the history of warfare. In defending the fortress of St. Elmo, for example, just a few hundred men held out for over a month. When the stronghold was eventually overrun only nine defenders remained alive. 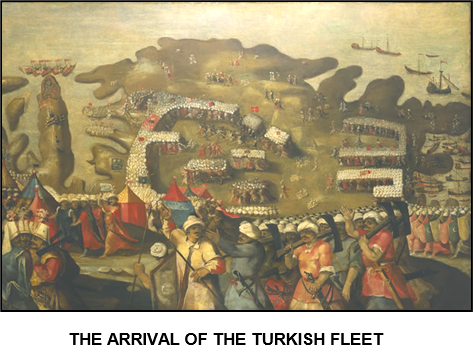 xxxxxMeanwhile, in the absence of Suleyman, a quarrel had broken out between the commanders of the land and naval forces over the tactics to be employed in taking the island. Enthusiasm for the enterprise began to wane. When, in September, a Spanish fleet arrived from Sicily to reinforce the Christian garrison, the Turks broke up in disarray, and only a quarter of their task force made it back to Istanbul. Despite this setback, a few years later the Turks went on to invade Cyprus. However, as we shall see, in 1571 the Battle of Lepanto was to mark the beginning of a long decline in the fortunes of the Ottoman Empire. By then Suleyman the Magnificent was dead and the empire's golden age was at an end.

xxxxxWhen not campaigning, Suleyman proved a good administrator. He was known as the "Lawgiver" amongst his people for the reforms he introduced in the judicial system and tax systems, whilst further afield he earned the title of "Magnificent" for his talent as a poet and his patronage of the arts. He brought the Ottoman Empire to the height of its power, but his defeat at Malta just a year before his death marked the beginning of a decline in the fortunes of the Ottoman Turks, a decline which was slowly but surely to gather pace.

xxxxxFollowing their victory, the Knights Hospitaller - also known as the Knights St. John and, from thence forward, called the Knights of Malta - set about fortifying the island's capital, named Valletta in honour of their grand master. Within a few years it had become one of the strongest fortresses in the entire Mediterranean. They remained as rulers until 1798 when Napoleon Bonaparte, on his way to Egypt, occupied the island. From then onwards the Order went into decline, but it was reconstituted in 1879 with the title of the Sovereign Military Order of Malta, and today it is employed in charity and medical work. The habit of the Order is a black coat bearing the Maltese eight-pointed cross in white.

(The Knights of St. John)