xxxxxAs we have seen, it was in 1818 that the British and American governments made the 49th parallel the boundary between Canada and the United States. In the west, however, this border only extended as far as the Rocky Mountains because the area beyond to the Pacific Ocean was still in dispute. In the War of 1812 the British had seized much of the territory, known as Oregon, and were anxious to keep it. In the 1830s, however, white settlement began in earnest, and by the 1840s thousands of settlers were arriving from the mid-west, travelling along the arduous Oregon Trail, a pioneer route some 2,000 miles long. They demanded that the region should be part of the United States, and in 1844 the American democratic president James K. Polk took up the slogan “Fifty-four forty or fight”, wanting to extend Oregon well beyond the island of Vancouver. Eventually a settlement was reached. The United States was involved in the Mexican War, and Britain faced a crisis in Ireland at this time, so both countries were anxious to avoid a border conflict. By the Treaty of Oregon in 1846 the border was extended along the 49th parallel to the channel that separates Vancouver Island from the mainland. This agreement was not liked by many on both sides of the new border, but it eventually came to be accepted. 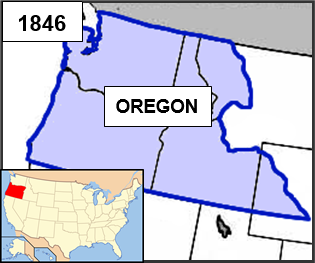 xxxxxAs we have seen, it was in 1818 that a convention between Great Britain and the United States made the 49th parallel (49 N. latitude) the boundary between Canada and the United States from the Lake of Woods, (some 300 miles west of Lake Superior) to the Rocky Mountains. The border further west, however, extending to the Pacific Ocean, was not then agreed, and thus the land west of the Rockies, known as Oregon, was left open to claim and counter claim, and provided the real possibility of a border conflict.

xxxxxThe Oregon coast had been sighted and indeed visited by a number of European seafarers, particularly Spanish and English, during the 16th and 17th centuries, including Francis Drake when searching for Spanish booty and a northwest passage in 1579. Later, in 1778, James Cook had chartered the coastal waters, but the first substantial claim to the territory was not made until 1792 when the American Captain Robert Gray, commanding the Columbia, sailed into the principal river, named it after his ship, and claimed the area for the United States - the same year, in fact, that the English navigator George Vancouver was surveying the Oregon coastline. Then In 1805 the Lewis and Clark Expedition also explored this area, 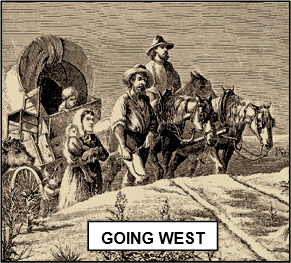 adding weight to the US claim, and by the mid-1820s France, Spain and Russia had surrendered any claim to the region. Not so the British, however. During the War of 1812, they had again taken control of territory as far south as the River Columbia. As a result, at the convention of 1818 the northern border of Oregon was not defined, and the area was left open to joint occupation.

xxxxxOver the next twenty years missionaries and fur trappers working for the North West and Hudson’s Bay Companies were active in the area. An American trading post was established at Astoria as early as 1811. But it was in the 1830s that white settlers began to arrive in significant numbers, and within a decade “Oregon fever” had set in. Attracted by rich farmland and a healthy climate, thousands began to arrive from the mid-west via the Oregon Trail, a pioneer route over 2000 miles long which started at Independence, Missouri, and ended up at Fort Vancouver. During the journey, which could take five to six months travelling by covered wagons, the families encountered great hardship. Many men, women and children died of illness or from Indian attacks. Nevertheless, by 1850 the population (not including Indians) had reached 12,000, many of the newcomers setting up farms in the fertile Willamette valley. “Go West, young man”, a phrase allegedly coined by the Indiana journalist John Soule, and popularised by the New York editor and writer Horace Greeley, did not fall on deaf ears.

xxxxxAnd with the growing number of settlers came the increasing demand for a settlement of the border. In the early 1840s, in an attempt to reach a favourable solution, the British offered to accept the 49th parallel as far west as the Columbia River, and then to use the river as the boundary to the Pacific Ocean. This, however, was roundly rejected. Indeed, the new American settlers demanded that U.S. territory be extended as far north as 54 40’, and in 1844 the Democratic party, led by president James K. Polk, took up his campaign slogan “Fifty-four forty or fight”, claiming that the whole of Oregon as then constituted should be U.S. territory. 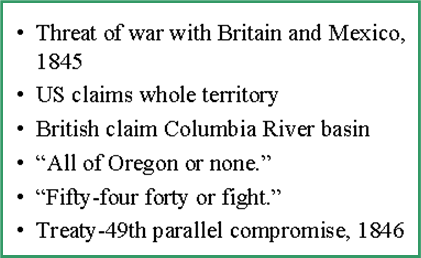 xxxxxA settlement was finally arrived at by the Oregon Treaty of June 1846, influenced in large part by the fact that the U.S. government was involved in the Mexican War at that time, and the British government was having to cope with a crisis in Ireland. Both countries were anxious to solve this border issue before it got out of hand. The Treaty resolved, therefore, that he 49th parallel was to be extended westward to the middle of the channel that separates Vancouver Island from the mainland. The British thereby lost the area of the Columbia River, but the Americans were denied control over Vancouver itself. It was not liked by many on both sides of the new border, but it was eventually accepted. Later, in 1853, the Washington Territory, which made up the northern area of Oregon, was granted separate territorial status (becoming a state in 1889) and Oregon, with its present boundaries, was admitted to the Union in 1859. 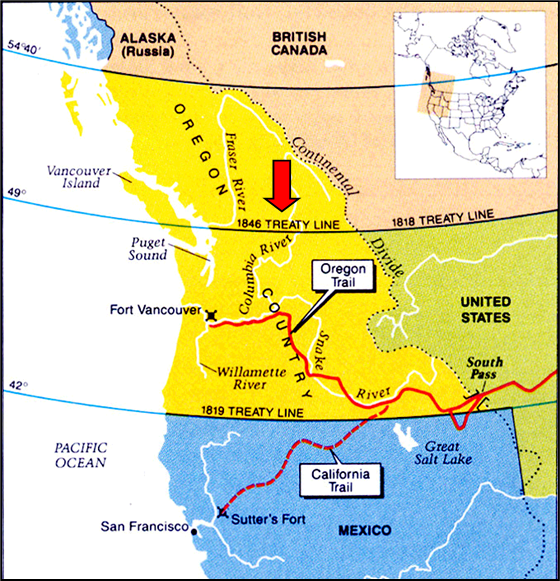 xxxxxThexcompletion of the Northwest Boundary Dispute was achieved by the Treaty of Washington, signed by the United States and Great Britain in May of 1871. It was then agreed that the San Juan Islands situated at the north end of the Puget Sound, claimed by both powers, should be included in the state of Oregon, i.e. the blue route (see map below 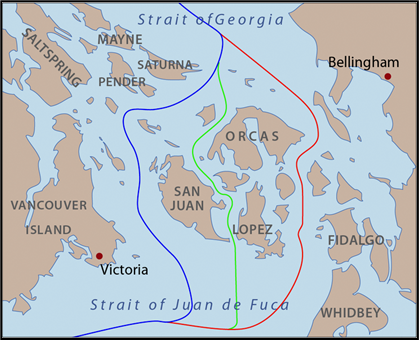