xxxxxAs we have seen, in 1793 (G3b) the Emperor Chi’ien Lung, in keeping with Chinese policy, rejected a British attempt to set up a trade agreement, seeing foreigners as “outside barbarians”. Over the many years of this closed-door policy only a few merchants had managed to settle in China. They had been confined to a strip of riverside outside of Canton, the only port open to the outside world, and subject to a host of petty restrictions. The British East India Company bought some commodities from China, including silk, porcelain and tea, and paid for these by importing opium from India. This trade in drugs was banned by the Manchu government in 1800, but continued illegally until 1839. In that year vast quantities of opium were destroyed, some merchants were taken hostage, and the others were forced to stop trading in this habit-forming drug. This brought a swift response from the British government. A naval expedition was sent to China in 1839, and quickly defeated the Chinese forces. Canton was stormed, and troops marched northwards from Macao, seizing key points along the coast, like Amoy, Ningpo, and Shanghai. By the Treaty of Nanking of 1842 the British acquired the island of Hong Kong and the use of five “treaty ports”, including Shanghai and Canton. Soon other Western nations were arriving to gain similar privileges. But the Chinese deeply resented the defeat of their forces, the arrival of the “barbarians”, and the continuation of the opium trade. Civil war broke out in 1850 - the Taiping Rebellion - and it was during this peasant uprising in 1856 that the British, this time joined by the French, again waged war against the Chinese in what came to be known as the Second Opium War. 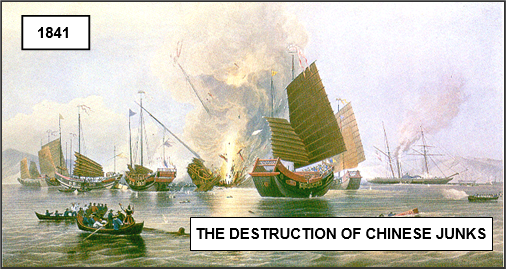 xxxxxThe first so-called Opium War between Britain and China had its origins in the “closed door” policy adopted by the Chinese over many years. As we have seen, in 1793 (G3b) the great Emperor Ch’ien Lung, who reigned from 1736 to 1796, had told a British trade mission that China had no need for manufactures by “outside barbarians”. Thus whilst the country’s vast resources were attractive to European merchants, particularly the British, the Peking government did not welcome foreign traders and placed severe restrictions on those who attempted to do business. All trade was confined to one port, Canton, and merchants could only stay during the trading season,

October to May. They were obliged to live and work in a riverbank area outside the city wall, were forbidden to travel inland, and were subject to a host of petty restrictions, and a Chinese law system which was often harsh and discriminatory. Furthermore the price of goods for export, particularly tea, was kept artificially high. The Chinese took the line that if the “Old Hairy Ones” wished to trade, then it had to be on Chinese terms.

xxxxxAnd trade with China was made further precarious by the method of payment. The British East India Company, for example, which had secured the monopoly of trade in the area, paid for its imports from China - silk, porcelain and, of course, tea - by means of opium, made from a certain type of poppy and transported from India. But opium was a habit-forming drug, and by the middle of the 18th century opium smoking in China was becoming a serious social problem. In 1800 the Manchu government banned its import but, by means of bribes to officials, the trade continued to flourish. Indeed, by the beginning of 1839 the annual import of opium had reached 40,000 chests - an eight-fold increase in the space of twenty years. 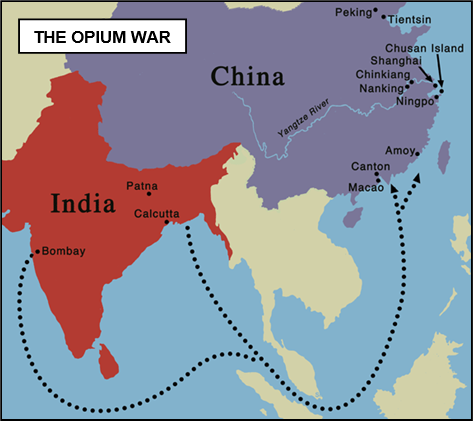 xxxxxIt was in that year that the emperor, Tao Kuang, decided it was time to act and sent an official to Canton in the March. He organised the burning of over 20,000 chests of the drug, and seized 16 merchants as hostages. The rest were kept in their quarters and made to sign statements that they would take no further part in the illegal trade. The British foreign secretary, Lord Palmerston, known for his gun-boat diplomacy, was outraged at the seizure of hostages, and concerned at the effect such measures would have on British trade. In November a fleet was despatched to the Far East. The first Opium War had begun.

xxxxxThe British expeditionary force, made up of 16 warships, was under the command of Rear Admiral George Elliot. It reached Hong Kong in June 1840, and then sailed northward to the mouth of the River Canton to negotiate with the emperor. No agreement was reached, however, and in the following year the island of Hong Kong was occupied, and an attack was launched upon the walled city of Canton itself. In the meantime a British force arrived at Macau and advancing northward, captured key points along the coast, including Amoy, Tinghai, Chusan, Chinhai and Ningpo. In these campaigns the Chinese proved no match for the British. Their army was poorly equipped and led, and during the conflict their government was faced with civil unrest. The end of the war came in 1842. Shanghai was taken in the Spring and with the fall of Chinkiang and Nanking, and the likelihood of a march on Peking, the Chinese sued for peace. 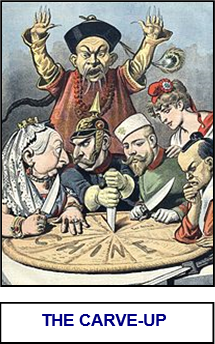 xxxxxThe Treaty of Nanking that followed, held in August 1842, was the first of what came to be known as the “unequal treaties”, a series of agreements over the next 16 years by which Western powers gained diplomatic rights and territorial concessions in China and, as we shall see, Japan. Byxthis treaty Britain acquired the island of Hong Kong as a secure trading base, and British merchants were allowed to reside and trade in five “treaty ports”, Shanghai, Ningpo, Foochow, Amoy, and Canton. And by a supplementary agreement, signed at the Treaty of the Bogue in October 1843, China was required to pay 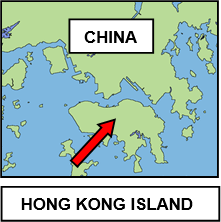 a huge indemnity - something like $21 million -, acknowledge British diplomatic equality, and grant the right of British citizens to be tried in British courts. Within a short time other Western countries were demanding and receiving similar privileges, like the Americans via the Treaty of Wanghia in July 1844, and the French by the Treaty of Whampoa later in that year. Given time, such Chinese concessions resulted in enclaves within the treaty ports wherein each foreign country conducted its own judicial system, police force and means of taxation.

xxxxxThe cost of the war against the British, the large indemnity they demanded at its end, and the influx of barbarian merchants, left China seething with discontent. A crop failure of 1849, and the famine that followed, proved the last straw, and triggered off a peasant revolt known as the Taiping Rebellion in 1850. This swept across South China and brought with it renewed hostility towards foreigners in general and the opium trade in particular, a problem which, be it noted, the Treaty of Nanking had conveniently failed to address. As we shall see, attacks upon their nationals in 1856 brought both British and French forces to China in a combined attack upon the Chinese. It was the start of the Second Opium War.

xxxxxIncidentally, the opening up of the treaty ports by the Treaty of Nanking in 1842 brought about an influx of Western writings on a wide selection of subjects. These had to be translated into Chinese and two scholars stand out in this respect: Yen Fu translated a large number of Western philosophical works into classical Chinese, and Lin Shu translated more than 170 Western novels. ……

xxxxx…… As we shall see, British control over the Island of Hong Kong was extended at the end of the Second Opium War (1856-1860). By the Tientsin Treaties, part of the Kowloon Peninsular to the north was ceded to the British, giving them command over the harbour. Further gains in this area were to come in 1898 (Vc).