xxxxxAs we have seen, following the death of Aurangzeb in 1707 (AN), the great Mughal Empire, formed by Babur in 1526, began to break up, and the end came with the sacking of Delhi by Nadir Shah, the king of Iran, in 1739. He had come to power in the early 1720s when his country had been overrun by the Afghans, the Russians and the Turks in 1722 (G1). As a local bandit chief, he seized power from the ruling but discredited Safavids and, in a series of brilliant campaigns, drove the invaders out of Iran. Then taking the imperial crown as Nadir Shah, he conquered Afghanistan and, entering northern India, won the Battle of Karnal and captured Delhi. Amongst the vast amount of treasure he took home from there was the peacock throne and, more than likely, the famous Koh-i-noor diamond. By now, his conquests had made him the most powerful ruler in the Middle East, but his despotism and incredible acts of cruelty won him few friends. Feared by all, in 1747 he was assassinated by a group of army officers. From then on the Empire went slowly but surely into decline. Meanwhile, as we shall see, in 1747 one of his commanders, Ahmad Shah Durrani was elected king of Afghanistan and began his own attacks upon northern India. 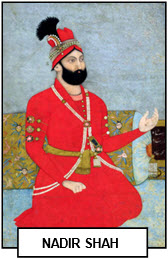 xxxxxAs we have seen, the death of its outstanding leader Aurangzeb in 1707 (AN) heralded the end of the great Mughal Empire, founded by Babur in 1526. Over the next thirty years central authority collapsed and the empire broke up into a large number of petty kingdoms and principalities. The coup de grace came in 1739 when Nadir Shah, the king of Iran, invaded northern India and plundered the capital city of Delhi. After that the empire - long noted for its artistic achievement and growing commercial development - went into rapid decline, with Northern India, in particular, a battleground between the Marathas, the Afghans, and the Sikhs.

xxxxxNadir Shah (1688-1747) made his name as a military commander in the 1720s, renowned particularly for his skill as a cavalry leader. It was in 1722 (G1), as we have seen, that the Afghans sacked the Iranian capital Esfahan, and that this, followed by invasions by both the Russians and the Ottoman Turks, brought an end to the Safavid dynasty. Russia occupied much of the northern part of the Iran, whilst the Turks took over the West. It was at this juncture that Nadir Shah, then known as Nadr Qoli Beg, a local bandit chief and leader of the Afshar tribe, appeared on the scene. He seized power from the defeated Safavids, and taking on the Afghans, drove them out of Iran by 1729 after a series of brilliant victories. Three years later he expelled the Ottoman Turks from Mesopotamia and, in the north, forced the Russians to give up their Caspian provinces. 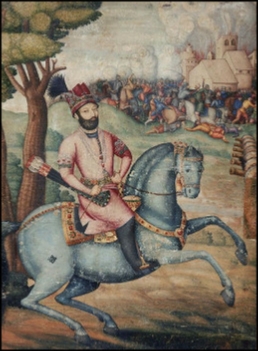 xxxxxItxwas then, having assumed the imperial title as Nadir Shah, that in 1738 he occupied Kandahar and conquered almost the whole of Afghanistan before moving into northern India. Here, in February 1739, he defeated the Mughal armies at the Battle of Karnal and then swarmed into Delhi (illustrated). Having sacked the city and slaughtered 30,000 of its inhabitants, he took a vast amount of treasure back to Iran, including the famous peacock throne of Shah Jahan and - if it were there for the taking - the magnificent Koh-i-noor diamond. He then went on to conquer the cities of Bukhara and Khiva in Uzbekistan, central Asia.

xxxxxThis extraordinary spate of victories made Nadir Shah the most powerful sovereign in the Middle East, with an empire stretching from the Indus River to the Caucasus Mountains. Some saw him as the "Second Alexander", and he was later to be dubbed the "Napoleon of Persia". However, unlike the Safavid dynasty he replaced, his was to be short lived. A despotic and incredibly cruel ruler - he blinded his own son and heir because he thought he was plotting against him - he made few friends and many enemies. His constant wars were a drain on the country's resources and called for ever increasing taxation. In the latter part of his reign there were numerous attempts to overthrow him and, eventually, in 1747, he was assassinated by members of his own army. We are told that they decided to "breakfast off him ere he should sup off them"!

xxxxxFollowing his death, there was a period of relative peace and prosperity during the Zand dynasty, but from the beginning of the next century there followed years of progressive decay. Meanwhile, as we shall see, Ahmad Shah Durrani, the commander of Nadir Shah's Afghan bodyguard, was elected shah of Afghanistan in 1747 and, like his master before him, cast covetous eyes upon northern India in general and the city of Delhi in particular.

xxxxxIncidentally, it would certainly seem that Nadir Shah was only interested in war and conquest. The story goes that once, when told that there was no such thing as warfare in paradise, he is alleged to have replied: "How then can there be any delights there?"

xxxxxThere is some doubt as to 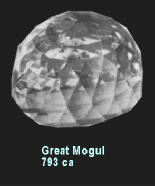 whether the Koh-i-noor diamond did come into the possession of Nadir Shah, but it is more likely than not. What seems fairly certain is that it ended up among the crown jewels of Queen Victoria! However, there was another big diamond going around at this time, the Great Mughal Diamond, a huge 787 carat rough stone discovered in the Golconda mines in 1650. This also appears to have been stolen by Nadir Shah, and one theory is that the Koh-i-noor was made from it. Yet another theory is that when he was assassinated, it was stolen (possibly by Ahmad Shah Durrani) and sold to an Armenian millionaire called Shaffrass who, in turn, sold it to the Russian Count Grigory Grigoryevich Orlov in 1774. He presented it to Catherine the Great to win her favour, and it was then cut to 280 carats and mounted in the Romanov imperial sceptre, where it remains to this day and is known as the Orlov Diamond. As for the peacock throne, this did go back to Iran, but was later stolen during a raid by the Kurds. They broke it up to get at its precious stones and metals.