THE NORMAN CONQUEST AND SETTLEMENT  (W1)

xxxxxHaving won the Battle of Hastings, William the Conqueror lost no time in securing his new kingdom. Starting in 1067, it took some five years to complete the conquest, the most difficult task proving to be the overthrow of Hereward the Wake and his men on the Isle of Ely. This achieved, he set about stamping his authority on all the affairs of church and state. French nobles replaced much of the English nobility, and French clergy took over from the English. A stricter and more efficient feudal and manorial system was introduced and a network of powerfully built castles ensured Norman authority would be respected. In addition, vast areas of England were granted to French nobles or taken over by William and his half-brothers. For their part, the English tried to lead their own lives, to speak their own dialects and to cling to their own history. It was to take many centuries before England could be regarded as a nation, but the Norman Conquest ensured one thing - that the country's future was to lie in the very heart of Europe.

xxxxxWilliam the Conqueror's first task after winning the Battle of Hastings was to secure his new kingdom. Starting in 1067, it took about five years, during which he ruthlessly put down a rebellion in the north - laying waste an area stretching from Durham to Chester in the so-called Harrowing of the North - and took personal control of the battle in the fens, eventually winkling Hereward the Wake and his followers out of their stronghold on the isle of Ely. By 1072 the Norman Conquest was virtually at an end and the Norman settlement could get under way. England was about to be governed more efficiently and more firmly than at any time since the Roman conquest over one thousand years earlier. 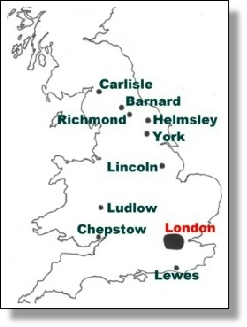 xxxxxPerhaps "settlement" is too soft a word - revolution might be more apt - because, having become king of England, William I, a determined and highly capable man, set about imposing Norman authority and efficiency on all the affairs of church and state. Norman institutions were to bring stability and discipline to what had been a troubled land. And as part of this reconstruction, English nobility were largely replaced by French nobility, English clergy were largely replaced by French clergy, and a much more rigid form of feudal and manorial system was introduced, based on the Domesday Book, that remarkable tribute to the Norman genius for administration. It is estimated that a third of all the land in England was granted to just fifteen nobles who had fought beside him at Hastings, and that he and his two half-brothers personally owned a quarter of the new kingdom. And to make his realm even more secure, in 1082 he summoned all the leading landowners to a meeting at Old Sarum (Salisbury) and there made them take an oath of allegiance to their king. It was a matter of loyalty or death.

xxxxxThus within 20 years of the battle of Hastings, vast areas of England were in Norman hands; the country was controlled by a network of huge castles, about 80 in number (some are named above); the church was endowed with some fine cathedrals; and the administration of church and state - based in part, it must be said, on existing Anglo-Saxon institutions - was in capable hands. As for the English, they had no love of Norman rule, its harsh laws and its heavy taxes. They tried to live their own lives, to speak their own dialects and to cling to their own history - mainly through the Anglo Saxon Chronicles, a series of writings written by monks from the 9th century and covering this period. It was to take many centuries before England could be regarded as one nation, and a few more before the emergence of Great Britain.

xxxxxThe Norman Conquest is generally regarded as a victory of the French over the English and let this be so, but it is worth noting that the Normans were, in fact, Vikings. As their name implies, they were Men from the North and, as such, they had only been settled in north-west France for some 150 years. There they had carved out for themselves a distinctive and highly organised and powerful state. Thus in 1066, when Harold II hurried southwards after defeating the Vikings who had invaded from the north, it could be argued that he was marching to confront a similar foe who had invaded his kingdom from the south! What is certainly true is that the Norman victory, originating as it did from France, brought England - and Wales and Scotland - into the centre of European affairs, away from the fringe involvement with Scandinavia which had dominated the Anglo-Saxon period.

xxxxxThe Feudal System was based on service and was practised before the Normans came, albeit in a less rigid form. The king granted his nobles land and, in return, they were obliged to pay him taxes and provide him with fighting men. Alongside this medieval structure was an agricultural system of land tenure, centred around the manor house and its grounds. In this "Manorial System", the lord parcelled out his land to the peasants and they farmed their own strip in return for money, crops and a set period of labour. Most of the peasants were "tied to the land", that is, to their lord, and it was he who kept everybody in their rightful place and administered justice. William I laid claim to all the land in his kingdom, and made a detailed survey of it in his Domesday Book.

xxxxxIn simple terms, the Feudal System was a means whereby the barons or nobles were granted land by the king (often for their loyalty or active support) and, in return, had to pay him taxes and provide the men to fight his battles outside or within the kingdom. The task of assembling this fighting force fell upon the knights who, in turn, were granted land from their lords. By way of payment, they had to give their masters a minimum of 40 days of military service each year and to provide a certain number of soldiers from the workers (vassals) on their estates whenever the need arose. 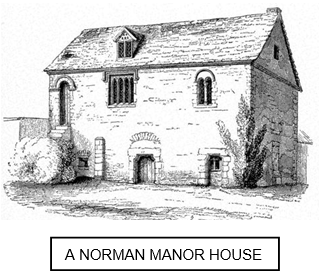 xxxxxAlongside this medieval structure - which was generally confined to the nobility and was mainly to do with the provision of military service - was an agricultural system of land tenure which was based on the peasant farmer or serf and was centred around the manor house and its grounds. In this ordered pattern of life, often referred to as the Manorial System, the land belonging to the lord of the manor was parcelled out to individual peasants (known as villeins or broders) and these were allowed to farm their strip in return for money, crops and services. They were obliged to work on their lord's land, the demesne, for two or three days a week but, if they had cattle of their own, they could graze them without payment on the meadow or "common" land. Justice was dispensed by the lord of the manor and in many cases the peasant was "tied to the land", unable to seek work elsewhere without his lord's permission. It was a way of life in which everyone knew their place and had to keep in it!

xxxxxThe Normans did not introduce the feudal and manorial systems into England - some elements of both systems were present long before their arrival - but they certainly gave them a powerful shot in the arm and greatly strengthened their effectiveness. King William’s claim to all the land in his new kingdom was made abundantly clear, reinforcing the monarch's control over his nobles and Church leaders, whilst the Domesday Book, that detailed survey of land usage throughout most of England, gave him the means by which he could both tighten his grip on the nation's economy and share in its growing prosperity. It was a system which, with varying degrees of efficiency, was to last well into the thirteenth century, and much later in some European states.

xxxxxIncidentally, one of the best preserved Norman manor houses in England is to be found in the village of Boothby Pagnell in Lincolnshire. And the village of Laxton in Nottinghamshire has the last remaining open field system still in use in the United Kingdom.

xxxxxAs one would expect, the Norman Conquest had a marked effect upon language. English became a mixture of Anglo-Saxon and Norman French. Changes came with the passing of time, but even to this day the British monarch gives assent to an Act of Parliament with the words La Reyne (or le Roi) le veult. 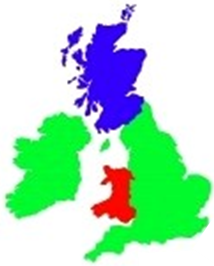 xxxxxWilliam I had no designs on Wales. Having gained the English throne and overcome resistance to his coming, he was anxious to get on with the task of administrating his new kingdom and overseeing Normandy. However, Welsh incursions into England in support of attacks upon his rule forced his hand. He installed Norman barons along the border lands (the “Marches”) and invaded the principality in earnest in 1081, but it was not before 1094, in the reign of his successor William II, that some measure of authority was achieved. Furthermore, within a few years, despite the efforts of Henry I - the last of the Norman kings - the Welsh had regained control over much of their country. As we shall see, it was not until 1272, during the reign of the Plantagenet King Edward I that the conquest of Wales was begun and the entire region was eventually forced to submit to English rule.

xxxxxAs far as Scotland was concerned, William was obliged to invade the country in 1072 in order to make sure of his hold on his new kingdom. One of the principal claimants to the English throne, Edgar Aetheling, having been defeated by William in the battle for Northumbria, had fled to Scotland and conveniently secured Scottish support by the marriage of his daughter Margaret to the Scottish king, Malcolm III. This posed a threat William could not ignore, though, as it turned out, it was not of long standing. A sizable force having reached Abernethy, some eight miles south-east of Perth, Malcolm chose to concede. He recognised William as the rightful king of England, and surrendered up his son Duncan as hostage to the agreement. The Normans lost little time in moving into Scotland. Castles were built, noble families were founded, and the Norman feudal system was established over much of the country.

xxxxxAn Anglo-Norman invasion of island of Ireland, a land of petty kingdoms, did not take place until 1170 in the reign of the Plantagenet King Henry II. As we shall see, he authorised the Anglo-Norman Lord, the Earl of Pembroke (known as Strongbow) to begin the conquest of the country and, for a while, much of Ireland was under Norman influence. By the late 15th century, however, The Pale, an area around Dublin, was the only part of the island that remained subject to the English crown.