xxxxxIt was in 1866 that the Swedish chemist and engineer Alfred Bernhard Nobel - famous as the instigator of the Nobel Prizes - discovered the means of making nitroglycerine much less volatile by mixing it with kieselguhr, a soft chalk-like powder. He called this mixture dynamite - from the Greek word dynamis meaning force - and ten years later produced gelignite, a jelly-like substance which was even more powerful and easier to handle. These new, safer substances, along with reliable detonators, gave birth to an enormous industry, meeting the needs of mining companies, construction works and military establishments all over the world. By 1875 Nobel was fast becoming one of the first international giants of industry, supervising factories in the United States and in countries across Europe. Having amassed a huge fortune, towards the end of his life he decided, for one reason or another, to reward those who in future years “conferred the greatest benefit on mankind”. As we shall see, in 1895 (Vc) he financed annual prizes in chemistry, physics, medicine, literature, and the promotion of international peace. 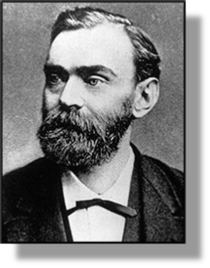 xxxxxThe Swedish chemist and engineer Alfred Bernhard Nobel is remembered today for the creation of the Nobel Prizes, awarded annually to people who have “conferred the greatest benefits on mankind”. Bequeathed in his last will of 1895, and introduced in 1901, these prestigious awards were able to be financed from the huge fortune he made from the manufacture of explosives following his invention of dynamite in 1866 and gelignite in 1875. He became in his life time one of the first international giants of industry.

xxxxxNobel was born in Stockholm and was educated at St. Petersburg where his father, a military engineer, was working on underwater mines and torpedoes for the Russian government. After gaining a good knowledge of chemistry from local tutors, and the fundamentals of engineering from his father, he spent a year in Paris studying chemistry and then travelled in Western Europe and the United States. While in America he studied for a time under John Ericsson, the Swedish-born engineer who had invented  the screw propeller a few years earlier and, later, was to construct the armoured warship Monitor that fought during the American Civil War.

xxxxxOn returning to St. Petersburg Nobel worked in his father’s factory, but with the end of the Crimean War in 1856 the demand for munitions virtually dried up, and the company was declared bankrupt three years later. The family returned to Sweden, and it was then that Nobel began working on the development of explosives based on the adaptation of liquid nitroglycerine. This chemical compound, discovered by the Italian chemist Ascanio Sobrero (1812-1888) in 1846, was well known for its explosive properties, but it was extremely volatile and thus very difficult to handle. Indeed, In the experimental stage serious accidents occurred, the worst being in 1864 when his factory at Helenborg, near Stockholm, was destroyed by an explosion, and Nobel’s younger brother Emil and four others were killed. 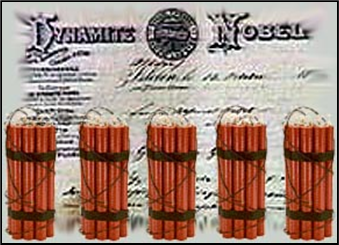 xxxxxIn 1866 Nobel finally found a comparatively safe way of handling nitro-glycerine. He discovered that when mixed with a material known as kieselguhr - a soft chalk-like powder - the liquid in nitroglycerine was absorbed and its volatility was greatly reduced. The following year he patented this mixture and gave it the name of dynamite - from the Greek word dynamis meaning force - though for some years it was known as “Nobel’s safety powder”. Further experiments over the next ten years produced gelignite, a transparent, jelly-like substance which had a greater blasting force than dynamite, but was even less sensitive to shock. Then in 1887 he invented and patented ballistite, a smokeless gunpowder made up of two high explosives. And alongside these improvements went the construction and perfection of detonators, enabling the explosives to be activated at a safe distance by a simple means of firing.

xxxxxThe discovery of dynamite - first demonstrated in 1867 at a quarry in Redhill, Surrey, England - gave birth to an immense industry. Orders for this explosive and its subsequent improvements flooded in from mining companies, construction works and military establishments all over the world. By 1875 Nobel was supervising factories in the United States and in almost every country in Europe. One of the largest amongst these was the plant built in Ardeer, Scotland, in 1871. Within a matter of years the Swedish chemist was a multi-millionaire. And to his achievements in the development of explosives must be added his research into the manufacture of artificial silk, leather and rubber, and his work in other branches of science, including biology and optics. 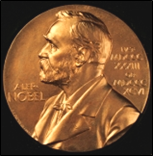 xxxxxToday, however, Nobel’s significant contribution as a scientist is scarcely known by the public at large. He is almost exclusively remembered for his prestigious Nobel Prizes, first awarded in 1901. As we shall see, it was in 1895 (Vc), that,  for one reason or another, the man who, willy-nilly, had invented (for those days) a weapon of mass destruction, left the bulk of his fortune - some £3.25 million - to reward those who, in the future, “conferred the greatest benefit on mankind”. The five annual prizes that he financed for outstanding achievement in chemistry, physics, medicine, literature and the promotion of international peace were to be his abiding legacy. 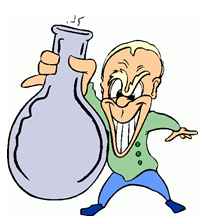 xxxxxIncidentally, experimenting with nitro-glycerine proved to be a highly dangerous occupation. Apart from the tragic accident in 1864, there were a series of other mishaps, including the destruction of a factory in Germany and the United States, an explosion aboard a ship off Panama, and incidents of blast damage in San Francisco, New York and Australia. Some countries, like Belgium and France, put a ban on nitroglycerine, whilst others, such as Sweden and Britain, severely restricted its use. At one time Nobel - dubbed a true “mad scientist” - did his research on a river barge to minimise the damage from any explosion! ……

xxxxx……  Ballistite, invented by Nobel in 1887, was a precursor of cordite, a more powerful propellant which was being developed in the United Kingdom at about the same time by the  chemists Sir Frederick Abel and James Dewar. Nobel claimed that his patent on ballistite covered cordite, but this was strongly contested by the British government and he lost his case in 1895.

xxxxxIt was in 1866 that a new and deadly sea weapon was produced, the self-propelled torpedo. The invention of the English engineer Robert Whitehead (1823-1905), then managing a shipbuilding company at Fiume on the Adriatic coast (today’s Rijeka in Croatia), it was commissioned by the Austrian Imperial Navy. Known at this stage as a minenschift (mine ship), it was propelled by compressed air and designed to travel under water and detonate on striking the hull of an enemy ship. Improvements followed. Two years later he incorporated a hydrostatic valve and pendulum to ensure that the weapon kept at a pre-set depth, and in 1876 he used a servo-motor to increase speed. Then in 1896 a gyroscope was fitted to improve direction. Initially the torpedo had a speed of 6 knots over some 700  yards, but by 1890 speeds of around 30 knots were being reached. In 1869 the British Admiralty showed an interest in the weapon. Production was begun at Woolwich, London, in 1872, and Whitehead opened a factory near Portland Harbour, Dorset, in 1891.

xxxxxIncidentally, the name torpedo was coined by Robert Fulton, the American inventor who designed the Nautilus, the first practical submarine, in 1801.  As we have seen, he also developed an underwater contact mine during the Napoleonic Wars and named it after a fish th 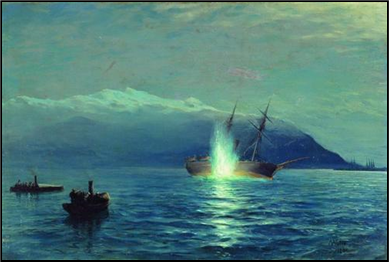 at emits an electrical discharge. It was later attached to a long pole as a means of reaching the hull of an enemy vessel, but it did not prove very effective. ……

xxxxx…… The first vessel to be struck by a Whitehead torpedo was the Turkish steamer Intibah, sunk during the Russo-Turkish War of 1877 (illustrated).  ……

xxxxx…… Whitehead also designed pumps to drain the Lombardy marshes in northern Italy, and made notable improvements in the manufacture of silk-weaving looms.