xxxxxDespite their defeat at the Battle of Marston Moor in 1644, the Royalist continued to go on the offensive and they met with some success. In the meantime, however, Parliament was forming its New Model Army, some 20 disciplined regiments of horse and foot. This was put to good use in the next encounter, the Battle of Naseby, south of Leicester, in 1645. Once again, Prince Rupert opened the attack and quickly gained the advantage by driving Parliament’s left wing off the battlefield. However, the New Model Army stood firm in the centre while Cromwell’s cavalry broke through the enemy’s lines and then, turning, attacked their rear. By the time Rupert returned to the fight the Royalists were in retreat. This Parliamentary victory was followed by another at Langport and the capture of Bristol. The king, fearing the worst, fled north and gave himself up to the Scots, but in 1647 they passed him over to Parliament and a few months later the Army seized him. He eventually ended up in Carisbrooke Castle on the Isle of Wight, and it was from here that he secretly negotiated an agreement with the Scots. As we shall see, they invaded the north of England in 1648 and this led to the Battle of Preston - and disaster for the king. 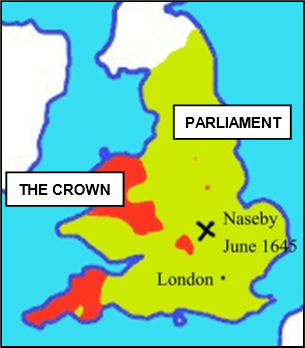 xxxxxAs we have seen, despite their defeat at the Battle of Marston Moor in 1644, the Royalists continued to go on the offensive, meeting with some success over the following year. In the meanwhile, however, Parliament's General Fairfax, with the aid of his second-in-command, Lieutenant General Cromwell, was forming the New Model Army, a highly-disciplined force of more than twenty regiments of horse and foot. When the next major encounter occurred in June 1645 it was put to good use.

xxxxxThe Battle of Naseby, fought some 20 miles south of Leicester, was a decisive victory for the Roundheads, and brought the first phase of the Civil War to an end. Both armies commanded high ground and faced each other across a wide valley called Broad Moor. Although outnumbered, the Royalists, again led by Prince Rupert, opened the battle and, attacking all along the line, quickly gained the advantage. Rupert's cavalry broke through Parliament's left wing and, forcing the Roundheads to retreat, pursued them towards the village of Naseby. But the departure of Rupert's cavalry from the battlefield at this crucial time was a fateful error. The New Model Army, under the command of General F 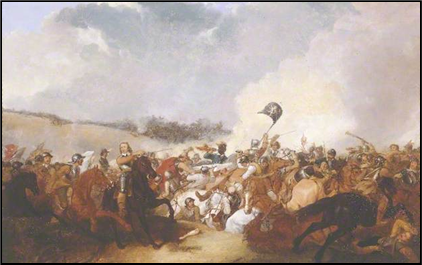 airfax, stood firm in the centre and right wing, while Cromwell's cavalry again proved decisive, routing the forces opposite them and then turning to attack the Royalist infantry from the rear. The king attempted to bring up his reserves, but sensing the battle was lost, their commander led them off the field. By the time Prince Rupert had returned from the chase, the battle was over. By comparison with earlier battles, Royalist casualties were light - some 1,000 killed -, but all their artillery was lost and the 5,000 men captured made up some of the king's finest infantry regiments.

xxxxxCharles made for Leicester, but his depleted forces were defeated there a few days later. The following month the only remaining Royalist force of any size was crushed by the New Model Army at the Battle of Langport in Somerset, and in September Prince Rupert (illustrated) was forced to surrender Bristol, the king's stronghold in the West. Charles returned to Oxford in the November, but by the spring of 1646 the city was surrounded by Parliamentary forces and he realised that, for the present at least, the Royalist cause was lost. Disguised as a servant, and with two companions, he escaped towards the end of April and, hoping he might do a deal, gave himself up to the Scottish Covenanters at Newark the following month. But, as part of an agreement, when the Scots left for home in January 1647, they handed the king over to Parliament for a handsome sum of money, and he was taken to Northampton. Here he lived a comfortable life, but not for long. In June, a military contingent of some 500 men captured him and carried him off to the army's headquarters at Newmarket. In the aftermath of war, the king had become a precious bargaining counter in a bitter dispute now surfacing between Parliament and the New Model Army, a new and powerful force in English politics. 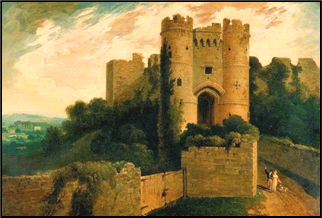 xxxxxIn August the army marched on London and the king was taken to Hampton Court. In November he managed to escape, but plans to get him to France failed, and he was forced to take refuge on the Isle of Wight, where he was held under house arrest in Carisbrooke Castle (illustrated). From here, however, he negotiated with all three adversaries - Parliament, the army leaders, and the Scots -, making the wildest of promises to gain support. In December 1647 he eventually succeeded in reaching a secret agreement with the men of his northern kingdom. As we shall see, the second phase of the Civil War was about to begin with a Scottish invasion in 1648 and the Battle of Preston, but it was to be of short duration and of little comfort to a beleaguered king. 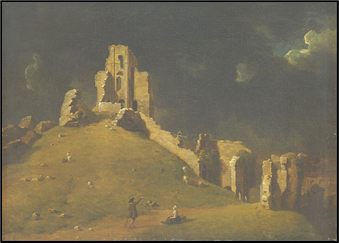 xxxxxIncidentally, it was around this time - February 1646 - that the Roundheads eventually succeeded in capturing the royalist stronghold of Corfe Castle in Dorset. In May 1643 they had sent a party of 40 men to take away the four small cannons within the castle’s walls, but Lady Mary Bankes, - her husband away fighting for the king - had other ideas. Assisted by just five men and her maid servants, she opened fire from the battlements and drove the party away. In June, as was to be expected, a larger force of 600 men arrived to take the castle, but by that time Lady Bankes had recruited 80 loyalist fighters and, despite some damage to the walls, the invading force was driven off with the loss of 100 dead. It was not until the end of 1645 that what amounted to a small Parliamentary army arrived and the bombardment was resumed. Eventually in February 1646 Lady Bankes was betrayed by one of her defenders, and the Roundheads gained access to the castle. The garrison was forced to surrender, but the lives of Lady Bankes and her men were spared because of the courage they had shown. The heroine of Corfe Castle lived long enough to see the restoration of the monarchy in 1660. In the meantime, however, in March 1646 Cromwell gave orders for the castle to be destroyed, and the illustration shows what remains of it today.