xxxxxAs we have seen, it was in 1852 (Va) that Charles Louis Napoleon, nephew of Napoleon Bonaparte, was proclaimed Emperor of France as Napoleon III. At first his domestic policy was brutally autocratic, but by 1860 he began to introduce liberal reforms aimed at a form of parliamentary democracy. Furthermore, he modernised the nation by a series of public works, and introduced an enlightened policy towards free trade and the development of French agriculture and industry. In foreign affairs, too, he began by making an impressive start. In 1855 he emerged triumphant from the Crimean War and, four years later, his victory against the Austrians at the Battle of Solferino helped towards the unification of Italy. However, adventures further afield during the 1860s proved a drain on his country’s resources. He set up a colony in Indochina, attempted to take over Korea, and then suffered a humiliating defeat in North America. Having established Maximilian, a Habsburg prince, upon the throne of Mexico in 1862, the republican opposition, aided by the United States, began to gain the upper hand and forced him to withdraw his troops in 1866. As we shall see, his Empire eventually came to an end with the defeat of France in the Franco-Prussian War of 1870, and he spent his last years in exile in England. 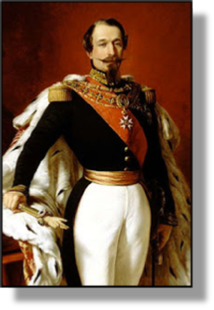 xxxxxAs we have seen (1852 Va), it was in December 1848, following the overthrow of King Louis Philippe, that Charles Louis Napoleon, son of Napoleon Bonaparte’s brother Louis, swept to victory as president of the Second Republic. Having made two previous, highly unsuccessful attempts to seize power in France, it was third time lucky for the young Napoleon. However, as rightful claimant to the imperial heritage, being president was clearly not enough. In 1851, acting on a trumped up excuse that the nation was in danger from an internal conspiracy, he seized complete control of the country and ruthlessly crushed any Republican or socialist opposition. Then in December 1852, not without a great deal of public support, he was proclaimed Emperor of France. The Bonapartes were back in power and the Second Empire had begun.

xxxxxFor the next eight years or so, having despatched political prisoners to penal colonies, Napoleon kept a firm, autocratic grip on home affairs. Nonetheless, opposition to his regime grew, fuelled by a deterioration in the country’s economic condition, and by 1860 he saw the need to make some concessions towards a more representative form of parliamentary government. Within ten years, in fact, in fulfilment of his promise to provide “reasonable freedom”, France had moved some way towards a constitutional monarchy, though in all matters the Emperor retained ultimate authority.

xxxxxAnd within that decade Napoleon played a prominent part in using state funds to institute a vast programme of public works - including the rebuilding of Paris and the completion of the national railway system - and to improve the rights and living standards of the working population. Meanwhile in economic matters he encouraged the development of industry and agriculture, came out in favour of the movement towards free trade, and negotiated a series of commercial treaties with foreign competitors to stimulate French trade overseas. His government was certainly not without its share of corruption and incompetence, but by 1870, it must be said, France had became known as the “Liberal Empire”, a powerful nation on the road to prosperity.

xxxxxBut whilst his domestic policy achieved a substantial measure of success, his foreign policy brought about his downfall. In his first years as Emperor he looked for military glory, like his uncle before him, and, in the short term, he found it.  Allied with Great Britain he emerged triumphant from the Crimean War in 1855, and in his support for Italian independence he defeated the Austrians at the Battle of Solferino in 1859, gaining respect as a field commander and adding the territories of Savoy and Nice to his empire. But from the early 1850s he also embarked upon a series of colonial adventures, and these stretched the country’s military resources. These romantic forays included an unsuccessful attempt to modernise Algeria - in French hands since 1830 -, the establishment of a colony in Vietnam, a protectorate over Cambodia, and an unsuccessful naval operation to seize the Korean peninsula. He fought alongside the British in the Second Opium War, and at one stage sent a military mission to Japan to assist the Shogunate troops in their fight - their unsuccessful fight - against imperial forces in the Boshin War of 1868-1869. 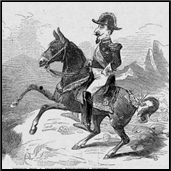 xxxxxOvershadowingxthese colonial adventures, however, was his disastrous attempt to create a French-backed monarchy in Mexico. Anxious to establish his influence in North America (and profit from the presence of mineral wealth!), in 1862 he sent out an army to support Maximilian, a Habsburg prince who had agreed to become the country’s monarch. For the next two years, assisted by a strong body of monarchists, the war against the republicans 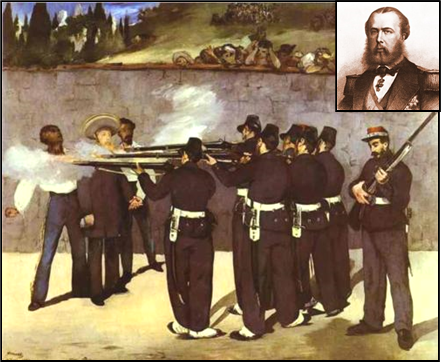 went well, and Maximilian was duly installed as  “Emperor” in April 1864. However,xwith the end of the American Civil War the following year, the United States began to send aid to the republican cause, led by Benito Juarez (1806-1872), and the tide began to turn against the French. Indeed, the situation became so grave that in 1866 Napoleon decided to withdraw his troops, ostensibly to strengthen his defences at home. Maximilian, left at the mercy of his opponents, was eventually captured and executed in June 1867. The whole affair left Napoleon humiliated and with few if any friends in the courts of Europe. (The cartoon depicts Napoleon striding across North America on his Mexican mule, and the painting of the execution was the work of the French artist Édouard Manet.)

xxxxxMeanwhile In Europe, where security mattered most, Napoleon totally misjudged both the political and military situation. The swift victories achieved by Prussia in their wars with the Danes and the Austrians, and the move these achieved towards German unification, should have alerted the French government to a changing and threateni 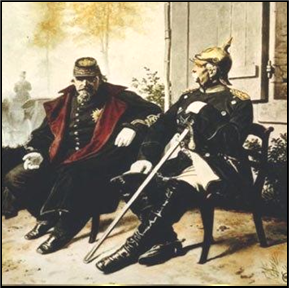 ng situation, but the warning signs went virtually unheeded. Indeed, Napoleon, convinced of France’s invincibility, and determined to cut Prussia down to size, played into the hands of the Prussian foreign minister, Otto von Bismarck. Provoked into declaring war following a dispute over the candidature for the Spanish throne, the Franco-Prussian War of 1870, as we shall see, ended in the total defeat of the French army and Napoleon’s capture and fall from power. Illustrated here is Napoleon’s meeting with Bismarck after his humiliating  surrender.

xxxxxOn his release, he spent his last years with his wife and young son at Chislehurst, England, ever haunted by his military failure, and the collapse of the country he endeavoured to serve so well. He died in January 1873, not living to see the death of his only legitimate son Eugene, killed in 1879 while fighting in the British army against a Zulu uprising in southern Africa. In 1873 Napoleon was buried at the Catholic Church at Chislehurst, but i 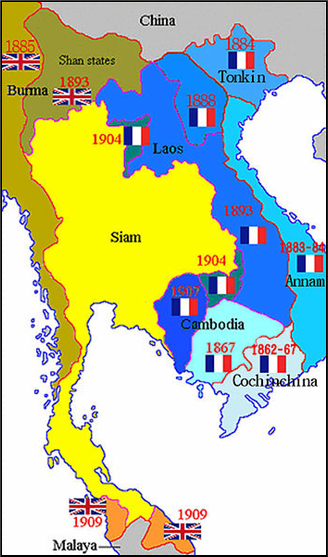 n 1888 his body, and that of his son, were transferred to an Imperial Crypt at St. Michael’s Abbey in Farnborough, Hampshire, a resting place provided by his wife Eugenie.

xxxxxUnderstandably, Napoleon attracted a great deal of adverse criticism. Victor Hugo, one of his harshest critics, dubbed him Napoleon le Petit, and Karl Marx described his reign as nothing short of a farce. In fact, he did much to enhance the status of France, both by his domestic policy and his early ventures on the world stage, but in the end, it must be said, he did bring about the total collapse of the proud nation under his charge, and that fact was never likely to be forgotten or forgiven.

xxxxxIncidentally, the establishment of a French colony in the southern part of Vietnam in 1867 - Cochin-China -, together with a protectorate over the neighbouring land of Cambodia, marked the beginning of French Indochina. As we shall see, after a successful war against China, - the Sino-French War of 1884-5, - the colony of Indochina (Vietnam and Cambodia) was formed in 1887 (Vc), and Laos was added in 1893 after the Franco-Siamese War of that year. The federation lasted until 1954. On the map, French Indochina is shown in various shades of blue.