xxxxxThe Edict of Nantes, which ended the French Wars of Religion, begun in 1562, only gave partial religious freedom to the Huguenots. It was granted by their leader Henry of Navarre who, having acceded to the throne of France in 1589, astutely decided to become a Roman Catholic four years later, thus opening the way to a settlement. By 1598 he was able to grant the Protestants liberty of conscience and political freedom, and to give them the right to build their own churches and - save for specified areas - hold their own services. Protestants also retained a number of fortified cities, and a “Chamber of the Edict” was established to protect their rights. However, many Catholics strongly opposed this settlement and ignored parts of it. Furthermore, as we shall see, the government minister Cardinal Richelieu, attacked the Huguenots in 1628 (C1), and then amended the terms of the Edict. And even worse was to come in the reign of Louis XIV.

Stamp: French commemorative stamp, issued in 1998 to mark the four hundredth anniversary of the Edict of Nantes. 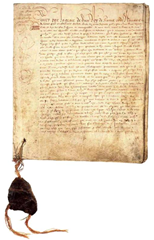 xxxxxThe Edict of Nantes, in fact, only gave partial religious freedom to the Huguenots. As we have seen, it ended the French Wars of Religion, a series of bitter religious conflicts between Catholics and Protestants which had raged over France for close on forty years. With the accession to the throne of the protestant Henry of Navarre in 1589, the struggle seemed likely to continue for another decade or two, but in 1593 he chose to became a Roman Catholic - an astute political move - and this opened the way to a settlement. By 1598, having gained control of Paris, he was virtually in charge of the country and was in a position to issue the terms of a religious settlement, hammered out with the Huguenots.

xxxxxPrivileges had been granted to the Protestants during this long series of wars, but the treaties made were never put into practice or were totally nullified with the outbreak of further conflict. The Edict of Nantes included these privileges and added to them. The Huguenots were granted liberty of conscience throughout the country. They were allowed to build their own churches and hold their own services save in a number of specified areas, such as the centres of major cities, near royal residences, and within a five mile radius of Paris. Like Catholic priests, however, Huguenot pastors were to be paid by the government. As regards civil rights, they were permitted to hold government offices, and places of learning were assigned to them. 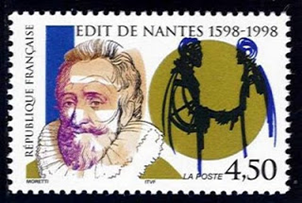 xxxxxIn order that these rights be protected and any disputes could be settled peacefully, a special court, the "Chamber of the Edict", was established in the parliament of Paris, made up of ten Catholics and six Protestants, and similar courts were set up in the provincial parliaments. In addition a number of fortified cities - like La Rochelle and Montpellier - were retained by the Huguenots for a period of eight years so that their rights could be defended should the need arise.

xxxxxThe edict was much resented by the pope, Clement VIII, and the Roman Catholic clergy in France felt that it had gone too far in its granting of religious and political freedom. In the event, not all of these provisions were fully implemented and, as we shall see, the chief minister of King Louis XIII, Cardinal Richelieu, attacked the Huguenots in 1628 (C1) and amended the edict in the following year, reducing some of the civil liberties granted to them. But far worse was to befall the protestant cause in France during the reign of Louis XIV.

xxxxxIncidentally, the word "huguenot" (a French protestant) possibly comes from a corruption of the German word eidgenossen meaning "confederates" (i.e. members of a particular group).