xxxxxAs we have seen, it was in 1553 (E6) that the English navigator Richard Chancellor reached Archangel in the search for a north-east passage to the Far East. From here he travelled overland to Moscow and met up with the Russian emperor Ivan IV. Having made a trade agreement with the Tsar, on his return Sebastian Cabot and a number of other London merchants established the Muscovy Company in 1555. Granted a monopoly in Anglo-Russia trade, it became a highly successful enterprise. Other attempts were made to find a north-east passage by seamen like Barents, Hudson and Bering, but it was not until 1879 that the Swedish explorer Adolf Erik Nordenskiöld succeeded. 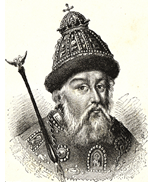 xxxxxAs we have seen, it was the English navigator Richard Chancellor who, as part of an expedition sent out by the explorer Sebastian Cabot to find a north-east passage to China, managed to reach Archangel in 1553 (E6). From here he travelled overland to Moscow and, being well received by the Tsar, Ivan IV (illustrated), set up trading contacts with Russia. 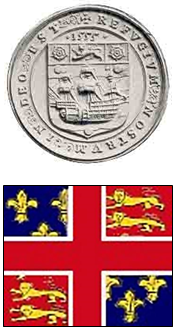 xxxxxFollowing his return, Cabot, together with a number of London merchants, set up a trading company with Russia in 1555. Known as the Muscovy Company, it was granted a monopoly of Anglo-Russian trade, and became a highly successful enterprise. Exports to Russia included metals, woollen cloth and goods from the Mediterranean, and traders returned with hemp, cordage and wax tallow. Illustrated here are the company’s seal and flag.

xxxxxIndeed, so lucrative did this trade become, that for a time very little thought was given to the idea of the north-east passage. However, a further attempt was made during this reign. Inx1556 the English navigator Stephen Borough (1525-1584) reached the entrance to the Kara Sea in the Searchthrift, but could go no further because of thick ice.

xxxxxAs we shall see, despite the hostile conditions posed by this arctic route, further attempts were made by such dedicated seamen as Barents, Hudson and Bering, but it was not, in fact, until 1879 that a Swedish explorer, Adolf Erik Nordenskiöld, succeeded in finding and, more to the point, sailing through the north-east passage.