xxxxxAs we have seen, it was around 1235 (H3), that Sundiata took control of the Susu Clan. He then went on to establish the Mali Empire in West Africa, destroying what remained of the ancient Kingdom of Ghana. Over the next 80 years the empire, growing rich from its command of the trans-Saharan trade routes, expanded to the north and south. Impressive evidence of the empire's power and wealth came in 1324 when Mansa Musa, the empire's most successful leader, went on a pilgrimage to Mecca, accompanied by 60,000 men and carrying some 3,000 pounds of gold in a baggage train made up of 80 camels. By the end of his reign the empire covered a vast area of western Sahara, and Timbuktu had become a thriving commercial city and a centre of Islamic culture. However, with the death of Musa around 1335, the empire began to break up. Eventually, the Songhai Empire, an area which had been subdued earlier, began to re-assert itself. As we shall see, in 1464 (E4), under its able leader Sonni Ali, it embarked on a policy of expansion and, within a few years, had become the dominant force in the area. 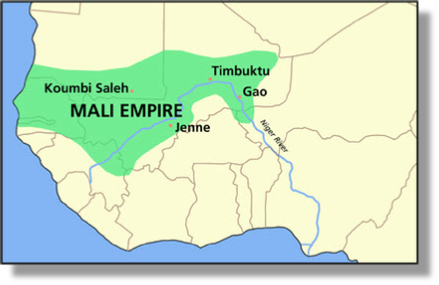 xxxxxAs we have seen earlier, it was around 1235 (H3) that Sundiata, one of the leaders of the Malinke people in western Sahara, won a decisive victory over the Susu clan at the Battle of Kirina, and took over their ailing kingdom. Within a few years Sundiata had consolidated his rule and formed what came to be known as the Mali Empire. In 1240 he razed the capital city of Kumbi Saleh to the ground, thus destroying the last vestige of the ancient Kingdom of Ghana, and soon afterwards moved his capital to Niani. This new site was on the trade routes across the Sahara, and soon became a major commercial centre in the Sudan. Meanwhile, his generals began to expand southwards towards the gold-producing lands of Bondu and Bambuk, north-west towards Diara, and northwards along the River Niger.

xxxxxOver the next eighty years the empire flourished, expanded and grew very wealthy. Proof of this came in 1324 when the then ruler, Mansa Musa, the most successful leader of the Mali Empire, gave an impressive demonstration of his wealth during a pilgrimage to the Muslim holy city of Mecca. Controlling the richest goldmines discovered at this time, he impressed the rulers of north Africa by the size and opulence of his glittering procession, and his fame quickly spread throughout the Middle East and Europe. It is said that he had over 60,000 men in attendance, some 10,000 of whom were personal slaves, and that his baggage train was made up of 80 camels each carrying some three hundred 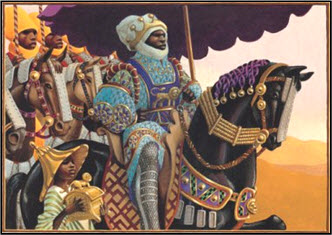 xxxxxBy this time, such abundant wealth had created a huge empire in the western Sahara, occupying an area comprising modern Senegal, Gambia, Mali and southern Mauritania. It formed, in fact, one of the largest empires of the day. And even while Mansa Musa (illustrated) was on his travels, his territory was extended further by the conquest of the Songhai Empire and the capture of its capital Gao on the southern edge of the Sahara. In this city and the nearby centre of Timbuktu the Mali leader had magnificent mosques built. And it was under his guidance that Timbuktu became a great centre for Muslim learning and culture as well as a commercial metropolis on the caravan routes across the Sahara.

xxxxxAfter the death of Emperor Musa, somewhere between 1332 and 1337, and the succession of his son Magha, the empire began to go into decline, its size proving too much for its political and military strength. The Songhai Empire now began to re-assert itself and, as we shall see, under its able leader Sonni Ali, embarked on a policy of expansion in 1464 (E4). First the city of Gao was captured, followed by a number of outlying areas. In 1471 the Songhai leader, Sunni Ali, overran the eastern area of Mali, and his successor Muhammad Toure virtually conquered the rest. Thus the Songhai Empire became the new dominant force in this area, and was to remain so for the next hundred years - until the coming, that is, of the Moroccan army. 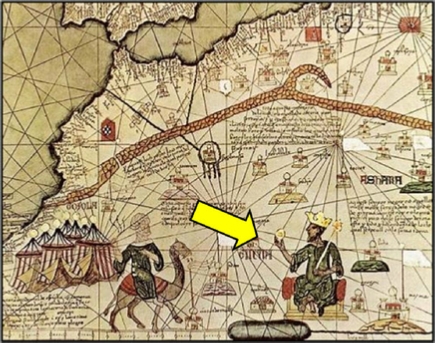 xxxxxIncidentally, according to one eye-witness, an historian named al-Umari, when Emperor Musa visited Cairo on his way to Mecca, he spent so much gold in the market there that the Egyptian currency was drastically devalued and had not fully recovered twelve years later! ……

xxxxx…… Such was the impact made by Mansa Musa’s epic journey to Mecca that fifty years later a portrait of him (here illustrated) appeared on the Catalan Atlas of 1375, together with a caption describing him as Lord of the Negroes of Guinea, “the richest and most noble king in all the land”. The atlas, the work of the Jewish cartographer Abraham Cresques and his son Jehuda, was made up of 12 sheets of parchment mounted on wooden panels that could be folded into a screen. It provided a remarkably accurate map of the world as it was known a century before the discovery of the New World. It was commissioned by Peter IV of Aragon, the then ruler of the Mediterranean island of Majorca (where the Cresques lived), and when completed he sent it as a gift to Charles VI, King of France, in 1381.