xxxxxIt was in the latter part of the fourteenth century that the Songhai Empire of West Africa, once overshadowed by its powerful Mali neighbour, began to re-assert itself, based around the wealthy trading city of Gao. As we have seen, when its ruthless but able leader Sunni Ali came to power in 1464 (E4) the time was ripe for expansion. He occupied Timbuktu and, having restored the lucrative trade routes across the western Sahara and expanded his territory into parts of Mali, he spent the remainder of his reign extending his borders at the expense of the local tribesmen, notably the Mossi, Fulani and Tuareg. 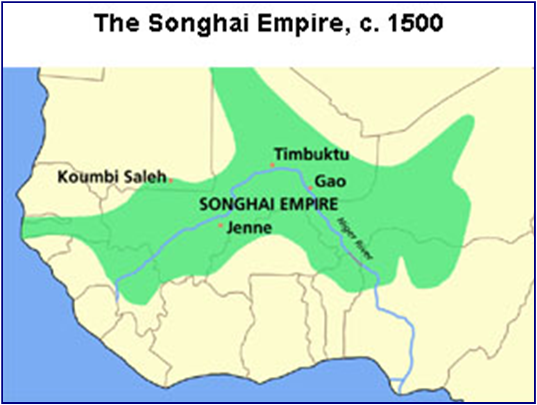 successor, Askia Muhammad I, the Songhai reached the height of their power and influence. The full extent of his territorial gains is not clear, but it is said that “by fire and sword” he carved out an empire that, at its height, included parts of modern Guinea, Senegal, Mali, Mauritania, Niger and the Hausa states of Nigeria, conquered in 1512. What is clear is that he had a remarkable flair for effective administration. He divided the empire into a number of provinces, each with a governor, and appointed directors to deal with specific state affairs, such as finance, agriculture, and justice. Under his leadership Timbuktu became a thriving cultural centre once more, and Islam was made the official religion of the ruling classes. As we have seen, his pilgrimage to Mecca, made in 1496 (H7), testified to the efficiency of his state as well as to the wealth of his empire.

xxxxxMuhammad’s fall from power was a 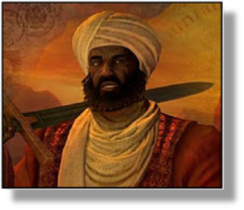 tragic one. In 1528 the great leader was overthrown by his eldest son Musa, and banished to a mosquito-infested island in the River Niger. Here, old and virtually blind, he spent the last ten years of his life as a witness to the bitter power struggle by which his children were tearing the empire apart. Eventually, in 1537 his third son, having seized power, recalled his father to Gao. It was here that he died the following year. His tomb still stands, described as a pyramid of earth surmounted by wooden spikes.

xxxxxDue in no small way to the sound administrative system established by Muhammad (illustrated above), the Songhai remained the dominant force in the area for some years after his death, but bitter disputes over the succession and an increasing number of raids from neighbouring states greatly weakened the empire. As we shall see, the end came in 1591 (L1) with the coming of the Moroccan army, equipped with firearms and bent on conquest.

xxxxxThe Songhai Empire of West Africa began to grow in strength towards the end of the 14th century. As we have seen, on coming to power in 1464 (E4), its able leader Sunni Ali captured Timbuktu, restored the lucrative trans-Sahara trade, and seized land from his neighbours. Under his successor, Askia Muhammad I, the empire reached the height of its size and power, culminating in the defeat of the Hausa states of Nigeria in 1512. His sumptuous pilgrimage to Mecca in 1496 (H7) testified to his wealth and prestige. In 1528, however, he was overthrown in a power struggle between his sons, and the empire went into decline. It eventually came to an end in 1591 (L1) with the coming of the Moroccan army.