xxxxxThe Italian physician Giovanni Battista Morgagni was appointed professor of anatomy at Padua University in 1715. He carried out some 700 post mortems, and during these operations he studied the connection between particular diseases and the physical changes occurring in certain organs. Based on these findings, his treatise On the Seats and Causes of Diseases, published in 1761, laid the foundations for the branch of science known as pathological anatomy. This work dealt especially with those diseases associated with the heart, lungs and liver, but he also studied other parts of the body, including the brain. 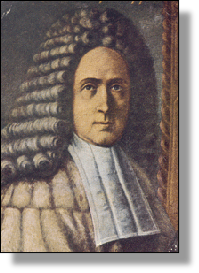 xxxxxThe physician Giovanni Battista Morgagni was born in Forli, northern Italy, and studied medicine and philosophy at Bologna. After graduating in 1701, he spent some time assisting his fellow countryman, the anatomist Antonio Maria Valsalva (1666-1723), in the production of his major work The Anatomy and Diseases of the Ear, published in 1704.

xxxxxIn 1710 he was appointed professor of medicine at Padua University, and five years later was promoted to the chair of anatomy. It was here, in the process of conducting some 700 post mortems, that he came to make a close study of the connection between particular diseases and the physical changes occurring in 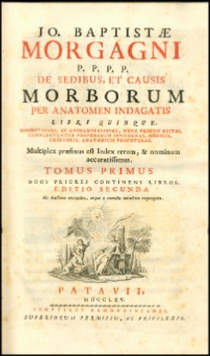 certain organs. As a result, his major treatise, On the Seats and Causes of Diseases Investigated by Anatomy, produced in 1761, laid the foundations of the branch of science known as pathological anatomy. In particular, this work contained important data as to the effects of disease on three vital organs, the heart, liver and lungs. It covered, for example, ailments affecting the valves of the heart, cirrhosis of the liver, and the congestion of the lungs.

xxxxxAn earlier work by Morgagni, his Adversaria Anatomica, completed in 1719, had already established him as a competent anatomist. He was, for example, the first anatomist to discover that in cases where paralysis has affected one side of the body, the lesion responsible is situated on the opposite side of the brain. And his research also extended knowledge relating to the male urethra, the female genitals, and the glands of the windpipe.

xxxxxIn 1775 the Austrian physician Franz Anton Mesmer (1734-1815), concerned like Morgagni to eradicate disease, put forward his theory of "animal magnetism". He claimed that an invisible fluid flowed through the body, and that if this were obstructed, illness would occur. However, a skilful operator (namely Mesmer!), using a magnetised object, could induce a state of trance during which the vital flow would be restored. Accused of being a fraud, he was driven out of Vienna but, for a time, he made a good living in Paris. Eventually in 1785 Louis XVI appointed a commission - which included the American scientist Benjamin Franklin and the French chemist Lavoisier - and "mesmerism" was found to have no basis in science. Discredited, the treatment came to an end, but in the mid 19th century the English physician James Braid renamed it hypnotism and, under strict conditions, it is now recognised as therapeutic. 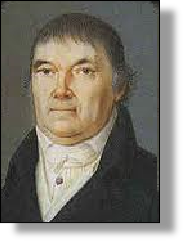 xxxxxIt was just a few years after the publication of Morgagni's major work in 1761 that the Austrian physician, Franz Anton Mesmer (1734-1815) - likewise concerned with eradicating disease - came up with the idea of "animal gravitation", arguing that the pull of gravity affected human health. In 1775, however, he modified this theory and came up with "animal magnetism". This held that an invisible fluid flowed through the body and that disease was caused by an obstruction to this flow. However, by the use of any magnetised object, in the hands of a skilled operator (namely Mesmer!), a state of trance could be induced during which the vital flow would be restored along with the patient's good health. 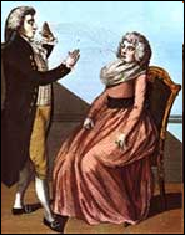 xxxxxAs one might imagine, such a method, bordering as it did on the occult, caused a stir, particularly among the medical fraternity. The physicians of Vienna, where Mesmer happened to be living at the time, accused him of being a fraud and drove him out of the city. He settled in Paris in 1778, and here he made a very comfortable living, despite protests from the local medical profession. Eventually, however, in 1784 King Louis XVI appointed a commission of physicians and scientists to investigate "mesmerism". This august body, which included the French chemist Antoine-Laurent Lavoisier, and the American statesman-cum-inventor Benjamin Franklin, could not support Mesmer's methods scientifically, and this unorthodox treatment slowly but surely went out of fashion.

xxxxxMesmer was doubtless a charlatan, and his "treatment" could be harmful to say the least. Some of his patients whom he managed to "mesmerise" ended up having convulsions or fits of delusion. Thisxsaid, others did find the treatment of some value - probably the result of mind over matter - and whilst mesmerism became discredited, it proved to be the forerunner of hypnotism, a method made more respectable by the English physician James Braid (1795-1860) in the middle of the 19th century, and now acknowledged as being therapeutic when employed under strict conditions. 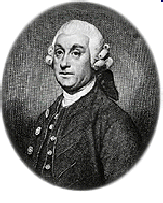 xxxxxIncidentally, in England during this period one of the most distinguished physicists of the day was Percivall Pott (1714-1788). Senior surgeon at St. Bartholomew’s Hospital, London, his surgical writings included articles on ruptures, head injuries, fractures and dislocations. In 1779 he published a detailed clinical description of tuberculosis of the spine, and this came to be known as “Pott’s disease”. In 1765 he opened his lectures to all students of the hospital, and these proved extremely popular.