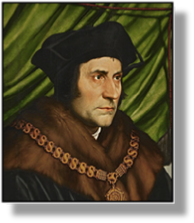 More, son of a prominent London judge, showed remarkable talent at an early age. He studied the classics at Oxford University, and then became a law student at Lincoln’s Inn, London. For a time he contemplated becoming a monk, taking part in the strict life of a local Carthusian monastery, but he eventually decided upon a political career. As soon as he came of age he obtained a seat in parliament where he soon found favour with the king for both his wisdom and wit. He was sent on several foreign missions to the Low Countries, was knighted in 1521, and made speaker of the House of Commons two years later. Such was the esteem in which he was held that, at the fall of Thomas Wolsey in 1529, he was appointed Lord Chancellor. The illustration is a detail from Holbein’s portrait of 1527.

xxxxxHe excelled in the duties of this high office, but in 1532 his career came to an abrupt end. A man of God and a devout Roman Catholic, he would accept no diminution of papal supremacy. He had earlier opposed the king’s divorce from Catherine of Aragon, and he now objected to his marriage to Anne Boleyn, refusing to attend her coronation. Two years later, fully aware of the possible consequences, he refused to take the oath of allegiance to Henry as supreme head of the new Church of England. Very close though his friendship with the king had been, he was imprisoned in the Tower of London, tried for treason, and beheaded in 1535. In the highly charged times of the Reformation the opposition of so prominent a figure to Henry’s designs could not be tolerated. While in prison he wrote A Dialogue of Comfort against Tribulation, an inspiring work of Christian faith, and meeting his death with great dignity, declared that he was dying “in the faith and for the faith of the Catholic Church”. There are monuments to him in Westminster Hall and the Tower of London, and he was made a saint in 1935. 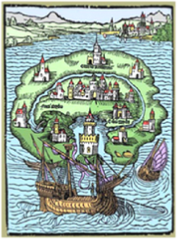 xxxxxAs a writer he is best known for his book Utopia, a sort of political romance in which he describes a perfect state, situated on an imaginary island (illustrated) in the South Seas. Written in Latin in 1516 and printed on the continent, it was translated into English in 1551. In marked contrast to the intolerance and inequalities of contemporary life, Utopia is a kind of Christian communist state based on reason. It subordinates the interests of the individual to those of society as a whole, regards land and accommodation as common property, provides universal education, and advocates religious toleration. All citizens wear the same clothing, each of the 54 towns are identical in design, and “bondmen” - those who break the law - do the menial jobs, such as serving the communal meals. In its day, the book proved highly influential, and its title (coined in Greek to mean “a good place”) is used to this day to conjure up the idea of an ideal society.

xxxxxAmongst his other works was a History of Richard III (a source and inspiration for William Shakespeare) and a number of religious treatises directed against the views of protestant reformers, such as Martin Luther and William Tyndale. As a man versed in the classics, he was influenced by the humanist John Colet, and established a close friendship with the Dutch scholar Desiderius 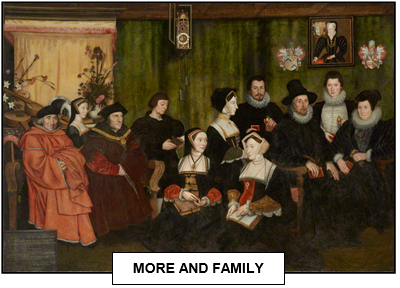 Erasmus, who wrote his In Praise of Folly while staying at his home in 1509. He was also a patron of the arts, and was instrumental in having the German painter Holbein appointed as the king’s court painter.

xxxxxIncidentally, like many notables of the day, Erasmus was deeply shocked by the manner of More’s death. He regarded him as a genius and a man whose soul was “more pure than any snow”. His description of him in the phrase omnium horarum homo was later interpreted as “A Man For All Seasons” and became the title of Robert Bolt’s play about More, produced in 1960.

xxxxxAs a member of parliament, Thomas More found favour with the king and was sent on several diplomatic missions. At the fall of Wolsey he was appointed Lord Chancellor. However, as a devout Roman Catholic - he had once thought of being a monk - he opposed the king's divorce from Catherine of Aragon and, two years later, refused to take an oath of allegiance to Henry as head of the English Church. He was charged with treason and beheaded. While in prison he wrote A Dialogue of Comfort against Tribulation, a profound work of Christian faith, but he is best remembered today for his book Utopia, published earlier in 1516. In this he described the perfect state, where land is held in common and there is religious toleration. Among his other works are History of Richard III (which was used by Shakespeare), and a number of tracts against religious reformers like Martin Luther and William Tyndale. He was influenced by the humanist John Colet, and was a close friend of the Dutch scholar Desiderius Erasmus.

xxxxxAlso executed in 1535 for his opposition 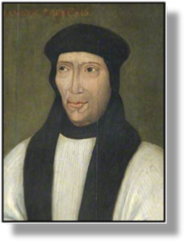 to the English Reformation was the Roman Catholic prelate John Fisher. He was born in Beverley, Yorkshire, in 1469 and studied at Cambridge. He became chancellor of the University in 1504 and as such invited his friend, the Dutch humanist Erasmus, to teach Greek at Cambridge. He was also instrumental, via his patron Lady Margaret Beaufort (mother of Henry VII), in the founding of the two Cambridge colleges, Christ Church and St. John.

xxxxxFisher was appointed Bishop of Rochester in 1504. Like More, he was strongly opposed to the king's divorce from Catherine of Aragon, and he refused to recognise Henry as the supreme head of an independent English Church. Together with Thomas More, he was imprisoned in the Tower of London and beheaded in June 1535, just a few days before Thomas More's execution. Like More, he was made a saint in 1935, and they share the same feast day.

xxxxxThe Roman Catholic prelate John Fisher (1469-1535), like Thomas More, refused to accept the king's divorce from Catherine of Aragon, or his claim to be head of the English Church. He was beheaded a few days before More's execution. He was also a close friend of the Dutch humanist Desiderius Erasmus, and he was instrumental in the founding of the two Cambridge colleges of Christ Church and St. John.