xxxxxThe French writer Michel de Montaigne is known for his essays, a form of writing which he made popular. His Essais were published in four volumes, the third in 1588 and the last after his death in 1595. They covered many aspects of everyday life, seen from the viewpoint of a cultured country gentleman. Although he lived a somewhat sad life during the troubled years of The French Wars of Religion, his writings show an immense amount of tolerance, kindness and sensitivity, and on whatever subject he was writing - be it religion, education, friendship, pain or the fear of death - he made no attempt to hide his innermost feelings. His works had a profound influence on other French writers, such as Molière, Rousseau, Voltaire and Diderot, and he inspired intellectuals like Francis Bacon, Descartes, Pascal and Hobbes. William Shakespeare quotes directly from his Essais in his play The Tempest, and they were especially admired by two 19th century essayists, Hazlitt and Leigh Hunt. 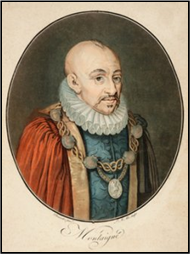 xxxxxThe French writer Michel de Montaigne is best known for his essays, a form of writing which he virtually created himself. Four volumes were published in all, the first two in 1580, the third in 1588, and the last after his death in 1595. These short pieces - 107 chapters in total - proved particularly popular, covering as they did so many aspects of everyday life, and written for the most part in a mildly sceptical tone. They were interesting not only for their subject matter, but also for what they revealed about the character of the writer himself.

xxxxxHe was born in Bordeaux of a wealthy family and received a good classical education. After studying law, he was appointed a councillor in the regional parliament, thus following in his father's footsteps. Always interested in writing, he did some translation and editing work during these early years, but in 1571 he inherited the family estate and retired to his chateau in Périgord, devoting most of his time to reading and the writing of his Essais. Then after touring Germany, Switzerland and Italy in the early 1580s, he returned home to serve two terms as the mayor of Bordeaux.

xxxxxMontaigne lived in troubled times and his life was not a particularly happy one. The French Wars of Religion raged over his country, and he was deeply saddened by the death of his close friend Étienne de La Boétie in 1563, and then by that of his father five years later. His marriage was not very successful, all but one of his children died young, and for many years he led a lonely life. As a result, there is little humour in his work, and certainly no joie de vivre. What does shine through, however, is an extraordinary amount of tolerance, a great deal of kindness and sensitivity, and a burning desire to search out knowledge for himself and not blindly accept the dogmatic conclusions of others. 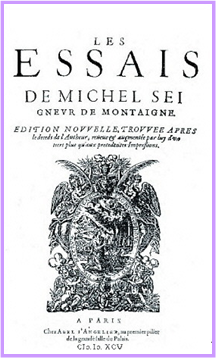 xxxxxThe essays vary enormously in length, subject matter, depth and mood, and range from contemporary subjects such as religion, education and the use of torture, to the telling of classical stories, and matters of a very personal and sensitive nature such as friendship, pain, sex, and the fear of death. Such subjects are rarely studied in isolation. Each essay might have an original theme, but this is quickly swallowed up and sometimes obscured by the introduction of a large number of unrelated topics. These personal meditations are of a cultured country gentleman. They reveal a man who hated religious bigotry, and was totally opposed to cruelty in any form. His enlightened view can also be seen in his advanced attitude towards education. What needed to be developed, he argued, was an enquiring mind, assisted by travel. Education was not a simple matter of book learning, but a gradual growth of knowledge through one's own practical experience. As he put it: "As lamps are extinguished from too much oil, so is the mind from too much studying".

xxxxxThese personal Essais by Montaigne, written as though in conversation, and providing, in effect, a detailed self-portrait, introduced a new literary genre into European literature. As such they had a profound influence on a number of future French writers, notably Molière and Rousseau. And by reason of their content, both Voltaire and Diderot regarded Montaigne as a precursor of the Age of Enlightenment - and understandably so. 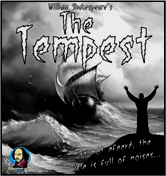 xxxxxFollowing their translation into English in 1603, such intellectuals as Francis Bacon, Descartes, Pascal and Hobbes found inspiration from them, and William Shakespeare quotes directly from them in his play The Tempest. They were also much admired by the two nineteenth century essayists Hazlitt and Leigh Hunt. The latter came as close as anyone to pinpointing Montaigne's special contribution to the world of letters when he wrote: "He was the first man who had the courage to say as an author what he felt as a man".