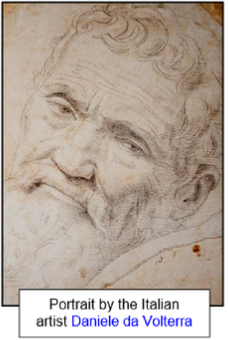 seen (1504 H7), Michelangelo was apprenticed to Domenico Ghirlandajo at the age of 13 and worked for a time in the household of Lorenzo the Magnificent. With the expulsion of the Medici family from Florence in 1494, he also left the city and, after spending two years in Bologna, settled in Rome. It was here that he produced two of his many masterpieces, the larger-than-life Bacchus, and the exquisite Pietà for St. Peter’s Basilica.

xxxxxIt was after his return to Florence in 1501 that he undertook his colossal marble figure of the young biblical David, a work that became a symbol of his native city and an outstanding example of Renaissance art. Also to this period belongs the Holy Family, and preparatory drawings for a vast battle scene, planned for the new council hall but, like so many of Michelangelo’s works, never completed.

xxxxxIn 1505 he was summoned to Rome to take part in a vast undertaking, the magnificent tomb for Pope Julius II. Its completion, however, was long delayed, partly because in 1508 Michelangelo began work on one of his most ambitious projects, the painting of the barrel-vaulted ceiling in the Sistine Chapel. Being a sculptor at heart, he took on this task rather reluctantly, but when completed in 1512 it was to become, together with Leonardo da Vinci’s Mona Lisa and Last Supper, one of the three best known paintings in the world. 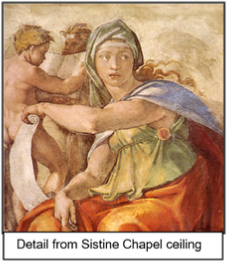 out of jealousy, the architect Bramante was anxious that Michelangelo should be given this commission, convinced that he would fail in the attempt. The exact opposite was the case. Working with some assistance, he finished the work in an amazingly short time - despite the difficulty of spending long hours working above his head - and the work was hailed as one of the world’s greatest masterpieces. It provides a vast panorama of the Book of Genesis in nine crowded compositions, including the Creation of the World, the Fall of Man, and The Flood. In this complex but brilliantly designed vista, each massive and vibrant figure is a testimony to his skill as a painter and his masterly understanding of human anatomy. The overall effect is breathtaking.

xxxxxHe painted the ceiling - 600 square yards of it - standing on scaffolding (not lying down) and his eyesight was affected for months afterwards because of his having to look upwards for long periods at a time. In a comic verse to his friend, Giovanni da Pistoia, he complained about paint dripping down onto his face, and likened his bent body to a “Syrian bow”. Despite months of physical discomfort, he completed the ceiling with little assistance, and when it was unveiled, the whole world, wrote Giorgio Vasari, the art historian, was “speechless with astonishment”. (See ceiling below.)

xxxxxThe work once finished, Michelangelo, then aged 37, returned to his beloved sculpture. He continued work on his impressive Moses, the central figure for the Julius Tomb - now very much reduced in size and grandeur - and then produced the famous set of nude sculptures representing Day and Night, and Morning and Evening for the Medici chapel in San Lorenzo, Florence. But his reputation as a painter, now very firmly established, meant that he was in demand by those he could hardly afford to refuse.

xxxxxIn 1534 he returned to the Sistine Chapel, 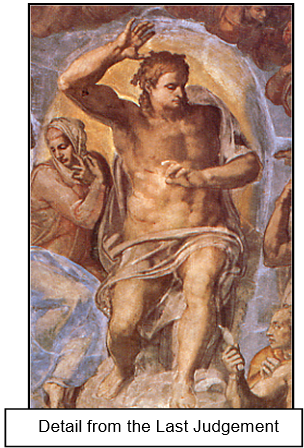 charged by Paul III with the task of painting the altar wall, previously decorated by Perugino. Here, in the space of six years, he completed his magnificent Last Judgement, a gigantic, powerful, and alarming scene which, by its vision of frightening retribution, surely shows Dante’s influence upon the artist. The largest fresco of the Renaissance, it shows Christ in the centre meting out justice (illustrated), and the damned writhing grotesquely as they descend into hell.

xxxxxIn was during this period, in 1536, that he first met Vittoria Colonna, a devout woman poetess. He deeply admired her simple faith and during their spiritual friendship they exchanged many letters and poems. She died in 1547.

xxxxxMichelangelo was also a talented architect. As early as 1519 he drew up plans for the facade of the church of San Lorenzo in Florence, and he also designed the elegant entrance hall for the adjoining Laurentian Library. At one stage, too, during the war against the Medici, beginning in 1527, he supervised the city’s fortifications. In Rome, his skill as an architect was not employed until later in life. In 1538 he completely redesigned the Campidoglio, the civic centre, but it was at St. Peter’s Basilica, where he was appointed chief architect in 1546, that he made his greatest contribution to the city. 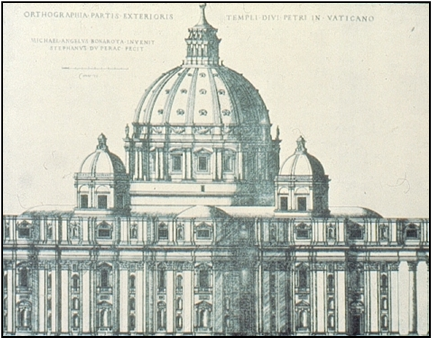 major architects who played a prominent part in the construction of the new St. Peter’s Basilica were the Italians Donato Bramante, Sanzio Raphael, and Carlo Maderno. As we have seen, it was in 1506 (H7) that Bramante, appointed by Pope Julius II, began work on the rebuilding of the Basilica, the famous church within the Vatican City, built over the tomb of Saint Peter. He envisaged an impressive square building in the shape of an equally-armed Greek cross, surmounted with a central dome and surrounded with bell towers and domes at each corner. He died in 1514, however, before the site was even cleared, and his successor, Raphael, put in charge of the work by Pope Leo X, changed the ground plan into the shape of a Latin cross with three aisles separated by pillars. But he died in 1520, and his plans never left the drawing board.

xxxxxAs noted above, Michelangelo was made chief 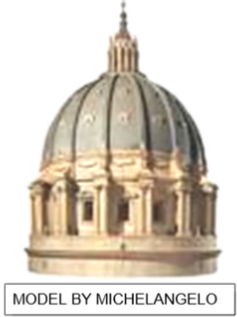 architect in 1546. Appointed by Pope Paul III, he took up the appointment with a great deal of reluctance but, in fact, his contribution - though not known in every detail - proved highly significant. Under his guidance the building at last began to take shape (see illustration above). Having studied the various options he recognized the value of Bramante’s original design and decided to adopt its basic features. By his death in 1564 construction was well under way. The ribbed dome had been given greater height and made ovoid in shape, and the building at the chancel end of the church had begun to take on its present-day appearance. The dome was completed in 1590 and the two-stage lantern installed by the Italian architect Domenico Fontana the following year. Early in the 17th century, however, Pope Paul V - regarding the Latin cross as the true symbol of Christianity - reverted to this shape in the overall design. Accordingly, his architect, Carlo Maderno demolished what remained of the old church and extended the nave by the addition of three bays, completed in 1612. Then a few years later he built the basilica’s facade, made up of giant Corinthian columns and surmounted by statues of Christ, St. John the Baptist, and the Apostles. The basilica was consecrated by Pope Urban VIII in 1626.

xxxxxAs we shall see (1633 C1), it was the Italian artist Lorenzo Bernini who designed and built the immense and imposing piazza in front of the basilica. Completed in 1667, its vast oval shape is elegantly contained by two gigantic arcades of Tuscan columns, sweeping in a semi-circle on either side of the piazza. And it was this great Baroque architect who contributed so much to the art treasures within the basilica itself. His masterpieces included the elaborate, gigantic canopy (the baldachin) installed above the high altar and completed by 1633; the imposing tomb for Urban VII; and the Chair of St. Peter (the Cathedra Petri), a huge bronze throne in the apse, raised on high by four massive statues and finally finished in 1666.

xxxxxIncidentally, towards the end of the 20th century, both of Michelangelo’s works in the Sistine Chapel were cleaned and restored. The removal of centuries’ of dirt, smoke and varnish has virtually revealed their original colours. But this “clean-up operation” was not the first to be carried out in the Sistine Chapel. In Michelangelo’s Last Judgment, completed in 1541, all the figures were in the nude, but a decade later draperies were strategically inserted by an artist dubbed “the breeches maker”!

xxxxxMichelangelo’s immense talent as an artist - 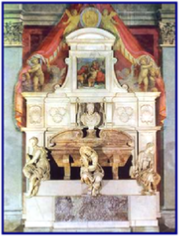 be it as a painter, sculptor or architect - dominated the High Renaissance period. He is remembered, too, for his exquisite collection of drawings and, in the literary field, for his contribution to poetry, notably by his sonnets. A man of exceptional skill and remarkable industry, he died in Rome in 1564, but, so the story goes, his body was smuggled out of the city in a packing-case and taken to Florence, his childhood home and the city he had served so well. Here he was given a civic funeral and laid to rest in the church of Santa Croce. The art historian Vasari designed his imposing tomb (illustrated), the three statutes on the monument representing the skills in which he so excelled - sculpture, painting and architecture.

THE CEILING OF THE SISTINE CHAPEL - containing 343 figures.

xxxxxAs we have seen (1504 H7), Michelangelo worked for the Medici in Florence and then settled in Rome, where he executed his exquisite Pietà. He returned to Florence in 1501 and then undertook his fine marble figure of the biblical David. In 1505 he was summoned to Rome to work on the magnificent tomb of Pope Julius II, but three years later he began his breathtaking work on the ceiling of the Sistine Chapel, providing a vast panorama of the Book of Genesis, not finished until 1512. After completing the Julian tomb and producing his set of nude figures depicting Day and Night, Morning and Evening, he returned to the Sistine Chapel and spent six years on his Last Judgement, a gigantic, alarming work which clearly showed the influence of Dante. As an architect he designed buildings in Florence and Rome, and played a major part in the planning of the dome for St. Peter's Basilica. A man of immense talent, Michelangelo dominated the High Renaissance as a painter, sculptor and architect. 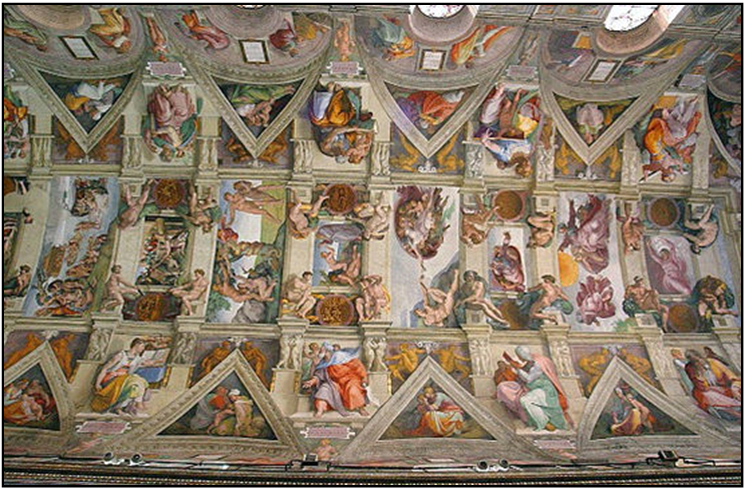 xxxxxA Venetian artist who was 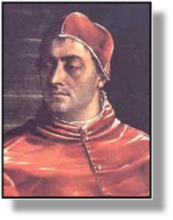 greatly encouraged and assisted by Michelangelo was Sebastiano del Piombo (c1485-1547). He came to Rome in 1511, where his contact with the great master brought a marked improvement in the quality of his work. To this period belongs his excellent The Raising of Lazarus (now in the National Gallery, London), and his Flagellation and Pietà. He produced some fine portraits during his career, including one of Pope Clement VII (illustrated), and it was this pope who, in 1531, appointed him keeper of the papal seal. This seal was made of lead and called piombino, hence Sebastiano’s nickname.

xxxxxA Florentine painter of this period who 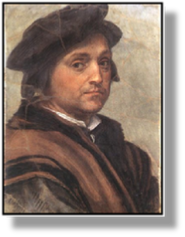 deserves mention is Andrea del Sarto (1486-1530), so named because his father was a tailor (sarto). A painstaking artist of the High Renaissance, he came to prominence in 1510 after completing five frescoes in the church of a religious brotherhood known as the Servites. Acclaimed for the quality of their line and 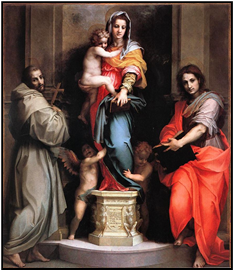 rich colour, and for the subtle use of light and shade (known as sfumato), he was soon in much demand. His reputation was further enhanced by his series of grey monochrome frescoes on the life of John the Baptist in the Chiostro dello Scalzo, but his masterpiece is generally considered to be his Madonna del Sacco, painted in the cloister of the Servite church in 1525. Among other religious works well worthy of note are the Madonna of the Harpies, now in the Uffizi Gallery, Florence (illustrated here), and the Last Supper, a fresco in the convent of San Salvi near Florence, painted three years before his death. The writer, architect and painter Giorgio Vasari was one of his pupils.

xxxxxIncidentally, “harpies” refers to the monster-like figures adorning the pedestal.