xxxxxThe Russian chemist Dmitri Mendeleev is famous above all for his periodic table of chemical elements, compiled in 1869 and improved two years later. Others had classified these elements - like the English chemist John Newlands and the German chemist Lothar Meyer - but Mendeleev was the first to put the then-known 63 elements in order of their atomic number and organise them into “groups” possessing similar properties. This enabled him to predict the properties of elements yet unknown and leave gaps in the table for their insertion. When new elements were discovered in accordance with his predictions, his periodic table put chemistry on a more rational basis, and his international fame was assured. As professor of chemistry at St. Petersburg university he gained a reputation as a brilliant lecturer, and his textbook The Principles of Chemistry went through many editions and was translated into several languages. Apart from success in other areas of chemical research, he also took an active part in industry, advising on the setting up of oilfields and oil refineries, and assisting in the production of soda and agricultural fertilizers. He spent his last years in charge of his country’s Bureau of Weights and Measurements. For his services to science he was awarded many honours and awards, including the Copley Medal of the Royal Society of London. 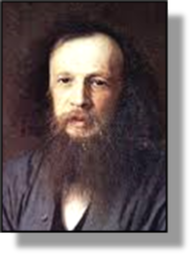 xxxxxIt was in March 1869 that the Russian chemist Dmitri Mendeleev compiled the first version of the periodic table of elements, in which the then-known 63 elements were arranged in order of their atomic number and organised into “groups” possessing similar properties. Then, from an improved version of this table, produced in 1871, he predicted the properties of elements yet unknown, and left gaps for their insertion. Three of these elements - gallium (1875), scandium (1879) and germanium (1886) - were discovered in his life time. This confirmed the accuracy of his research, brought him universal fame, and assured him a place of distinction in the history of science.

xxxxxMendeleev was born in Tobolsk (now Tyumen Oblast), Siberia, and after attending the local school, was trained as a teacher at the Pedagogic Institute in St. Petersburg. On completion of the course he was diagnosed with tuberculosis and, as a result, spent the next two years as a science teacher at Simferopol in the milder climate of the Crimea. Restored to good health, he returned to St. Petersburg in 1857 and, after taking an advanced degree in chemistry, went to Heidelberg in 1859 where he worked on the capillarity of liquids and the development of the spectroscope - the subject of his first book, published in 1861. Itxwas while in Heidelberg that he worked with the German chemist Robert Bunsen, and attended a lecture by the Italian chemist Stanislao Cannizzaro (1826-1910). His views on molecular and a 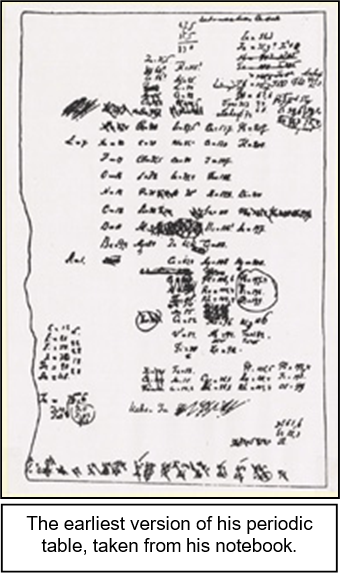 tomic weights were to have a marked influence when Mendeleev came to work on his concept of the periodic table.

xxxxxHe returned in 1861 and after three years writing on scientific matters, he was appointed Professor of Chemistry at the Technical Institute in St. Petersburg and then succeeded to the chair at the University itself in 1866. Such was the breadth of his knowledge and the brilliance of his teaching, that by 1871 he had made St. Petersburg an internationally recognised centre in this branch of science. And it was there that he came up with his version of the periodic table of elements. Others had produced a classification of elements around this time, such as the English chemist John Newlands (1837-1898) in 1863 and the German chemist Lothar Meyer (1830-1895) in 1869, but it was Mendeleev who arranged all known elements in order of increasing atomic weight (the periodic law), and, by providing a table that summarized the major properties of the elements, made it possible to predict the properties of elements not yet known. As such his periodic table was to prove a major break-through in the development of chemistry on a rational basis. And it was during this time that he produced his own two-volume textbook, The Principles of Chemistry, a work which proved extremely popular, went through many editions, and was translated into several languages.

xxxxxBut Mendeleev was a practical, active man, and his achievements were not confined to theoretical chemistry in the laboratory and lecture hall. In 1867 he was made responsible for the Russian pavilion at the Paris Exposition - a considerable undertaking - and he made improvements in a number of Russian industries, including the production of soda, agricultural fertilizers and petroleum. He was sent to the United States in the 1880s to study the production of petroleum and, on his return, advised on the establishment of oil fields and the building of Russia’s first oil refinery. He had a particular interest in aeronautics and was convinced of the feasibility of heavier-than-air flight. And such was his dedication to science that in 1887 he took a hazardous solo flight in a balloon to observe the eclipse of the sun.

xxxxxFurthermore, outside of his scientific interests, Mendeleev was also active in politics, so much so that his progressive views and his support of a student rebellion in 1890 led to his retirement from St. Petersburg University in 1890. He never held another academic appointment, but three years later he was put in charge of the government’s Bureau of Weights and Measures, a post he filled with distinction until his death in 1907. In his later years honours were heaped upon him from universities and scientific institutions around the world, and in 1905 he was awarded the Copley Medal, the highest award of the Royal Society of London. He was one of the founder members of the Russian Chemical Society in 1869 but, because of his divorce in 1882, and the controversy that surrounded it, he was never admitted to the Russian Academy. Just a few months before his death he was nominated for the Nobel Prize in Chemistry, but failed to be elected by one vote.

xxxxxIncidentally, since Mendeleev’s time, over 40 more chemical elements have been added to the table. The first one discovered in 1955 (element 101) was named “mendelevium” after him, as was a crater on the moon. ……

xxxxx…… When working at the Bureau of Weights and Measures he was tasked with the job of providing a new government standard for the popular Russian drink vodka. He found the perfect alcoholic content was 38%, but the government decided to round it up to 40%. Mendeleev is also credited with introducing the metric system into the Russian Empire. ……

xxxxx…… Through his work, Mendeleev was a close friend of the chemist-cum-music composer Aleksandr Borodin.

xxxxxAnother scientist at this time who won a name for himself both as a chemist and physicist was the Englishman William Crookes (1832-1919). As a chemist, he is remembered above all for his discovery of the metallic element thallium in 1861, followed by his detailed research into this metal and its properties. He also gained renown for his work in vacuum physics. While attempting to weigh thallium he used a variety of superior vacuum tubes - “Crookes tubes” - and discovered the basic properties of the cathode ray. This proved a significant step towards an early version of the cathode ray tube (a modification of a Crooke tube), and the eventual discovery of the electron by the English physicist Joseph John Thomson in 1897. Crooks also invented the radiometer and the spinthariscope, a particle detector, and his weekly publication Chemical News analysed a number of subjects, including the manufacture of sugar beet, the importance of phenol as an antiseptic, the treatment of sewage, and the manufacture and use of artificial fertilisers. He was knighted in 1897. 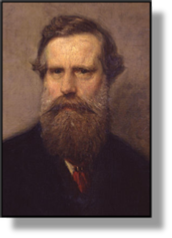 xxxxxAnother scientist at this time who won a name for himself both as a chemist and physicist was the Englishman William Crookes (1832-1919). As a chemist, he is remembered above all for his discovery of the metallic element thallium in 1861 - a find which won him election to the Royal Academy two years later - and for the detailed research into this metal and its properties that he carried out over the next eight years.

xxxxxHe was born in London and, after studying at the Royal College of Chemistry, set up his own research laboratory. It was here, in 1875, that he invented the radiometer, a device providing rotary motion which, driven by natural or artificial light, measured the intensity of electromagnetic radiation. And it was during the 1870s that, while attempting to determine the weight of thallium in an evacuated chamber, he extended his research into the conduction of electricity in gases, and produced his most important contribution to physics. Using a 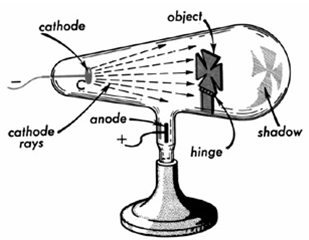 variety of superior vacuum tubes - “Crookes tubes” - he discovered the basic properties of the cathode ray, a significant step towards the development of the cathode ray tube (the earliest version of which was a modification of a Crookes tube here illustrated), and the eventual discovery of the electron by the English physicist Joseph John Thomson in 1897. Later he invented the spinthariscope (from the Greek word for “spark “), a device for studying alpha particles, and this enabled him to investigate the phenomenon of radioactivity at the turn of the century. 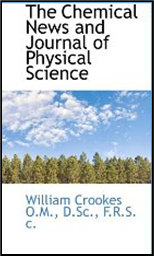 xxxxxA major contribution to scientific advance was provided by his weekly Chemical News, which he founded in 1859 and edited until 1906. This publication analysed a wide variety of subjects, including the production of sugar beet, the origin of diamonds in South Africa, the dyeing and printing of textiles, the treatment of sewage, the importance of phenol as an antiseptic, and the manufacture and use of artificial fertilizers. It proved so successful that in 1864 he was appointed editor of the Quarterly Journal of Science. He also published papers on spiritualism, a subject which he studied in depth over a number of years. For his valuable services to science, Crookes was knighted in 1897 and received the Order of Merit in 1910.