xxxxxToday the Ottoman Emperor Abdul Hamid II, who reigned from 1876-1909, is chiefly remembered for the Armenian Massacres, the brutal repression of a Christian people during his campaign of ethnic cleansing from 1894 to 1896. Seeing the Armenians within his empire as a danger to the Islamic character of the state, and to the internal security of the Ottoman Empire, he embarked on a systematic destruction of a defenceless minority. Using his army and mobs of Kurdish tribesmen, thousands were slaughtered, forcibly converted to Islam, or forced to flee the country. Many women and children were sold into slavery. It is estimated that over a period of three years 80,000 to 300,000 were killed and 2,500 villages totally destroyed. Worse was to follow. During the First World War the government of the Young Turks set out to exterminate this Christian minority. The men were killed in cold blood, and the women and children subjected to atrocious cruelty. Those who survived were then deported, force-marched to concentration camps in the deserts of Syria and Mesopotamia. It is estimated that by the end of the war 1.5 million had perished and hundreds of thousands had been forced into exile. It is hardly surprising that one of the war aims of the allies was the expulsion from Europe of the Ottoman Empire, an empire which had proved “so radically alien to Western Civilization”.

Map (Armenia): from kurdisharmenian.blogspot.com  Abdul Hamid: “The Butcher”, from a contemporary French political cartoon, artist unknown. Massacre: a sketch by an unknown eyewitness, contained in Turkey and the Armenian Atrocities by the Rev. Edwin Munsell Bliss (1848-1919), published Philadelphia 1896 – Library of Congress, Washington.

xxxxxSultanxAbdul Hamid II, the Ottoman Emperor who monopolised power and ruthlessly crushed any opposition to his reign from 1876 to 1909, is particularly remembered today for the Armenian Massacres, the brutal repression of a Christian people during a campaign of ethnic cleansing from 1894 to 1896. It is estimated that between 80,000 and 300,000 were killed, and over 50,000 children were made orphans. And in addition to the destruction of some 2,500 villages, more than 600 churches and monasteries were desecrated across the empire. 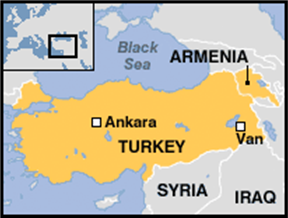 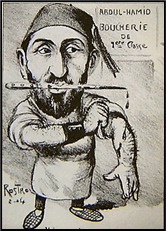 xxxxxBy the late 1880s some 2.5 million Christian Armenians were living within the Ottoman Empire. In the East a movement amongst them demanding equal rights and some form of territorial autonomy was followed by civic unrest at Marsovan in 1892 and at Tokat the following year, towns in the central Black Sea region of Anatolia. This alarmed Abdul Hamid. He perceived this as a direct threat to the Islamic character of the state, and the internal security of the Ottoman Empire, already fighting a desperate battle for survival. When, in 1894, an Armenian protest against heavy taxes and constant persecution by the local Kurds was reported in the region of Sasun - in the Armenian Highland of south-east Anatolia - he decided to pursue a policy of terror against “the hostilities of the Christian world”. Troops were despatched, and local Kurdish bandits were armed and told to “deal with the Armenians as they wished.” Within a few days the area had been plundered and the majority of its inhabitants murdered. 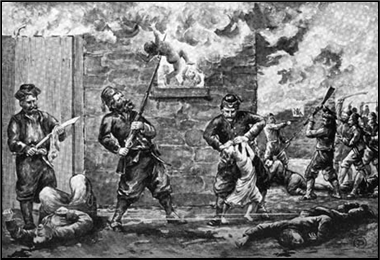 xxxxxThere followed a deliberate and systematic destruction of a defenceless minority in towns and villages across the empire. Thousands of Armenians fled the country - mostly to Russia - thousands were slaughtered in cold blood, and thousands were forcibly converted to Islam. Many, rendered homeless, died during the bitterly cold winter of 1895-96, and large numbers of women and children were sold into slavery. A protest rally, held in Constantinople in October 1895, was ruthlessly suppressed, and in December of that year 3,000 Armenians who had taken refuge in their cathedral at Urfa were burnt alive when the building was deliberately set alight. In April 1896, in a desperate attempt to attract international support, a group of Armenians seized the Ottoman Bank in Constantinople. By way of reprisal over a period of three days Ottoman troops, assisted by mobs of Muslims and Kurdish tribesmen, attacked the local Armenian community. Some 10,000 were murdered, 6,000 were imprisoned, and 20,000 were forcibly driven from the city.

xxxxxNews of the atrocities was quickly conveyed around the world and caused moral outrage in Europe and the United States. Abdul Hamid was vilified - dubbed the “Red Sultan” or the ”Butcher” (as illustrated above) - assistance was given by way of money to the Red Cross, and after three strongly worded protests from a combination of European nations, the wave of massacres subsided - though by that time they had virtually achieved their aim. 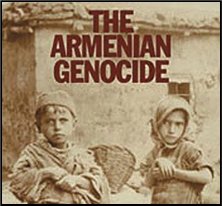 xxxxxBut, unbelievable as it seems, worse was to come. The rule of the Young Turks which followed the fall of Abdul Hamid II in 1909 did not bring the promise of a liberal, constitutional government. Far from it. The country was very soon under a ruthless dictatorship, and one which aimed to conduct a Holy War against the enemies of Islam. Following the outbreak of the First World War in 1914, on the pretext that the Armenians posed a danger to the state, it embarked on a plan to exterminate this Christian minority. The men were systematically shot or stabbed to death, and the women and children subjected to an appalling catalogue of torture, rape and killing, including roasting alive and crucifixion. Those who survived were then deported, many dying (and planned to die) on the long forced-marches to concentration camps in the deserts of Syria and Mesopotamia. It is estimated that some 600,000 died of starvation or were killed on route.

xxxxxDuring the war Turkey’s enemies, Britain and France, were in no position to take action, and Germany and Austria-Hungary were more concerned with winning the war than interfering in the internal affairs of their Turkish ally. By the end of the conflict more than 1.5 million had perished, and hundreds of thousands had been forced into exile. Only then was a certain war aim of the allies achieved: “The expulsion from Europe of the Ottoman Empire, which has proved so radically alien to Western Civilization”.

xxxxxIncidentally, the atrocities committed by Abdul Hamid II in the years 1894 to 1896 are often called the ”Hamidian Massacres” to differentiate them from the “Armenian Massacres” carried out during the First World War. ……

xxxxx…… Later, as we shall see, Abdul Hamid II was involved in the Greco-Turkish War, a brief conflict that followed an ill-advised Greek invasion of the island of Crete and the Turkish province of Macedonia in 1897.