Despite the violent response to the Stamp Act in 1765, the British government had to reduce its financial burden. In 1767, avoiding an “internal tax”, it introduced “external duties” on a wide range of essential imports, such as paper, paint, glass and tea. The revenue raised, it explained, would pay for the officers of the crown working in the colonies. But the colonists would have none of it, and violent opposition flared up again. Eventually this led to an incident in Boston in 1770 in which British troops opened fire on a crowd and killed five civilians. To avoid a wider rebellion, the British government decided to repeal all these import duties except the one on tea. But all was not over. As we shall see, the port of Boston, which had already played a leading part in the opposition to taxation, was to take an even bigger role in 1773 with the famous Boston Tea Party, an event which was to be more than just a storm in a teacup.

xxxxxDespite the violent response to the imposition of the Stamp Act in 1765, the British government was committed and determined to find a means of reducing the country's financial burden. In 1767 Charles Townshend became Chancellor of the Exchequer and, assiduously avoiding an “internal tax” on the American colonies, imposed “external duties” on a wide range of essential imports, including lead, paint, paper, glass and tea. The revenue from such duties, it was made plain, was to pay for the officers of the crown who were working in the colonies. But neither this “reasonable” explanation, nor the subtle difference in the labelling of the tax, cut any ice with the colonists. Violent opposition, - having been silenced by the repeal of the Stamp Act a year earlier - flared up again amid widespread resistance. 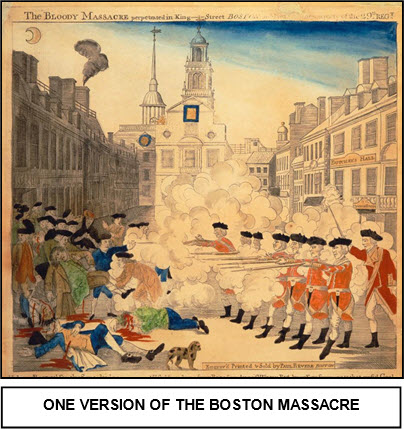 xxxxxAt Boston a public meeting drew up a non-importation agreement to side step the new taxes, and in Massachusetts in 1768 the assembly was dissolved for refusing to take part in the collection of the taxes. Then in March 1770, the situation took an ugly turn. A brawl broke out at Boston and British troops opened fire on a crowd of civilian hecklers, killing five. This so-called “massacre” threatened to bring about an armed revolt. Parliament was obliged to back down once again. The following month it repealed the duties on all the commodities except that on tea, retained by the Tea Act simply so that the East India Company could off load accumulated stocks of cheap tea. By such action it hoped to defuse the situation once again, but it was not to be. (The engraving here was produced by Paul Revere in 1770. It is generally agreed that it is not an accurate picture of what actually took place).

xxxxxThe city and port of Boston, it should be noted, had taken a leading part in the opposition to the mother country over taxation. During the disorders following the passing of the Stamp Act, for example, the governor's house was attacked and burnt down. Opposition there had been vigorously led by the

American politician Samuel Adams. There was then the “massacre” - an incident which is re-enacted in the city each year - and in 1772 the Boston assembly went so far as to threaten to throw off British control if the rights of the colonies were threatened further. Meanwhile, the politician John Adams (1735-1826), Samuel Adam's cousin and a future president of the United States, had also made his opinion crystal clear in an article published in the Boston Gazette. His Dissertation On the Canon and Feudal Law, reprinted in London in 1768, had championed the individual rights of the New World against the collective authority of the Old. (It was John Adams, by the way, who, as a lawyer, defended the British officer in charge at the time of the “massacre” and got him acquitted!).

xxxxxBut, as we shall see, the city's greatest contribution to this mounting opposition towards the mother country was yet to come - the so-called Boston Tea Party of 1773. This was to prove much more than a storm in a tea cup.