xxxxxIn order to settle a border dispute between the states of Maryland and Pennsylvania in North America, two English astronomers-cum-surveyors, Charles Mason (1728-1786) and Jeremiah Dixon (1733-1779), were employed in 1763 to fix the boundary along an agreed line. Using stone markers, placed a mile apart and checked out for accuracy by a telescope and the movement of the stars, they completed the work in 1767. Later, in the American Civil War, the "Mason-Dixon" line came to be seen as the division between the so-called free states of the north and the slave states of the south, the Union and Confederate states. 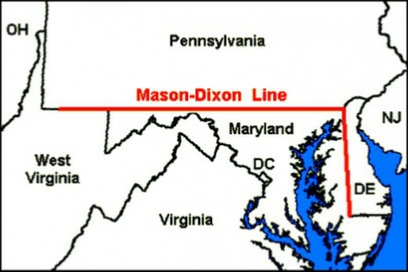 It was in 1763 that two English astronomers-cum-surveyors, Charles Mason (1728-1786) and Jeremiah Dixon (1733-1779), were called in to settle a boundary dispute between the North American states of Maryland and Pennsylvania. They worked out the starting point as being 15 miles due south of Philadelphia - in the middle of someone's house as it turned out! - and from here they surveyed to the west, following the line of latitude 39 degrees, 43 minutes and 17.6 seconds North. A path was cleared as they progressed, and limestone markers, brought especially from England, were placed at each mile point, the posts being lined up by the use of a telescope, and checked out for accuracy by measuring star movements. 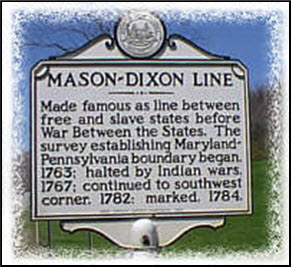 The work was held up for some six months during 1767, due to Indian resistance, and they were not able to complete the last 36 miles of the border. However, when they finished their survey in 1767, the official boundary stretched for some 244 miles. The line was resurveyed in 1849 and again in 1902 and was found to be remarkably accurate. Today, many of the original markers remain, but some have been put to better use as doorsteps! When erected, each one bore a P on one side and an M on the other, and every fifth one was engraved with the appropriate coat of arms. The total cost of the project was somewhere in the region of $75,000. Work on surveying the remaining stretch of the boundary was begun in 1782 and completed two years later. 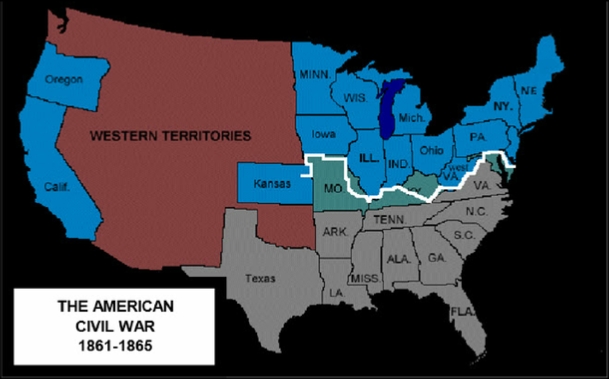 In the 19th century, this line - together with the Ohio River - came to be regarded as marking the division between the so-called free states of the north, and the slave states of the south - the Union and Confederate states in the American Civil War (shown white on the map). Today it still serves traditionally as the political and social line dividing the North from the South.

xxxxxLittle is known about Mason and Dixon, but they had worked together before. In 1760 they had been appointed by the Royal Astronomical Society to go to Sumatra in order to observe the transit of Venus. It appears that, for some reason or other, they got no further than South Africa, and returned home from there. 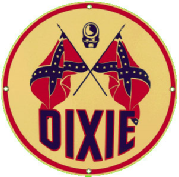 Incidentally, it is possible that the term "Dixie", the popular name for the American South, originated from the name "Dixon". It is more likely, however, that it derives from the French word for ten, because a few years before the outbreak of the American Civil War, the Citizens' Bank of Louisiana issued a $10 bill which had, on its reverse side, the word Dix. But there are other contenders! There might well have been a kind slave owner named "Dixie", because the black slaves used to sing a song about the good life at "Dixie's". Lastly, the name may have come from a song written in 1859 by the American composer Daniel Decatur Emmett (1815-1904). It was called "Dixie" and proved so popular as a marching song during the Civil War that it came to be regarded as the unofficial national anthem of the Confederacy. But where, one might ask, did Emmett get the title from!