xxxxxThe English dramatist and poet Christopher Marlowe died at 29, but he wrote some outstanding plays, including the Jew of Malta, Edward II, and The Tragic History of Doctor Faustus, all produced after his death. In them he showed his mastery of blank verse, and proved its effectiveness as a dramatic medium. He established his reputation with his powerful Tamburlaine the Great, and is generally thought to have written his masterpiece Doctor Faustus the following year in 1588 - a work which had a particular influence on the German poets Lessing and Goethe. His plays Dido, Queen of Carthage and Edward II were restrained in tone, but his dramas in general were highly dramatic and full of passion and impact, as in his Massacre of Paris. Emphasis was upon tragedy and the creation of a powerful central character, and this had a marked influence upon Elizabethan and Jacobean drama. As a poet he is best remembered for his The Passionate Shepherd. A man of violence and questionable morals, he was stabbed to death during a brawl at a tavern in Deptford, London. 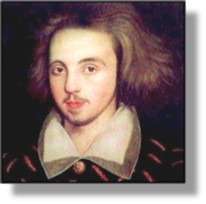 xxxxxIn a life of less than 30 years the English poet and dramatist Christopher Marlowe produced a number of outstanding plays, including Tamburlaine the Great, the Jew of Malta, Edward II, and The Tragic History of Doctor Faustus of 1588. All of these were written within the space of six years and only one, Tamburlaine, was produced within his lifetime. In these and other works he showed his mastery of blank verse, and its effective use as a readily adaptable form of expression for stage production. This form became the metric norm for the drama of his day.

xxxxxHe was born in Canterbury, the son of a shoemaker, and attended King's School before studying at Cambridge University. He led something of a dissolute, albeit adventurous life. A man of violence and questionable morals, on one occasion he was charged and imprisoned for murder; on another he was arrested for counterfeiting; and on another he was accused of being a heretic. A friend of the seaman adventurer Sir Walter Raleigh, he was murdered at the age of 29 during a brawl in Eleanor Bull's tavern in Deptford. It would appear that he was fatally stabbed during a dispute over the cost of a bill. It was a tragic end to a man of such talent. 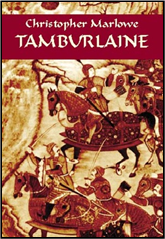 xxxxxBy 1587 he was living in London, where a company of actors known as the Lord Admiral's Men produced his plays. In that year his reputation was firmly established with the production of the melodrama Tamburlaine the Great, a play based loosely on the great Mongol leader who conquered central Asia and India at the end of the fourteenth century (Tamerlane). Such a commanding character, obsessed with power, gave plenty of scope not only for spectacular scenes of bloody conquest, but also for blank verse of magnificent passion and impact. And his next play, the Jew of Malta, followed the same pattern, with a vigorous central character who dominated the stage and provided plenty of opportunity for grand rhetoric and the "mighty line", as Ben Jonson put it. 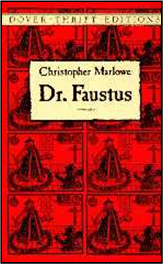 xxxxxBut his work is not all blood and guts and heroic speeches. His play Dido, Queen of Carthage, and his narrative poem Hero and Leander, - both unfinished at his death - are notable for the gentility of their tone, and the sweetness and harmony of their verse, whilst Edward II is a subtle study of weakness, not a tribute to overbearing greatness. And there can be conflicting moods within individual plays. The Jew of Malta is not without its interludes of comic farce, whilst in Dr. Faustus, his masterpiece, slapstick goes alongside moments of high drama. And it is perhaps in the character study of Faust - the best developed of his protagonists - that we see Marlowe himself. So emotionally charged is this work, and so timeless its theme, that it has survived down the ages and influenced many writers, particularly the German poets Lessing and Goethe. 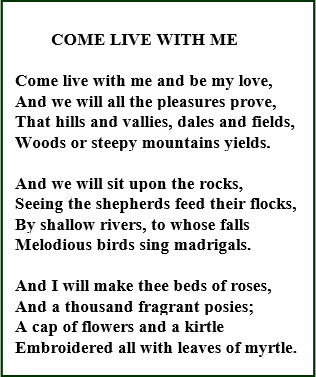 xxxxxHis Massacre of Paris, published around 1593, provided dramatic incidents from the Religious Wars still raging in France, and included reference to the St. Bartholomew Day's Massacre. As a poet he is best remembered for his The Passionate Shepherd, a work which contains the lyric Come live with me and be my love (shown here). Earlier in his short career he found the time to translate works by the ancient Roman poets Ovid and Lucan.

xxxxxMarlowe is considered the first great English dramatist, second only to William Shakespeare. His brilliant use of blank verse as a dramatic medium, his emphasis upon tragedy, and the creation of a powerful central character had a marked influence upon both Elizabethan and Jacobean drama.

xxxxxIncidentally, an air of mystery surrounds the life of Marlowe. Whilst he was at Cambridge University, there is some evidence to suggest that he was working for the Queen's secret service. This has given rise to the notion that his murder was politically motivated, but there is no evidence to support that theory. Another idea, banded about later, was that his murder was a fake and that he was actually secreted away to Italy, where he wrote plays on behalf of William Shakespeare! Again, there is no hard evidence to support such a suggestion. …… 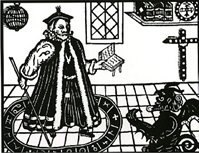 xxxxx…… Doctor Faustus, an old German legend about a man who sold his soul to the Devil, was named after a German conjuror and fortune teller of the sixteenth century. At the end of the play Faustus demands to see the beautiful Helen of Troy and this gives rise to the famous line “Was this the face that launch’d a thousand ships, And burnt the topless towers of Ilium? 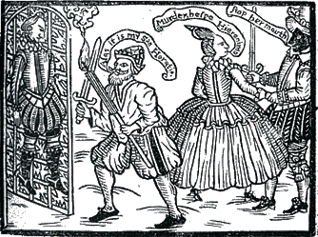 xxxxxA close friend of Marlowe, with whom he shared lodgings for a time, was the English dramatist Thomas Kyd (c1557-1594). He was implicated with Marlowe on charges of heresy and, imprisoned in 1593, was later tortured on suspicion of treason. He died in poverty soon after his release the following year. He was born in London and educated at the Merchant Taylor's School at the same time as the poet Edmund Spenser. He wrote a number of plays - some of them produced by the Lord Admiral's Men - but his fame rests almost entirely upon his Spanish Tragedy, the first revenge tragedy in English literature. (A woodcut from the play is illustrated here.)

xxxxxProbably produced about 1590, this tragedy proved immensely popular and was played no less than sixteen times in 1592. Leaning heavily upon the work of the Roman writer Seneca, it brought shocking acts of bloodshed and horror to the stage and the audience loved it, particularly the inevitable carnage in the final scene. This theme of revenge and the method of portrayal were employed to like effect by Shakespeare in his Titus Andronicus, whilst traces of Hieronimo, the central character in the Spanish Tragedy, plus the plot itself, can clearly be detected in Hamlet. Indeed, it is possible that Kyd actually wrote an earlier version of Hamlet, now lost and referred to by scholars as the Ur-Hamlet.

xxxxxThe dramatist Thomas Kyd (c1557-1594) was a close friend of Marlowe. His fame rests with his Spanish Tragedy, the first revenge tragedy in English literature. Produced around 1590, its scenes of horror and bloodshed, based upon the work of the Roman writer Seneca, proved immensely popular. This theme of revenge was employed by Shakespeare in his Titus Andronicus, and his Hamlet was not dissimilar to the Spanish Tragedy in its plot and central character. In 1593 he was imprisoned on charges of heresy and treason, and died in poverty after his release the following year.