THE MANCHU (QING or CH’ING) DYNASTY

xxxxxThe Ming Dynasty, founded in 1368 (E3), reached the height of its power under emperor Yung Lo around 1414 (H5). In 1499, however, the Western Mongols defeated a Ming force near Peking, and in 1521 a reign of terror brought the empire near to collapse. By 1550 (E6) the empire was under constant attack. The end came following the rise of the Qing dynasty in Manchu, founded by its leader Nurhachi (later Kundulun Khan). He took over parts of the Ming Empire and his son, Prince Dorgon advanced towards Peking in 1638. Amid the anarchy that followed a Ming commander invited the Manchu into the city to restore order. They entered and stayed. The Ming Dynasty was at an end by 1644, though resistance continued for some years. The Manchu Dynasty lasted until 1911 but it was many years in decline. As we shall see, its first great leader was K’ang-Hsi (1673 C2). 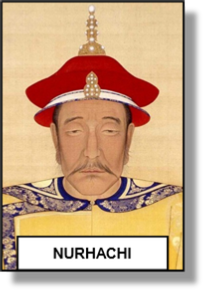 xxxxxThe Ming Dynasty or "Brilliant Dynasty" of China was founded in 1368 (E3) and reached the height of its power in the early years of the fifteenth century under its greatest emperor Yung Lo (1414 H5). By the end of his reign, however, Mongol attacks along China's northern borders had become more frequent, and in 1499, during the reign of Cheng-T'ung, the Western Mongols, known as the Oirats, administered a heavy defeat upon Ming forces near Peking. The emperor himself was captured and held a prisoner for a year. The Empire recovered somewhat over the next twenty years, but in 1521, with the coming to power of the incompetent Chia-ching, a reign of terror brought the country near to collapse. As we have seen, by 1550 (E6) Mongol tribesmen had begun to surge across the north-west frontier, whilst in the south-east sea raiders based in Japan were landing ashore and penetrating deep into the Yangtze Delta. 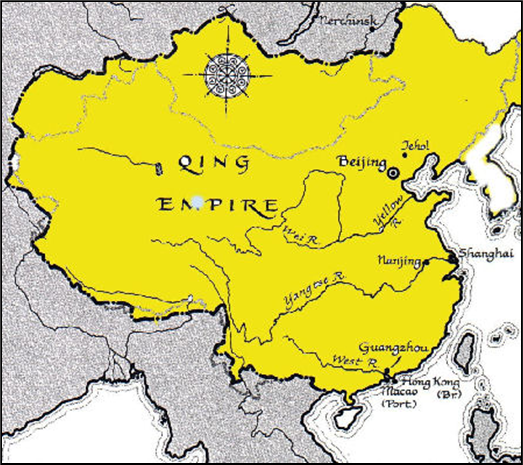 xxxxxYet again, the empire managed to survive and, under Chia-ching's more able successors, the land and sea invaders were repulsed and a period of stability was achieved. In the 1580s, however, a new and decisive threat emerged. An ambitious leader named Nurhachi (1559-1626) a native of one of the five Juchen tribes of the Manchu in eastern Manchuria, having triumphed over the other four tribes, began his advance into the central, Chinese-held areas of Manchuria. By now he had turned his tribal group into an efficient military state, based on what was termed the "banner system". By this system, he divided his warriors into large "companies", each sporting a distinctive banner, and these served not only as military detachments when required, but also as units for administration, taxation and conscription. Now leader of a well organised, fighting force, in 1616 Nurhachi took on the imperial title Kundulun Khan and proclaimed the creation of the Later Jin Dynasty (renamed the Qing Dynasty in 1644). Then,xhaving gained victories over Ming forces in 1619 and 1621, he took control of the whole of the north-eastern region of the Chinese Empire. He would have advanced further had he not been mortally wounded at the Battle of Ningyuan in 1626.

xxxxxHis successor on the battlefield, his son Prince Dorgon, did advance further. In 1627 the Manchu overran the Korean peninsula and began to cross the “Great Wall of China”, advancing close to Peking in 1629 and 1638. The Ming Empire, burdened with heavy taxation and struck by famine, now began to break up, and in April 1644, amid total anarchy, a peasant rebel named Li Tzu-ch'eng seized the capital. The then emperor, Ch'ung-chen, committed suicide, and a Ming commander invited the Manchu in to restore law and order. They accepted the invitation and then, hardly surprisingly, seized the throne for themselves. Dorgon established Peking as the capital and, adopting a large number of Chinese practices and customs, laid a firm basis for the new Qing Dynasty - sometimes known as the Manchu or Ch’ing Dynasty. 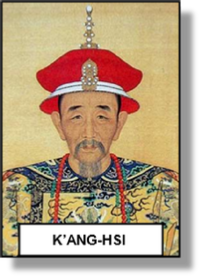 xxxxxMing loyalists held out in parts of the south for some forty years and those on the island of Taiwan until 1683, but the Qing dynasty had come to stay. It provided sound government for some 150 years, but it then went into a long period of decline and was eventually overthrown in 1911. During its long reign, the Chinese empire reached its greatest extent, including all of China, the four great dependencies of Manchuria, Mongolia, Sinkiang (Xinjiang) and Tibet, and a number of tributary states such as Nepal, Burma and Korea. As we shall see, the first of its great Emperors was K'ang-Hsi (1673 C2), who ruled for over sixty years (1661-1722).

xxxxxThe fall of the Ming dynasty marked the end of the great age of extremely fine Chinese porcelain, but Qing China was not without quality products. Over the next hundred years it was to export vast quantities of household porcelain (or china) to Europe, together with fine silk, cheap but good quality cotton goods, and large quantities of tea.