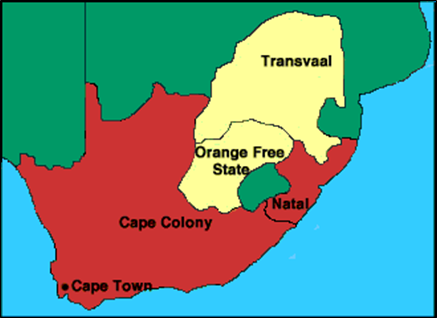 xxxxxAs we have seen, Transvaal - the area beyond the river Vaal - was occupied by the Boers of South Africa in the 1840s, towards the end of their Great Trek, and their right to this territory was recognised by the British at the Sand River Convention of 1852 (Va). However, over the next twenty years the state, known as the South African Republic, ran into serious financial difficulties, and following a border dispute between the Boers and the Zulus, the British decided to annex the area in 1877 (Vb). The Boers had asked for assistance in this dispute, but this high-handed action contravened the Convention of 1852 and aroused strong opposition, led by the dynamic leader Paul Kruger. He negotiated with the British, visiting Britain at one point in an attempt to regain Boer independence, but he failed in his mission. In December 1880 the Boers rose in revolt, declared a new Transvaal republic, and laid siege to isolated garrisons throughout the state. British troops were fired on at Potchefstroom, and a few days later a British convoy travelling to Pretoria was ambushed and destroyed at Bronkhorst Spruit (a small stream).

xxxxxThe conflict that followed in 1880 and ended in 1881, known as the First Anglo-Boer War, was short in duration and - by the standards of the day - was little more than a series of skirmishes, but the decisive and humiliating defeat of the British throughout the conflict was to have far reaching consequences. ThexBritish campaign was led by Major-General Sir George Colley (1835-1881), an experienced soldier and the newly appointed governor of Natal. Not prepared to wait for reinforcements, then on their way, he assembled a force of about 1,000 men, including a small naval detachment, and marched to relieve the garrisons in the Transvaal.

xxxxxOn route, this small army suffered heavy loses on two occasions. On reaching Laing’s Nek in January 1881, a ridge in the foothills of the Drakensberg Mountains, the force was ambushed. Boer riflemen, occupying the hills on either side of the ridge, brought withering fire down upon the British troops. A bombardment of the high ground on one of the flanks, and an assault upon the summit of Brownlow’s Kop, failed to dislodge the Boers, and the British had lost 84 men and over 100 wounded before clearing the ridge. Then early the next month Colley sent a company of infantry to make secure the Newcastle-Mount Prospect road - essential for the arrival of reinforcements - but at Schuinshoogte, overlooking the Ingogo River, it was surprised by a Boer force, mainly mounted. Once again the accurate and concentrated fire of the Boer riflemen took its toll. Only heavy rain brought the battle to an end and avoided a total defeat. During the hours of darkness the British, together with two pieces of artillery, managed to escape across the swollen river, but several men drowned in the process, bringing the total loss to 76. 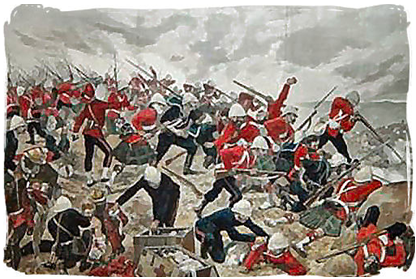 xxxxxThese humiliating defeats at the hands of a hastily assembled army of Boer farmers demoralised Colley’s men, but worse was to come. Having advanced close to the Transvaal border, Colley decided to occupy Majuba Hill, a commanding height ten miles south of Volksrust which overlooked a Boer base. After a strenuous night march, a force of some 650 men climbed and occupied the barren hill top on the 26th February. But, having gained this vantage point, little if anything was done to prepare defensive positions, and some stretches of the summit were left unguarded. At first light the Boers, encamped on low ground to the North-East, were alarmed to see that the British had captured the hill. They waited for an attack upon their camp but, when none came, they decided to go on the offensive. Taking cover in the high grass and thick scrub which covered the sides of the hill, a number of mounting parties - some 180 riflemen in all - began to climb the height at various points, whilst keen marksmen below picked off any red coats who appeared on the skyline. Having reached the summit, the Boer riflemen opened fire from a distance, sending volley after volley into the British ranks. Finally, with casualties mounting, the infantry broke off action and fled down the sides of the hill, many being shot by sharp shooters as they tried to escape. Those who remained on the summit made a last desperate stand, and it was at this point that Sir George Colley himself was shot dead. The British lost nearly 100 men, with 130 wounded and some 60 taken prisoner. The Boers suffered a handful of casualties.

xxxxxThexBritishxdefeat at Majuba Hill brought an end to the war. William Gladstone, returning as prime minister in June 1880, was a staunch opponent of colonialism. He favoured a settlement, and by the Convention of Pretoria in April 1881 the Transvaal regained its independence. Some reservations were made in the agreement, but at the London Convention of 1884 the liberal government modified the terms of the treaty. No mention was made of British suzerainty over the state, nor of Britain’s right to intervene to protect the rights of the native population. Paul Kruger became the new republic’s first president. 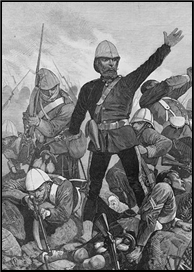 xxxxxFrom the military point of view the war was an unmitigated disaster for the British. First and foremost it highlighted the potential of long range, breach-loading firearms. Unlike the Zulus, the Boers avoided close quarter combat, keeping a distance from their enemy and relying on their stealth and accuracy as riflemen, be it on horseback or with the advantage of ground cover. In this respect the colourful uniforms of the different British regiments - notably the red coats - made sharp-shooting that much easier. Indeed, during the conflict, those troops wearing white helmets attempted to increase their survival rate by staining them with tea! And the quality of leadership was also questioned. Sir George Colley had served well under Sir Garnet Wolseley in the Gold Coast and later in India, but doubts were raised as to his qualities as a field commander. His tragic death while making a last stand on Majuba Hill (illustrated) made him a hero in the eyes of the public - a plaque where he fell is still in place to this day - but in the War Office he was criticised by some for rushing into battle without sufficient numbers, and showing a somewhat timid approach in the conduct of the battle itself. 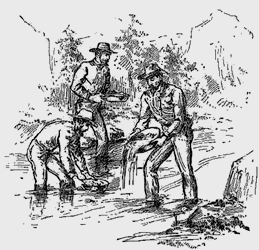 xxxxxBut the defeat at the hands of the Boers also invoked a great deal of anger amongst the British public. There was a call for revenge, and the stage for that was set in 1886 with the discovery of large deposits of gold in the Witwatersrand Basin near modern-day Johannesburg. This brought about a large influx of Uitlanders (foreigners or outsiders) into the Transvaal - mainly from Britain - in search of fame and fortune. By the mid-1890s it was estimated that there were 60,000 Uitlanders, double the number of white male Boers. Fearing that they might again lose their independence to the British, the Boers placed residential and franchise restrictions upon the newcomers, but this only served to exacerbate the situation. At Johannesburg, a settlement dominated by Uitlanders, there was talk of an insurrection. It was this situation, as we shall see, that brought about the famous Jameson Raid of 1895/1896, an attempt to seize the Transvaal - and its riches - for the British Empire. It failed, but the problems associated with the Uitlanders remained, and it was the failure to resolve these problems which was to bring about the Second Anglo-Boer War in 1899, a conflict which was much longer and bloodier than the first, and was to have serious long-term consequences for the future of South Africa and, indeed, the British Empire. 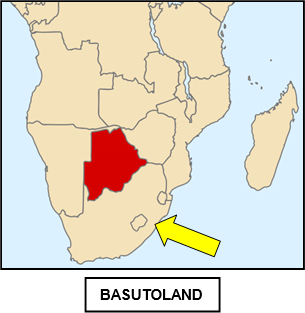 xxxxxIncidentally, it was in the 1880s that Bechuanaland (on map) a sparsely populated area adjoining the Transvaal, became a British protectorate, due in part to the efforts of the British imperialist Cecil Rhodes. The area was inhabited by the Tswana people from the 17th century, but became the home of the Bantu people in the early 19th century. In 1885 two chiefs of the Tswana people sought protection against constant attacks by the Boers. The government of the Cape Colony, concerned that the territory might fall into the hands of the Germans - then colonizing South West Africa (today’s Namibia) - agreed to the establishment of a protectorate. The country gained its independence in 1966 and was renamed Botswana. ……

xxxxx…… Likewise the smaller territory of Basutoland, an enclave within today’s Republic of South Africa,came under British protection at this time. The state (arrowed on the map) was founded by King Moshoeshoe I, the leader of the Basotho people, in 1827. In 1843, fearing attacks from the Boers, he received protection from the British, but in 1871, following his death, the territory was annexed by the Cape Colony. In 1880, however, the Basotho rose up against their masters and the kingdom became a British crown colony in 1886. Like Bechuanaland, it gained its independence in 1966, and it was then renamed Lesotho.

xxxxxIt was towards the end of their Great Trek northwards in the 1840s that the Boers in South Africa settled in the Transvaal, an area beyond the River Vaal. As we have seen, by the Sand River Convention of 1852 (Va) the British recognised their right to this territory, but in 1877 (Vb), following a series of disputes they had with the Zulus, the British decided to annex the territory. This brought about the First Anglo-Boer War. The British sent a force to the Transvaal but it was badly mauled in skirmishes at Laing’s Nek and Schuinshoogte, and then seriously defeated at the Battle of Majuba Hill in February 1881. The Boer riflemen climbed the height held by the British infantry and drove them from the summit. By the Pretoria Convention of 1881 and the London Convention of 1884 the Transvaal regained its independence. The defeats suffered by the British raised questions as to their military tactics and the quality of their leadership. Then in 1886 the discovery of large gold deposits near present-day Johannesburg brought a vast influx of Uitlanders (foreigners) into the Transvaal. These newcomers threatened to undermine the state, and, as we shall see, it was this situation which brought about the famous Jameson Raid of 1896, an attempt to seize the Transvaal - and its riches - for the British. It failed, but the Uitlanders remained a threat to the state, and it was this that eventually led to the out-break of the Second Anglo-Boer War in 1899, a more prolonged conflict than the first.