xxxxxAs we have seen, the American inventor Thomas Alva Edison was the first to produce motion pictures via his Kinetoscope, first shown in 1891. However, he then attempted to add sound to his peep-show machine, leaving others to take the next related step, the projection of these moving images onto a large screen for general viewing. The French brothers, Auguste and Louis Lumière achieved this in December 1895. With their combined camera and projector, the Cinématograph, they put on a film show in Paris attended by a paying audience. Because of the quality of their production - ten short films - the Lumière brothers are generally credited with opening the world’s first cinema, but others have claimed this distinction. Seven months earlier, for example, an American named Woodville Latham, assisted by his two sons, filmed a boxing match and, using a screen, showed it to a paying audience in New York, and the German brothers Max and Emil Skladanowsky showed a number of short films, just a few seconds long, at the Winter Garden in Berlin in November 1895. However, unlike the Cinématograph Lumière, neither of these inventions stood the test of time. The Skladanowsky Brothers went out of business in 1897 and Latham a year later.

xxxxxAs we have seen, the American inventor Thomas Alva Edison was the first - or certainly one of the first - to produce motion pictures. His Kinetoscope, a peep show which enabled one person at a time to view a rapid succession of individual images, was given its first public showing in 1891, and was in commercial use by 1894. But having achieved enormous success with this machine on both sides of the Atlantic, he then chose to turn his attention to the possibility of adding sound to sight. His Kinetoscope was extremely popular and selling well, and he therefore saw no reason to put his research into finding a means of projecting these moving images onto a screen. In his opinion this had little commercial value, and would only serve to “kill the goose that lays the golden egg”. 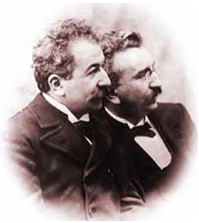 xxxxxBy the time Edison came to realise the potential of the movie screen, the sales of the Kinetoscope had plummeted, and other inventors had given birth to the age of the cinema. One of the first - if not the first - to produce a movie show for a paying audience were the Lumière Brothers, Auguste and Louis (illustrated). Having produced their own projector, their cinématographe, they projected moving pictures onto a screen in Paris in December 1895.

xxxxxThe Lumière Brothers were born in Besançon and, as young men, worked in their father’s photographic firm in Lyons. There they gained a great deal of hands-on experience about the photographic industry, and came up with a number of improvements to the developing process. It was in 1894, after seeing Edison’s Kinetoscope at work in Paris, that they decided to design a camera of their own which would be able to project motion pictures onto a screen for general viewing. By February 1895 they had produced a working model of their cinématograph, a combined camera and projector, and by the end of December they were ready to give their first public movie-screening. (Poster illustrated below). This was held in the Salon Indien of the Grand Café in the Place de l’Opéra, Paris, where some 35 people paid to see ten short clips, including a 50-second sequence showing workers leaving their father’s factory at Lyon, and The Sprinkler Sprinkled, depicting the amusing capers of a gardener using a watering hose. 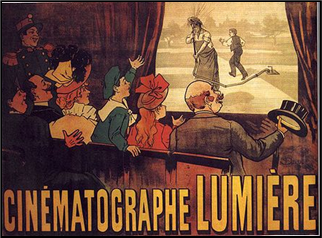 xxxxxThis public screening - the showing of a sequence of moving pictures which was no longer restricted to a peepshow for one - gave birth to a film industry overnight. The brothers began commercial production of their camera-cum-projector, and a host of other inventors and entrepreneurs got in on the act in order to meet the needs of the “big screen”. The age of the cinema had begun. It is generally accepted that the 28th December 1895 - the date of the Lumières’ commercial exhibition - marks the opening of the world’s first cinema. Their camera/projector proved up to its task and the 16 frames per second became the standard speed. Furthermore, the showing was certainly held in a “cinema” setting; and those attending were charged an entrance fee.

xxxxxHowever,xas was to be expected, claims were made of earlier showings. Prime among these was a four minute film of a staged boxing match, filmed on the roof of Madison Square Garden in May 1895, by Woodville Latham (1837-1911), a one-time professor of chemistry at West Virginia University, and his two sons Otway and Gray. The previous year they had produced a movie camera and projector with the assistance of Eugène Lauste (1857-1935), a former employee of Edison’s company, and William Dickson, then Edison’s chief engineer, who was working for them unofficially. At the end of May 1895 this four-minute motion picture was shown to a paying audience at a small store in Broadway, New York, more than seven months before the Cinématographe Lumière. However, the method of projection - simply a modified Kinetoscope - proved inadequate, and one magazine in particular, the Photographic Times, saw “considerable room for improvement”. Plagued with legal and technical problems their enterprise, the Lambda Company, went out of business in 1898. 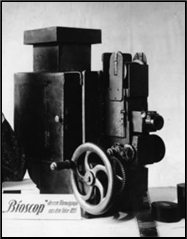 xxxxxAxmore valid challenge was that made by the German inventor Max Skladanowsky (1863-1939) and his brother Emil. In 1895 they invented the Bioskop, a projector based on the workings of a magic lantern, which used two loops of 54mm film - projected alternatively - and attained a speed of 16 frames per second (illustrated). They gave a demonstration in Pankow, Berlin, in July 1895 and, on the strength of that, were invited to put on a show at the Winter Garden, the music hall in Berlin. Beginning in November 1895, they gave continuous performances over a period of four weeks. Their programme consisted of a number of short films with musical accompaniment, and included an acrobatic display and a juggling act. None was longer than six seconds, but each was repeated several times. The projector used was much inferior to that employed by the Lumière Brothers the following month, as was the entertainment value itself, but nevertheless this could well be seen as the first “cinema” performance in Europe and, indeed, the world. However, following the opening of the Lumière production, their booking at the Folies Bergère was cancelled. They took their show on tour - Germany, Scandinavia and the Netherlands - and gave their last performance at Stettin in March 1897.

xxxxxIncidentally, although Woodville Latham’s projector was not particularly successful, he is remembered to day for the “Latham loop”. Invented in 1895 with the assistance of Dickson and Lauste, it significantly lengthened the time given for the taking and projecting of a movie film.

xxxxxFollowing the break-through made by the Lumière Brothers and others, the motion picture industry quickly took off. Edison, as we have seen, entered the film business after producing his own Projectorscope in 1898, and the Lumière Brothers went on to make close on 1,500 short films. In England Birt Acres, using his Kineoptican, filmed a number of public events and, by visiting Germany in 1895, became the first roving newsreel reporter. His assistant, Arthur Melbourne-Cooper, went on to become a prominent film maker, well known for his new ideas and advertising films. In the United States, the American Mutoscope Company, established by William Dickson in 1895, became a leading film producer for the cinema, making the first Western in 1902, and then a large number of feature films. Meanwhile in France the pioneer Georges Méliès directed over 500 films, many noted for their technical innovations, before leaving the business in 1912.

xxxxxThe novel idea of moving pictures, thrown on a screen and seen by a large audience, quickly spawned the motion picture industry, and this spread rapidly. By the early years of the 20 century a number of companies had been established in America and across Europe. As we have seen, the Edison Company, having produced its own Projectorscope in 1898, then entered the film business in earnest, whilst the Lumière Brothers, though not fully convinced that the big screen had a future, made close on 1,500 short films on a variety of subjects. 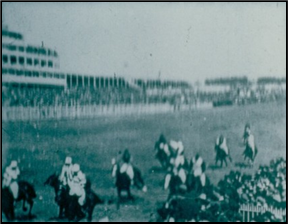 xxxxxAndxworthy of mention as a film producer in these early days is the Englishman Birt Acres (1854-1918). Partnered by Robert Paul (1869-1943), a young mechanical engineer from London, he invented his own projector, the Kineoptican, and filmed the opening of the Manchester Ship Canal and Henley Regatta in 1894, and the Epson Derby (clip illustrated) and the University Boat Race in 1895. And in that year he became the first roving newsreel reporter, visiting Germany to film the opening of the Kiel Canal and Kaiser Wilhelm II reviewing his troops. His actuality films were soon being shown in peep shows across Europe and the United States, and his Birtac, a combined camera and projector invented in 1898, was the first piece of equipment made for the amateur film maker.

xxxxxLikexmany early pioneers in the film industry, Acres could not cope with the fierce competition and was declared bankrupt in 1909, but his assistant, the Englishman Arthur Melbourne-Cooper (1874-1961) went on to become a prominent film maker, responsible for a number of innovations in filming technique. He formed his own company in 1901, the Alpha Trading Company, and became especially known for his advertising films for the likes of Bird’s Custard Powder, Bryant and May (the match manufacturer), and Keen’s Mustard. At one time he was producing a film a day to meet the growing demand, and these included comedies, dramas and sporting events. 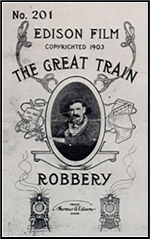 xxxxxAmongxthe most successful film producers in the United States at this time was the American Mutoscope Company. Established by William Dickson in 1895, after he left working for Edison, it was the first company to be formed solely for the production of moving pictures. At first it produced short clips for the peep-show industry, but it then turned to the making of longer films to meet the needs of the “cinema”, and it quickly became Edison’s chief competitor. It produced its first Western in 1902 - one year before Edison’s epic The Great Train Robbery - and it took the first movies of the Pope and an American President. Feature films followed and brought about the birth of the movie star.

xxxxxMeanwhile in France the film pioneer Georges Méliès (1861-1938), starting in 1896, directed over 500 films in the space of sixteen years. He produced a variety of subjects, including comedies, dramas, fairy stories, histories and documentaries - such as The Dreyfus Affair in 1899. Quite a number were 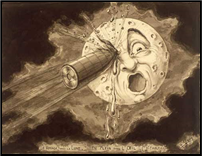 fantasies, like his A Trip to the Moon, a piece of science fiction in which the spacecraft hits the eye of the man in the moon! (illustrated). In many of these he gained a reputation for his special effects and his technical innovations. In 1897 he built Europe’s first film studio at Montreuil, in eastern Paris, but in the long term he was unable to compete with the larger companies, and was forced out of business in 1912.

xxxxxIncidentally, Dickson’s Mutoscope Company sent a team out to South Africa in 1899 to make a film about the Second Anglo-Boer War and, while there, was assisted by a young journalist named Winston Churchill.