xxxxxA massive earthquake off the coast of Portugal - one of the most powerful ever recorded - struck the city of Lisbon on the morning of Sunday, November 1st 1755. Two shocks, about 40 minutes apart, destroyed vast areas of the city, and were followed by a huge tidal wave and the outbreak of fire. It is estimated that well over 30,000 of the city's inhabitants lost their lives. 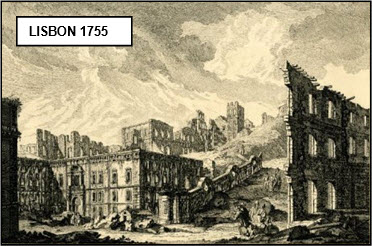 xxxxxThe earthquake, one of the most powerful ever recorded, struck Lisbon at 9.40 am on the morning of November 1st 1755. It was All Saints' Day - when Christians honour the dead - and so the churches were crowded. There were two shocks, some 40 minutes apart. The first shook the capital to its foundations, the second created an 18ft high tidal wave which swept over the city. Soon after this, fire broke out and raged through the city for about six days. It is estimated that well over 30,000 people lost their lives, crushed by falling masonry, drowned by the rising water, or trapped in the fire. Over the city as a whole more than 9,000 to 12,000 buildings were destroyed or were too badly damaged to be repaired.

xxxxxWith the help of much foreign aid, the city was rebuilt with astonishing speed. The country's crown minister (and virtual dictator), Sebastiao de Carvalho, appointed five architects, led by his chief engineer Manuel de Maia, and these were given the task of redesigning much of the capital. Plans were quickly put forward for redeveloping the Baixa, the city centre on the north bank of the river Tagus, an area that had been virtually destroyed. Most of the churches and civic buildings were repaired or rebuilt in a simplified Baroque style, but the 14th century Carmel Church was left as a ruin, looming over the city as a sad reminder of the horrific tragedy. Today its Gothic shell serves as an archaeological museum. The Palace of the Inquisition, completely destroyed, was not rebuilt, but the site was later used for the building of the National Theatre in 1845, during the reign of Dona Maria II. Nor were the offices of the Jesuits restored. The Order was banished and the site used for the building of St. Joseph's Hospital.

xxxxxThe epicentre was situated some distance from the Portuguese coast. It caused damage as far away as Algiers, over 600 miles to the east, and it is said that waves at the port of Cadiz reached a height of 60 feet. According to one account the waves were still 12 feet high when they reached the island of Martinique in the eastern Caribbean Sea - a distance of some 3,800 miles - about ten hours later. And there were reports that the waters of lakes and canals were visibly disturbed as far north as Scotland and Sweden. 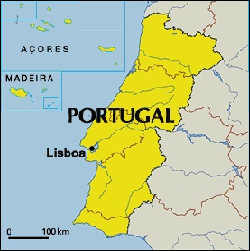 xxxxxInx1760, the English geologist John Michell (1724-1793), a member of the Royal Society, completed his Conjectures Concerning the Cause and Observations upon the Phaenomena of Earthquakes, a work based on his study of the Lisbon tragedy. He concluded that the centre of the quake had occurred under the Atlantic Ocean, and put forward the theory that high-pressure steam was created when fires broke through the seabed, this accounting for the enormous movement of water generated. Today, it is known that there are a number of geological faults in and around Lisbon, but during the 20th century seismic activity was slight.