xxxxxLondon-born Edward Lear, a self-taught painter and naturalist, made an early name for himself by his exquisite paintings of birds. He worked for a time for the London Zoological Society, illustrating works by the society’s ornithologist John Gould. In 1837 he began a wandering existence which took him to Europe, the Middle East, India and Ceylon. During this period he produced some fine landscapes in water colour and oils, and he used some of these to illustrate a series of seven travel journals. Today, however, Lear is best remembered for his books of nonsense. It was while working for the Earl of Derby that, to amuse his patron’s grandchildren, he produced short witty poems of fantasy - many in the form of limericks - and illustrated them with amusing pen-and-ink drawings. When published in 1846 under the title A Book of Nonsense these proved highly popular, and encouraged him to produce four other volumes in the same vein. His style influenced the American writer James Thurber, and can be seen in the work about cats by the English poet T.S. Eliot. Lear once gave drawing lessons to Queen Victoria, and his bird paintings have been favourably compared with those of the American artist and naturalist John Audubon. 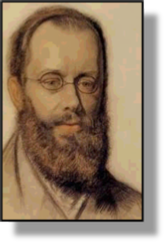 xxxxxLondon-born Edward Lear was the youngest of twenty-one children. He suffered from epilepsy and asthma from an early age and had very little schooling as a result, but two of his sisters, Ann and Sarah, taught him to read and write and draw from nature, and he soon showed a remarkable artistic talent. His drawings earned him money from the age of 15, and in the early 1830s he was employed by the London Zoological Society, producing bird illustrations for the Society’s taxidermist and ornithologist John Gould. He drew no less than 68 plates for his Birds of Europe, completed in 1837, and nine plates for his A Monograph of the Family of Toucans.

xxxxxThe superb quality of his bird paintings, taken direct from nature, gained him a wide reputation, and he eventually published three volumes of bird and animal drawings. But restless by nature and something of a loner, in 1837 Lear embarked upon a long period of travelling, his wanderings taking him not only to Europe, but also to the Middle East, India and Ceylon. It was during this nomadic life that he revealed his extraordinary talent as a landscape artist, both in watercolour and oils. He recorded some of the sights he saw in what he called his Illustrated Journals of a Landscape Painter, a series of seven publications which included his travels in Albania, Italy, Greece, Palestine and Turkey. He eventually settled down in San Remo on the Italian Riviera, and it was here that he spent the rest of his life, in company with his cat, the celebrated Foss.

xxxxxIllustrated below are three of his watercolours: View of Bethlehem, Santa Maria della Salute, Venice, and Thermopylae, Greece.

xxxxxThe Englishman John Gould (1804-1881) who, for some of his work, was assisted by Edward Lear, was one of the most successful and most productive ornithologists of his day. A taxidermist for the London Zoological Society, he began producing bird illustrations late in the 1820s, greatly assisted by his wife, an accomplished artist. By the end of his career he had produced over 40 volumes and 3,000 plates, illustrating birds from all over the world, together with a selection of Australian mammals. Elected a Fellow of the Royal Society for his scientific papers on birds and mammals, his major works included Birds of Europe, Birds and Mammals of Australia, and folios on exotic birds such as toucans, trogons and hummingbirds. He was an astute business man and made a fortune by publishing his own works. 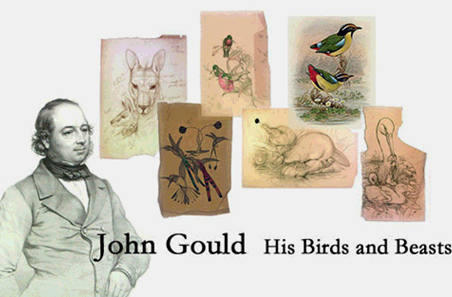 xxxxxThe English ornithologist John Gould (1804-1881), after receiving some training at Windsor Castle - where his father was the senior gardener - was appointed taxidermist for the Zoological Society of London in 1827. Later, with the assistance of his wife, an accomplished artist, he began making hand-coloured lithographs of birds, many life-size. He started by producing these illustrations from skins of exotic birds brought from northern India, and these were produced in his A Century of Birds from the Himalaya Mountains, published in 1832.

xxxxxThis work was so well received that, with the assistance of Edward Lear, he then set about illustrating all the birds of Europe. The result was Birds of Europe, a work of five volumes containing 449 plates, completed in 1837. In the meantime, along with his wife, he produced Monograph of the Toucans in 1834 and of the Trogons four years later. These works were so successful that in 1838 he and his wife were able to visit Australia, a country where little was known about bird and animal life. During their gruelling two-year stay they made a large collection of bird and mammal specimens, and this provided the contents for his two most ambitious works, the seven-volume The Birds of Australia - published over a period of eight years and containing 681 plates - and his Mammals of Australia, a three-volume folio, completed in 1863. Sadly, his wife died in 1841, and he was then obliged to employ other artists to enhance his own sketches. Among other works which followed were Partridges of America in 1850, a stunning work on Hummingbirds the following year, and volumes on birds of Great Britain and Asia.

xxxxxBut, by a strange quirk of fate, Lear’s brilliance as an artist was overshadowed by his equally outstanding ability to compose short pieces of witty light verse, and to illustrate them with some delightful pen-and-ink sketches. This came about in the 1830s when he was working for the Earl of Derby, making drawings of his private menagerie at Knowsley, Lancashire. It was then that he put together some amusing, zany tales and poems, charmingly illustrated, to amuse his patron’s 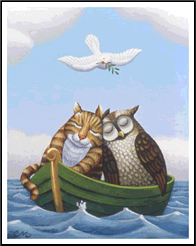 grandchildren. When these were published at his own expense in 1846, under the title A Book of Nonsense, they proved an instant success. And such were their popularity that he wrote an enlarged version of the book in 1861, and then went on to write four more volumes of nonsense, including Nonsense Songs, Stories, Botany and Alphabets in 1871, More Nonsense Rhymes in 1872 and Laughable Lyrics five years later. These works contained a large number of amusing poems, full of original nonsense and fantasy - such as The Owl and the Pussy Cat - and served to make popular the five-lines of amusing verse known as a “limerick”. It is by such works of nonsense that Lear is now generally remembered.

xxxxxHis exquisite bird paintings have been favourably compared with those of the American artist and naturalist John Audubon, and, as an associate member of the Linnean Society, two parrots, a cockatoo and a macaw, bear his name. His influence as a humorist can be seen in the works of the American writer James Thurber, and in Old Possum’s Book of Practical Cats, written for children by the English poet and playwright T.S. Eliot.

xxxxxIncidentally, in 1846, the same year that he published his first Book of Nonsense, he gave lessons in drawing and landscape painting to Queen Victoria. She employed him after seeing the quality of his work in his Illustrated Excursions in Italy, published in April of that year. ……

xxxxx…… The tabby cat called Foss joined the Lear household as a kitten in 1873 and, by way of the numerous cartoons drawn of him, became a well known figure in Lear’s works. He died in November 1887 and was buried in Lear’s garden in San Remo. Lear himself died just two months later. ……

xxxxx…… The origin of the limerick is not known for certain, but the name probably comes from the chorus of an old Irish marching song , “Will You Come Up to Limerick?”, to which the singer or others added impromptu lines. Lear maintained that he based his own verses on a nursery rhyme that began “There was an old man of Tobago”. Two of his many limericks are given below:

xxxxxIn total, Gould was responsible for more than 40 volumes and 3,000 coloured plates, featuring birds from all over the world and a selection of Australian mammals. In addition, he wrote some 300 scientific papers - many describing new species - and for these he was elected Fellow of the Royal Society in 1843. His sketches, brilliantly enhanced by artists, provided his famous illustrations, but his stunning success was very much due to the astute business skill with which he handled the make-up and publication of his folios. This made him one of the most productive and celebrated ornithologists of the 19th century.

xxxxxIncidentally, Gould is sometimes known as England’s Audubon, but his epitaph, which he himself chose, reads “John Gould the Bird Man”.