xxxxxIt was in 1205 that Layamon, a priest in Worcestershire, England, wrote his poem Brut, one of the earliest English poems of any length, and marking a revival of native literature since the Norman Conquest. A romance-chronicle of Britain from Roman times to the 7th century, it contained the first reference in English to the legend of King Arthur and his Round Table.

xxxxxLayamon was a priest at Ernley (now Areley Kings) in Worcestershire. He wrote the poem Brut in about 1205. It is a romance-chronicle on the history of Britain from the legendary Roman general Brutus to the reign of Cadwalader, king of Gwynedd, in the seventh century. It is remarkable for being one of the earliest English poems of length (some 16,000 lines of unrhymed verse), and also for the fact that it contains the first reference in English to the legend of King Arthur and the founding of the Round Table. It marks, too, the revival of English literature which, since the Norman Conquest, had virtually been suppressed in favour of Latin and French. 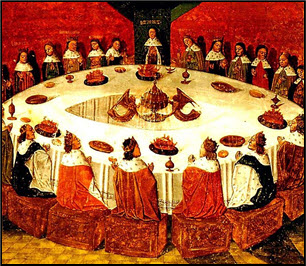 xxxxxLayamon (the name means “law man”) based the poem on the French translation by Robert Wace of the Latin chronicle by Geoffrey of Monmouth entitled Historia Regum Britanniae, completed about the year 1139. Geoffrey introduced the Arthurian legend into European literature, but Layamon's poem does include some original material, notably the founding of the Round Table (illustrated) and additional information on the characters Lear, Merlin and Cymbeline. The British Museum in London holds two manuscript copies of the poem.

Layamon: image in stained-glass window – Church of St. Bartholomew, Areley Kings, Worcestershire, England. Round Table: from a manuscript completed by the artist Michel Gantelet in 1472 – National Library of France, Paris.