xxxxxThe preacher John Knox, founder of the Presbyterian Church in Scotland, was appointed chaplain to Edward VI in 1551, and assisted in the making of the Book of Common Prayer. He spent the whole of Mary's reign on the continent, where he met and was greatly influenced by the French Protestant reformer John Calvin. In 1559 he returned to Scotland, where his fiery preaching caused a revolt against the Roman Catholic Mary of Guise, then acting as regent for her daughter, Mary Queen of Scots. This encouraged Elizabeth to send troops to support the Protestant cause and, with the death of Mary of Guise in 1560, the Scottish parliament adopted the Protestant Confession of Faith, drawn up in the main by Knox himself. With the return of Mary Queen of Scots the following year, he again led the struggle against Roman Catholicism and, when she fled to England in 1568, Calvinism was recognised as the established religion of Scotland. His History of the Reformation in Scotland, published in 1586, contains a record of talks he had with Mary Queen of Scots in an attempt to persuade her to become a Protestant. 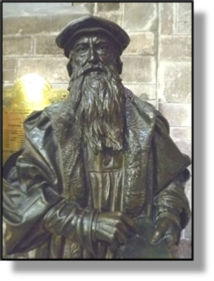 xxxxxThe Scotsman John Knox founded the Presbyterian Church of Scotland, but he was originally a Roman Catholic priest. He was converted to his Protestant beliefs by the Scottish reformer George Wishart and when, in 1546, his friend was burned at the stake, Knox virtually took on his mantle. He joined other Protestant rebels who were holding out in St. Andrews castle, and soon proved his worth as a preacher and a leader. The following year, however, the fortress fell to Scottish and French troops. He was taken back to France and spent the next nineteen months as a galley slave, only being released following the intervention of King Edward VI.

xxxxxHe then returned to England where, having joined the ministry of the Church of England, he served as a licensed preacher, working in Berwick-upon-Tweed and Newcastle before being appointed a chaplain to the king in 1551. He assisted with the formation of the Book of Common Prayer, published in 1552, but his objections to some passages of this work marks him out as one of the founders of English Puritanism, that movement which was to play so important a role in the affairs of the nation in the 17th century. Then on Mary's accession in 1553, he fled to the continent and, in his absence, was condemned to be burned at the stake. He served as a minister for English refugees in Frankfurt, and then held a similar post in Geneva, where he met John Calvin, the French Protestant reformer who had such a profound influence upon his religious thinking. 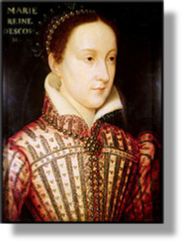 xxxxxFollowing the accession of Elizabeth, he returned to Scotland in 1559 in order to promote Presbyterianism, joining the revolt against the rule of the Roman Catholic Mary of Guise, regent for her daughter, Mary Queen of Scots (illustrated). His indomitable spirit and his fiery preaching won many converts, and in 1559 led to open rebellion. After a particularly powerful sermon, delivered at Perth against idolatry, Protestants seized Edinburgh and destroyed Catholic property in Stirling, Scone and St. Andrews.

xxxxxThis active opposition played an important part in the forming of a strong anti-government party at Edinburgh. And on the strength of this growing support, Knox then persuaded Queen Elizabeth to send material help - some 10,000 troops - and this, together with the death of Mary of Guise in 1560 and the withdrawal of her French troops, changed the whole situation. In August of that year the Scottish Parliament abolished the Roman Catholic form of worship and adopted the Protestant Confession of Faith, compiled in the main by Knox himself and very similar to the Geneva model. And in the same year Knox drew up the First Book of Discipline, the constitution for the Scottish reformed church. These measures were substantial, but they excluded Knox's educational and social reforms, - causing him much bitterness - and they were under threat in the space of a year. 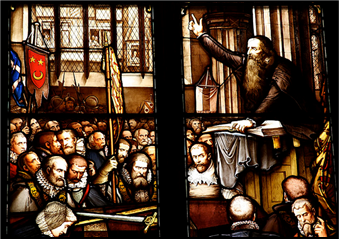 xxxxxIn 1561 the widowed Mary Queen of Scots returned to Scotland, and the religious conflict was once more on the boil. Again, Knox played a crucial part. As minister of Saint Giles Cathedral, Edinburgh, he came out openly against Mary's policies, and met her on a number of occasions to argue the Protestant cause. The end to this phase of the struggle came somewhat unexpectedly. The marriage of Mary Queen of Scots to Lord Darnley, a Roman Catholic, in 1565 caused alarm in the Protestant camp, but with the murder of Darnley in 1566 and Mary's defeat and flight to England two years later, the outcome was resolved. The Scottish parliament reaffirmed the Act of 1560 in favour of the reformed religion, and Calvinism was recognised as the established religion of Scotland. Only in a few districts in the north of the country did Roman Catholicism remain in any strength. Knox, the outstanding figure of the Reformation in Scotland, remained a leading churchman and outspoken preacher until his retirement and death in 1572. 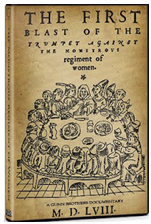 xxxxxOne of his major works was the notorious First Blast of the Trumpet Against the Monstrous Regiment (Rule) of Women, published in Geneva in 1558. It was directed against the three Roman Catholic monarchs, Mary of Guise, Mary Queen of Scots, and Mary I of England, but, unfortunately it was published in the year of Elizabeth's accession. She took his attack on women personally, and banned him from her kingdom! Another work, History of the Reformation in Scotland, published posthumously in 1586, contains a remarkable record of the personal interviews he had with Mary Queen of Scots during the 1560s.

xxxxxIncidentally, despite being partly paralysed by a stroke, when Knox heard of the St. Bartholomew Day's Massacre of August 1572, he dragged himself to his pulpit in St. Giles Cathedral, Edinburgh, to condemn the atrocity and warn of its possible consequences. He died exactly three months later. ......

xxxxx...... Twenty years after the death of Knox, King James VI consented to the so-called "Golden Act", recognising the Presbyterian ecclesiastical courts and revoking the monarch's rights over the government of the church. It must be added, however, that on becoming King James I of England he back-tracked and re-imposed his religious authority over his Scottish subjects!