xxxxxThe event was marked by a royal banquet at Buckingham Palace, attended by fifty foreign kings and princes, and all the heads of the British Empire’s dominions and colonies. The following day the queen travelled in an open landau to Westminster Abbey - escorted by a vast military procession - to attend a Thanksgiving Service. She was cheered by enthusiastic crowds along the entire route, and given a rapturous reception when, on her return, she appeared on the balcony at Buckingham Palace. She later wrote in her diary: “No one ever, I believe, has met with such an ovation as was given to me, passing through those six miles of streets … The cheering was quite deafening, and every face seemed to be filled with a real joy. I was much moved and gratified.”

xxxxxBut not everyone shared in the rejoicing. In Ireland - not surprisingly - there were public protests against British rule, and in the United States large numbers of Irish Americans gathered in New York and Boston to denounce British oppression. 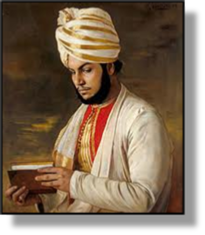 xxxxxAndxthe event also brought in its wake an unexpected and embarrassing consequence. As part of the Jubilee festivities, two Indian servants were appointed as waiters at the Queen’s table, and this trivial matter, as it so happened, was to bring about a serious crisis within the royal household.

xxxxxReminiscent of her scandalous relationship with her Scottish manservant John Brown some years earlier, Victoria now fell under the spell of one of them, a young handsome Muslim named Abdul Karim (illustrated). Within a short time he had became her constant companion, assisting her in her daily duties and teaching her Hindustani. The Queen sent him notes signed “your loving mother”, and within two years had appointed him her “Indian Secretary” (her “Munshi” in urdu), with a cottage provided in the royal grounds. This indiscreet affection and devotion for one whom many regarded as an ambitious young imposter caused consternation among the royal household. Certain senior figures attempted to discredit him and have him removed, and a number of members threatened to resign. 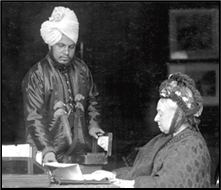 xxxxxMatters came to a head in the year of the Queen’s Diamond Jubilee when, to everyone’s disbelief, she declared that she wished to bestow a knighthood on her loyal Indian servant. When this was opposed, she even threatened to pull out of the programme of celebrations. Only a threat by the Prince of Wales to have her declared insane brought her to her senses, though Karim remained at her side throughout the Diamond Jubilee events. When Victoria died in 1901 Karim was dismissed and sent back to India - where the Queen had thoughtfully bought him some land for his retirement. The whole affair was but a sad reflection and reminder of the real need Victoria had for male companionship following the loss of her beloved Albert some forty years earlier.