xxxxxThe English man of letters Samuel Johnson dominated the London literary scene during the latter part of the 18th century. He is remembered above all for his famous Dictionary, published in 1755 and containing 40,000 entries. He first wrote for the Gentleman's Magazine - producing a wide variety of articles and reporting, by hearsay, on the debates in parliament - but then went on to produce his own publications, the Rambler and the Idler. In these works in particular, he showed his skill as a writer and the width of his knowledge and interests. A great conversationalist, he loved to hold forth on all manner of subjects. As we shall see, in 1764, together with his friend Joshua Reynolds, he founded The Literary Club, a "talking shop" for all the intellectuals of the day. And to these later years belong his edition of the works of Shakespeare and his Lives of the Poets, as well as his famous trip to Scotland in 1773 (G3a), accompanied by his brilliant biographer James Boswell. 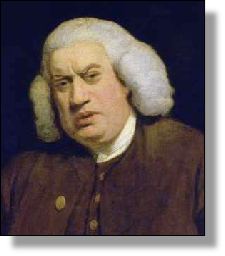 xxxxxThe larger-than-life English man of letters Samuel Johnson dominated the literary scene in London during the latter part of the 18th century. A garrulous eccentric, he is remembered, above all, for the quality of his Dictionary, published in 1755; some outstanding literary criticism - notably the Lives of the Poets; and the great circle of writers and artists he mixed with as members of his Literary Club, founded in 1764. These included the dramatist Oliver Goldsmith, the actor David Garrick, the philosopher Edmund Burke, the novelist and diarist Fanny Burney, his talented biographer James Boswell, and the artist Joshua Reynolds (who painted the portrait here shown). 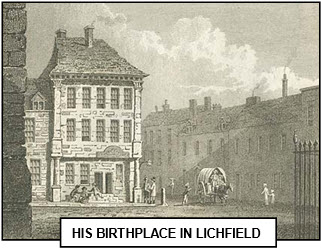 xxxxxA brilliant conversationalist, writer and critic, Johnson was born in Lichfield, Staffordshire, the son of a bookseller. He only went to the local school, but he read widely in his own time. When he went up to Pembroke College, Oxford, in 1717, he impressed his tutor with his knowledge of Latin poetry, but he was forced to leave early through lack of funds. It was at this time that he suffered the first of two serious bouts of depression, an experience which left him with a strong religious faith. In 1735, he married Elizabeth Porter, an attractive and intelligent widow about 20 years his senior, and this brought a measure of comfort and stability to his life, as well as providing money for the opening of a school at Edial, near Lichfield. Unfortunately, this only attracted three pupils, so in 1737 he abandoned teaching and, accompanied by his wife and David Garrick (one of the three pupils), he journeyed to London with - so we are told - just a few pennies in his pocket.

xxxxxThere, in the heart of the city that he came to love so much, he managed to eke out a living, mainly by contributing essays, poetry and articles to the Gentleman's Magazine. His contributions, churned out on a wide range of subjects, included a series of speeches purporting to come from debates being held in the House of Commons. Satirically called Debates in the Senate of Magna Lilleputia, they were based purely on hear-say, and were not always adjudged accurate. However, despite his declared opposition to the Whig government of the day, they were generally considered unbiased. It was during these early days, the 1740s, that he wrote a candid and sympathetic biography of his wayward friend, the poet Richard Savage, and published The Vanity of Human Wishes, his impressive and, arguably, finest poem. A moral satire based on a work by the Roman poet Juvenal, it condemns as futile and empty the pursuit of greatness and happiness. 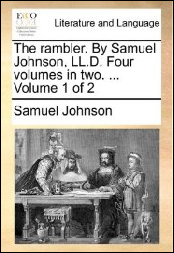 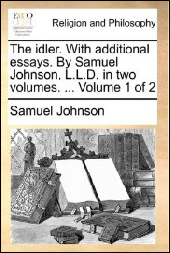 xxxxxThen in 1750 he founded his own periodical, The Rambler, and followed this up with The Idler, published in a weekly newspaper from 1758, and written in a somewhat lighter vein. Through these periodicals he produced novels, biographies, and a large number of brilliant essays on current affairs, literature and literary criticism, the majority aimed to "inculcate wisdom and piety". These periodicals, and his individual writings, were well received and earned him a reputation as an astute observer of human nature, but they were not sufficient to solve his financial problems in full. When his mother died in 1759, for example, he was obliged to put pen rapidly to paper to pay off her debts and the funeral expenses. The result was his long work of fiction Rasselas, Prince of Abyssinia, a piece of romance prose about a young man who sets out to fulfil his daydreams and ends up disappointed and disillusioned. It sold quite well, but in the same year he was obliged to move from his house in Gough Square, behind Fleet Street, (now a Johnson museum), to find cheaper accommodation. 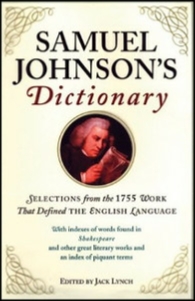 xxxxxThe turning point in his career came in 1747 - though he didn't realise it at the time - when a group of publishers, clearly impressed by his talent, commissioned him to produce a comprehensive dictionary of the English Language. It took eight years to complete the two volumes, despite the assistance of six copyists, but the finished work, containing some 40,000 entries, was a huge success, and proved a model for future works of its kind. Above all, its definitions were full and lucid, and the examples of a word's usage were well chosen and taken from as far back as Elizabethan times. There were, of course, omissions, and personal prejudice certainly crept in - for example, he would make no mention of any writer of dubious morals! - but for such an extensive undertaking it was a brilliant piece of work, and was seen as such. Dubbed "Dictionary Johnson", he soon became an influential figure in London's literary circle, together with a fast growing international reputation. Then, mercifully, in 1762 he was granted a government pension "not for anything you are to do, but for what you have done", and this put an end to his money worries.

xxxxxAs we shall see (1773 G3a), the next twenty years were to witness the founding of his famous Literary Club - where he could indulge his passion for conversation and argument - and the production of two major works, a scholarly edition of Shakespeare's plays, and his brilliant ten-volume treatise on The Lives of the Poets. And to this period belongs his long friendship with James Boswell, and their famous trip to the highlands and islands of Scotland in 1773. These were successful years, but they were not without their stress. His second emotional breakdown occurred in the 1760s and, like the first one in 1730, it took some time for him to recover. In fact, despite his dominating appearance and air of self-confidence, he was often a sick and troubled man, and this coloured his personality and his work.

xxxxxIncidentally, in his own words, Johnson was born "almost dead". He contracted scrofula (a disease of the lymphatic glands) soon after birth, and at the age of two and a half years was taken to London to be touched by Queen Anne - the belief then being that this particular affliction could be cured by the touch of a royal personage. The ceremony proved of no value, and he was cured by other means, but he kept the queen's gold "touch piece" for the rest of his life. The hammered gold coin, known as an Angel, can now be seen in the British Museum. 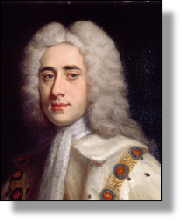 xxxxxA good illustration of Johnson's brilliant command of the English language, and his extraordinary powers of invective, can be seen when he was working on his Dictionary. It appears that Lord Chesterfield (1694-1773), a statesman and diplomat, had been named as a patron of the undertaking, but, in fact, had shown no interest in the project until just before publication, when he wrote two articles praising the impending work. Johnson wrote the following in reply:

xxxxxAnd to bang home his point, part of his definition of the word "patron" reads: Commonly, a wretch who supports with insolence, and is paid with flattery. 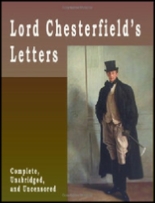 xxxxxFurthermore, this was the same Lord Chesterfield who gained a literary reputation for his witty and charming Letters to his Son on the Art of Becoming a Man of the World and a Gentleman (followed later by letters to his godson). Written from 1737 to 1768, they aimed at showing how a gentleman should behave in society, but Johnson dismissed the letters as "teaching the morals of a whore and the manners of a dancing master". Nor, it would seem, did the letters bear fruit. His son was later described as a "lout" and, in the opinion of the writer Fanny Burney, his godson showed few signs of breeding.

xxxxxIs not a patron, my Lord, one who looks with unconcern on a man struggling for life in the water, and, when he has reached ground, encumbers him with help. The notice which you have been pleased to take of my labours, had it been early, had been kind; but it has been delayed till I am indifferent and cannot enjoy it, till I am solitary and cannot impart it, till I am known, and do not want it.