xxxxxAs we have seen (1156 H2), following the victory of the Minamoto family in the Japanese civil war, the new leader was Yoritomo. In 1192 he introduced the shogunate system whereby hereditary lords (shoguns) governed the country and the Emperor became a figurehead - a régime which, as we shall see, was to survive until 1868. But the new system was not a guarantee of peace. As we shall see, another civil war broke out in 1336 (E3). The military backbone of this new political order was made up of the Samurai, a military caste which followed a strict code of honour and was divided into three ranks, the vassals and the mounted and foot soldiers. Later, many of these were to become government administrators. 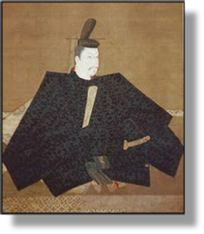 xxxxxAs we have seen (1156 H2), the Minamoto family gained a decisive victory over the Taira family during the civil war which dominated Japanese politics throughout the reign of Henry II. Thexleader who emerged from the conflict, Minamoto Yoritomo (1147-1199) (illustrated), then established a new power-base for the administration of the country. In 1192 he founded a military government at Kamakura and introduced the shogunate system, a régime whereby hereditary feudal lords (shoguns) governed the entire country, and the emperor was but a figurehead. It was the form of government which was to survive in Japan until 1868, but it in no way put an end to internal strife. As we shall see, in 1336 (E3) a civil war broke out between rival emperors at the courts of Yoshino and Kyoto, and peace was not restored until 1392. 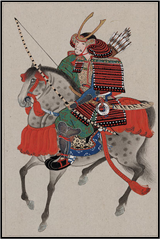 xxxxxThe military backbone of this new political order was provided by the military caste known as the Samurai, whose families made up about seven to eight percent of the population. They followed a strict code of honour (known as the bukshido or Way of the Warrior) and were obliged to carry out specific duties in return for social privileges. Under Yoritomo a rank system was introduced by which the military were divided into the vassals, mounted samurai and foot soldiers. The Samurai remained an important and essential element in the shogunate system, but in the seventeenth century their role became less militaristic and many became government administrators.