xxxxxThe French Emperor Napoleon III, under the pretext of protecting the work of the Paris Foreign Missions Society, invaded Vietnam in 1858. After capturing the city of Sai Gon in the Mekong Delta, the expeditionary force went on the offensive in 1862, and quickly forced the Vietnamese to give way. By 1864 all of the southern area, known as Cochinchina, was in French hands, together with the neighbouring kingdom of Cambodia, ceded to the French the previous year by the Cambodian king as a means of protecting his state against attacks from his neighbours, Vietnam and Siam (today’s Thailand). In the early 1880s the French advanced into north Vietnam, but there they faced stiff opposition from the Black Flags, members of a gang of Vietnamese and Chinese bandits. They were defeated on a number of occasions, but in 1883 they overwhelmed the Vietnamese army at the Battle of Thuan An and gained control of the northern regions of Assam and Tonkin. The following year, however, the Chinese opposed this occupation and the Sino-French War broke out in August. The French were successful in a number of battles, destroying a Chinese fleet at Fuzhou, and gaining victories at Dong Dang and Ky Lua, but a precipitous retreat from Lang Son, and a defeat at the Battle of Phu Lam Tao brought down the French government. A peace settlement was agreed in 1885 in which the Chinese - fearing an attack on Korea by Japan - agreed to the Tientsin Accord, which gave France control over both Annam and Tonkin. The French protectorate of Indochina was formed in 1887 (Vietnam and Cambodia) and extended to include Laos following a successful war with Siam in 1893. 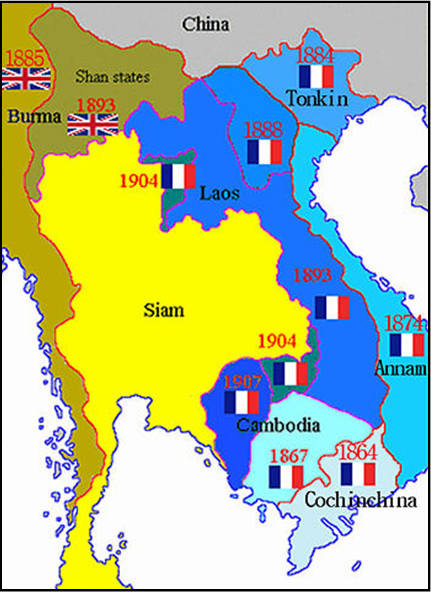 xxxxxFrenchxinterest in South East Asia had its beginnings in the 17th century when Father Alexandre de Rhodes, a French Jesuit, arrived in Vietnam in 1620 to establish a mission. He spent over 15 years there and, on his return to France, was instrumental in setting up the Paris Foreign Missions Society in 1659. Ostensibly, it was to protect the work of this organisation that Napoleon III sent a task force to Tourane (present day Da Nang) in September 1858, although, as we have seen, the French Emperor was clearly bent on colonial expansion at that time.

xxxxxThe force, made up of 14 gunships and some 5,000 men, occupied the port of Tourane, but after a few months, plagued by disease, it moved further south and captured the city of Sai Gon (present day Ho Chi Minh City) in the Mekong delta. The garrison was then reinforced, and ordered to go on the offensive in 1862. The Vietnamese were soon forced to give way. The French obtained treaty ports in Annam and Tonkin - the central and northern regions of Vietnam - and then in 1864 all of the southern area, known as Cochinchina, fell into their hands. Inxthe meantime, Norodom, the king of Cambodia, fearing a take-over bid by one of his neighbours - Vietnam or Siam - had asked for the establishment of a French protectorate over his kingdom. In 1867 this extension of French power was accepted by Siam (today’s Thailand) in exchange for some border territories.

xxxxxControl over Cochinchina, the southern region of Vietnam (see map above), together with the protectorate over Cambodia, marked the beginning of French Indochina, but the conquest of northern Vietnam, regarded by China as their sphere of influence, proved a more daunting task. In the early 1880s French troops advanced northwards and took control of Hanoi and Haiphong, but were met with strong resistance, particularly from the Black Flags, members of a well-organised gang of Vietnamese and Chinese bandits who controlled much of Tonkin, the most northerly area. In May 1883 they suffered a humiliating defeat at their hands at the so-called Battle of Paper Bridge, and at the Battles of Phu Hoai and Palan - in the August and September - they failed to achieve an outright victory. In the December they managed to take the town of Son Tay, but only after suffering heavy losses. 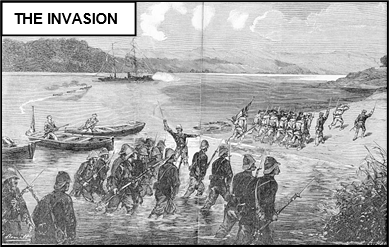 xxxxxInxxthe meantime, however, a powerful naval force had landed near the capital Hué (illustrated), and in August 1883 had overwhelmed the Vietnamese at the Battle of Thuan An. AxFrench threat to “erase Vietnam from history” forced them to sue for peace, and by the Treaty of Hué in June 1884, both Annam and Tonkin were made French protectorates. Meanwhile, in March 1884 the French had taken on a strong force of Chinese troops, seized the town of Bac Ninh with comparative ease, and forced them to come to terms. Byxthe Tientsin Accord (or Li Fournier Convention), signed in the May - an attempt to settle the local war between France and China - the Chinese recognised a French protectorate over north Vietnam and agreed to withdraw their troops from Tonkin. But the fighting was far from over. The Tientsin Accord was extremely unpopular in China, and the war party opposed the withdrawal of troops from Vietnam. They were ordered to stand firm. Thexcrisis came to a head in June when a French column on its way to occupy Lang Son near the Chinese border was ambushed at Bac Le by a large Chinese force. The column eventually managed to escape, but 22 of their number were killed and some 70 wounded. A war between the two countries was inevitable. 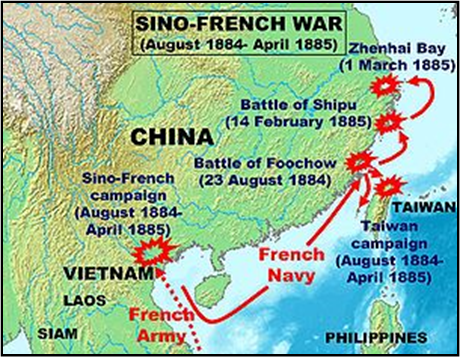 xxxxxThe Sino-French War began in August 1884 and was concluded in April the following year. The conflict opened with the Battle of Fuzhou, a naval encounter in Mawei harbour in which one of China’s four fleets was almost totally destroyed and the naval dockyard at Fuzhou (Foochow) was badly damaged. Then in October an expeditionary force landed on the island of Formosa (Taiwan), capturing the northern city of Keelung, but failing to take the fishing town of Tamsui. Later, in 1885, the French launched two more naval attacks on the Chinese mainland, the first near Ningbo - the Battle of Shipu - and the second at Zenhai Bay.

xxxxxIn Vietnam, the major battles occurred in the early months of 1885. A Chinese force was defeated at the village of Nui Bop in January, and the Lang Son campaign, launched by the French the following month, seized the town of Lang Son and, by the Battle of Hoa Moc - the fiercest battle of the war - raised the siege of Tuyen Quang, where the garrison had been surrounded for some four months. Thisxwas followed by the Battle of Dong Dang which cleared the Chinese from much of Tonkin, but the French were seriously defeated at the Battle of Bang Bo and, despite a notable victory at the Battle of Ky Lua - where Chinese casualties numbered 1,200 killed and some 6,000 wounded - their precipitous retreat from Lang Son, together with news of another defeat at the Battle of Phu Lam Tao on the western front, brought about the downfall of the French government, humiliated by what came to be known as “The Tonkin Affair”. The new government negotiated a peace settlement, and in April the Chinese, fearing that Japan was about to invade Korea - then under their protection - accepted the terms agreed earlier at the Tientsin Accord. 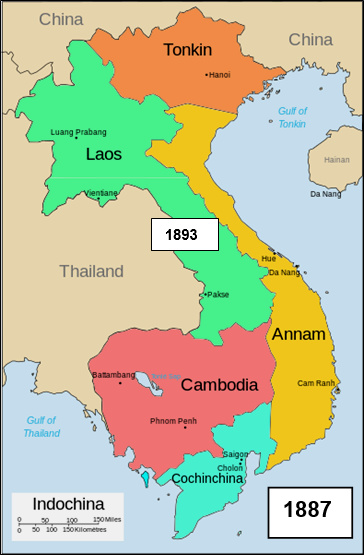 xxxxxFrench Indochina was officially established in October 1887, comprising Cochinchina, Annam and Tonkin (modern Vietnam) and the kingdom of Cambodia, but the general conduct of the war - and particularly the Tonkin Affair - tarnished France’s reputation as a colonial power and slowed down expansion. Nevertheless, the French gained a protectorate over the island of Madagascar in 1890 - making it a colony six years later - and in 1893 they extended Indochina by going to war with Siam and forcing King Chulalongkorn to cede to them the territory of Laos. As for the Chinese, because of their defeat at the naval encounter at Fuzhou, they began to modernise their navy on Western European lines. As we shall see, however, the bulk of their steamship fleet was destroyed or captured during the First Sino-Japanese War of 1894-1895.

xxxxxIncidentally, Laos was granted independence in 1949 and Cambodia in 1953. The Southern half of Vietnam became independent in 1949 and, following the defeat of the French at the Battle of Dien Bien Phu, the Viet Minh communist regime of North Vietnam gained its independence in 1954. ……

xxxxx…… As we have seen, the advance of the French in South East Asia and the interest they showed in forging commercial links with Burma, alarmed the British. Following a trading dispute with the Burmese king Thibaw Min, they invaded Upper Burma in 1885 (the Third Anglo-Burmese War) and at the beginning of 1886 made Upper and Lower Burma (now named Myanmar) into an Indian province.