xxxxxThe Pole Johannes Hevelius, a brewer by day, spent his evenings in his home-made observatory in Danzig (Gdansk). Here, in 1647, he produced his Selenographia, one of the earliest detailed maps of the lunar surface. Three years after his death his wife published his catalogue of more than 1,500 stars - the most comprehensive of its day - and a celestial atlas made up of 54 plates. During his lifetime he made a special study of sun spots, estimated the period of the solar rotation, and discovered four comets. He also studied the phases of Saturn, and was one of the first to observe the transit of Mercury. In determining stellar positions he preferred to use the naked eye, but his accuracy was confirmed when the English astronomer Edmond Halley visited his observatory in 1679 and checked his results with a telescope. 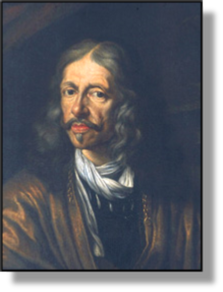 xxxxxThe Polish astronomer Johannes Hevelius was born and educated in Danzig (present-day Gdansk) and, after a short period of travelling, spent the remainder of his life in this city. He was a brewer and city councillor by day, but from the age of thirty he spent his evenings in his home-made observatory on the roof of his house. Here, using various telescopes of his own making – including a tubular instrument made of wood and wire which was about 150 feet in length – he studied details of the sun, the moon and the planets, and worked out the position of hundreds of stars. In determining stellar positions he preferred to use the naked eye, and the accuracy of this method was proven in 1679 when the English astronomer Edmond Halley visited his laboratory and, using a telescope, compared results.

xxxxxIn observing the sun he made a special study of sun spots and gave the name faculae to the bright areas near these spots, a term which is still in use today. And over a period of three years (1642-1645) he came close to an accurate value for the period of the solar rotation. During these observations he also discovered four comets, and advanced the theory that these bodies orbited around the sun in parabolic paths. In addition, he studied the phases of Saturn, and was one of the first to observe the transit of Mercury. 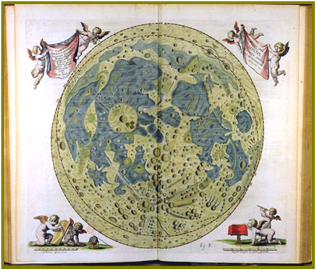 xxxxxIn 1647 his Selenographia provided one of the earliest detailed maps of the lunar surface (illustrated), and some of the features he named then remain in use today. This work also contained a record of his discovery of the libration of the moon in longitude. Such research greatly increased interest in the lunar landscape and its composition. Three years after his death, his catalogue of more than 1,500 stars - the most comprehensive of its day - together with a celestial atlas contained in 54 plates, were edited and published by his wife, Elizabeth, under the title Prodromus Astronomiae.

xxxxxIncidentally, Hevelius named a number of stars. He called a very small, inconspicuous constellation in the northern hemisphere Lynx, on the grounds that it would take the eyes of a Lynx to see it! He gave the name Stella Mira (wonderful star) to the first star discovered to vary periodically in brightness, and he named a faint constellation Sextens in memory of his sextant which was destroyed in a fire in 1679.

xxxxxAnother amateur astronomer at this time was the English clergyman Jeremiah Horrocks (c1617-1641). Between officiating at services on one particular Sunday in 1639, he became the first person to observe a transit of Venus, a phenomenon which had been overlooked in the tables of the German astronomer Johannes Kepler. His account of this event was published by Hevelius in 1661. His other works, including a study of tides and the moon’s orbit, were published after his death by the Royal Society. 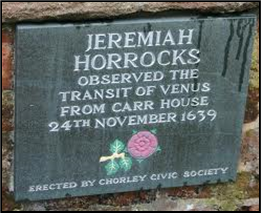 xxxxxIt was in 1639 that another amateur astronomer of this period, the English clergyman Jeremiah Horrocks (c1617-1641), became the first person to observe a transit of Venus, a phenomenon which he had predicted some time earlier and which had been overlooked in the tables of the German astronomer Johannes Kepler. He took up the curacy of Hoole in Lancashire in that year and, so we are told, observed the transit from his house in Bretherton, between officiating at church services on Sunday the 24th November (in the old style calendar). His account of this event was published by Hevelius in 1661.

xxxxxHe was born at Toxteth Park, Liverpool and, after attending Cambridge University, returned to his home area and devoted much of his spare time to astronomy, hoping to extend the work of the Danish astronomer Tycho Brahe and that of Kepler. During his hobby he studied tides, showed the moon's orbit to be all but elliptical, and put forward an improved value of 14 minutes for the solar parallax, a measure of the Earth's mean distance from the sun. Among his works were Venus in Sole Visa of 1662, and Jeremiae Horroccii Opera Posthuma, a sketch of his life, published by the Royal Society.