xxxxxAs we have seen, in securing his new kingdom after his victory at Hastings, William the Conqueror made fairly quick work of crushing rebellions in the north, and bringing to heel the supporters of Edgar Aetheling, the named heir to Edward the Confessor. But in 1070 the revolt led by Hereward the Wake, a landowner in Cambridgeshire, put a strain upon his resources and skill. Based on the island of Ely in the fen district, the Norman troops experienced great difficulty in crossing this vast, boggy area, and at one time William himself was obliged to conduct operations. The revolt was eventually crushed in 1071, after the Danes failed to come to the aid of the rebels, but Hereward "the watchful one" managed to escape. Nothing is known of his fate, but there is no lack of legends and ballads about his heroic exploits. He later became the hero of a novel written by the English writer Charles Kingsley in 1866. 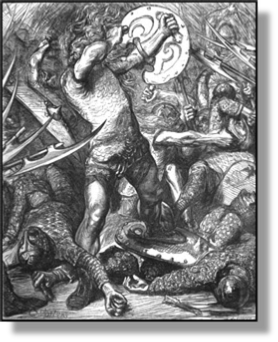 xxxxxDirectly after his successful invasion of England, William the Conqueror was faced with rebellions in many parts of the country, particularly in the North. As we have seen, these he quickly and ruthlessly crushed. Thenxfollowed a serious challenge to his throne from the supporters of Edgar Aetheling, the grandson of Edmund Ironside and named heir to Edward the Confessor. Again, however, rebellions on his behalf in 1068 and 1069 were swiftly and cruelly suppressed by the so-called Harrowing of the North, a series of campaigns by which vast areas of land were laid waste, and thousands were killed or died of starvation. Aetheling (meaning "of royal blood") was wise to make peace in 1074.

xxxxxBut the revolt of 1070, led by Hereward the Wake, a local landowner, fighting from his stronghold on the Isle of Ely, was quite a different matter. He and a few hundred loyal followers put up a spirited fight, clearly assisted by the terrain. In attempting to reach the rebels, the Norman cavalry and foot soldiers found great difficulty in crossing the fens, a vast area of bogs, swamps and rivers. Many drowned while others proved an easy target for Hereward's archers. At one point the rebels, together with a number of Danish sailors, felt confident enough to attack the Norman stronghold of Peterborough and sack the Abbey. And such was the strength of their defence that King William was obliged to involve himself in the fighting, directing operations from his newly built castle at Cambridge. 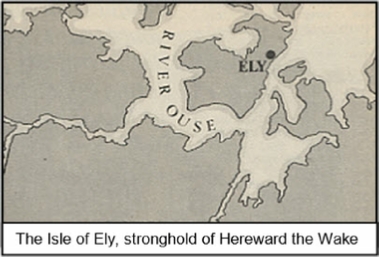 xxxxxThe Isle of Ely soon became a rallying point for opposition to the Norman occupation and the rebels grew in number. But hopes that the Danes would come to their aid were quickly dashed when their leader, King Sweyn, sued for peace. In 1071 the Normans finally managed to cross the fens in sufficient numbers and the rebellion was crushed like those before it. Hereward "the watchful one" managed to escape but nothing is known of his fate.

xxxxxIncidentally, as one might expect, there are many legends and ballads about the exploits of this Anglo-Saxon hero and how he finally met his death. One such legend tells how King William was pleased to have this mighty warrior in his army and that, while serving in France, he was set upon by a host of Normans bent on revenge. Sword in hand, he killed sixteen men before he himself was slain. Such is the stuff of legend! But Hereward the Wake has found a place in English literature. He is the hero in an historical novel, written by the English writer Charles Kingsley in 1866.