xxxxxAnotherxmajor centre of higher learning in the United States is Yale University in New Haven, Connecticut. This began as a Collegiate School at Killingworth in 1701, and was moved to New Haven in 1717. The following year it was renamed Yale College in honour of a wealthy Welsh merchant named Elihu Yale who had donated a great deal of money to the school. In its early days there was much emphasis upon the teaching of classical studies and upon Puritan values. 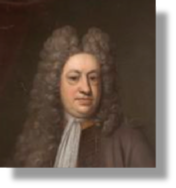 xxxxxElihu Yale (1649-1721) was a Bostonian by birth, but was taken to England by his family at the age of three. After a private education in London, he joined the East India Company, and worked his way up to become governor of Fort St. George in Madras in 1687. Five years later, however, he was dismissed, charged with trading in private at the company's expense. He was obliged to pay a fine but, nevertheless, returned home in 1699 with a large fortune. 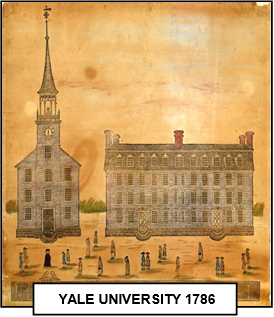 xxxxxIn London he worked in the diamond trade, but he also devoted some of his time to good works. With that in mind, he was approached by the London agent for Connecticut who asked him if he would assist a small collegiate school at Saybrook. Yale gave a gift of books, but later, in 1718, when it was suggested that a further donation would be likely to ensure that the school, now in New Haven, would be named after him, Yale was more generous. The variety of gifts he sent (including a valuable portrait of George I) were sold for a sizeable sum, and Yale College - later raised to University status - became a reality. But Elihu Yale never saw the product of his generosity; in fact he never ever returned to North America, the land of his birth. He died in 1721 and was buried at Wrexham, North Wales.

xxxxxYale is another major university in the United States. It began as a Collegiate School at Killingworth in 1701, and moved to New Haven, Connecticut, in 1717. A year later it was renamed Yale in honour of the English merchant Elihu Yale. He was born in Boston, but taken to England at the age of three. He worked for many years with the English East India Company and, having retired in 1699 with a large fortune, then made more money in the diamond trade. Asked for help by the school at New Haven, he gave generously both in money and gifts, and this enabled the school to gain college and then university status. Yale himself, however, never returned to North America.

xxxxxHarvard University was founded as a school at New Towne, Massachusetts in 1636, and three years later was named Harvard in honour of John Harvard, a Puritan minister who had bequeathed half his estate and his library to the school. He had attended Cambridge University in England so, later, New Towne was renamed Cambridge. Today, Harvard is one of the finest universities in the United States. 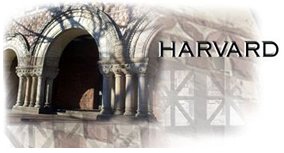 xxxxxHarvard University, the oldest educational institution for higher learning in the United States, was first founded as a school at New Towne, Massachusetts in 1636. In 1639 it was named Harvard in honour of John Harvard, an English Puritan minister who, in the previous year, had bequeathed half his estate and his library to the school. The name New Towne was later changed to Cambridge - Harvard having attended Cambridge University in England - and the school became a college and, later, a University. In the 18th century the University erected a granite monument in memory of John Harvard, and a seated statue of him was presented to the University.

xxxxxJohn Harvard (1607-1638) was born London. In 1625 his father and most of his brothers and sisters died of the plague. His mother then remarried, and he was sent to Emmanuel College, Cambridge, where he graduated in 1631 and received a master's degree in 1635. He married in 1637 and then sailed for New England, where he served as assistant pastor of the First Church of Charleston (now part of Boston). In less than a year, however, he died of tuberculosis.

xxxxxSurprisingly, he left an estate of about £1,600, mostly made up of property inherited in England. In his will he bequeathed half this sum to a school recently opened in neighbouring New Towne, together with his library, some 300 volumes on classical and theological subjects. Such a handsome gift ensured the school's survival, and in 1639 the Massachusetts General Court decreed that the school should be named Harvard in gratitude to its benefactor. Today, Harvard is recognised as one of the finest Universities in the United States, and a world centre for research. Its library now contains over ten million books!