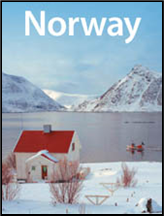 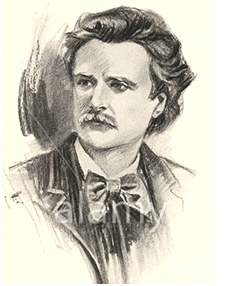 xxxxxNorway’s greatest composer Edvard Grieg was born in the coastal town of Bergen, and until the age of 15 was taught to play the piano by his mother, an accomplished pianist. It was then that the famous violinist Ole Bull, a friend of the family and a fervent nationalist, recommended that he study at the Leipzig Conservatory in Germany. He began his studies there in 1858, and after completing the course in 1862 he returned to Norway for a short while, during which time he gave a number of piano recitals. In 1863, however, in order to advance his career, he went to live in Copenhagen, Denmark, and this opened a new and significant phase in his life.

xxxxxUpxto this time his compositions had been in the style of the early romantic school, notably that of Schumann, Mendelssohn and Chopin, but in Copenhagen he became friendly with Richard Nordraak (1842-1866), a composer who was already writing work based on Norwegian folk music. It was he - and the earlier influence exerted by Ole Bull - that inspired the young Grieg to turn his attention to Norwegian nationalism. In 1864 he decided to devote his musical career to capturing the spirit and the beauty of his native land as seen through its folk songs and dance. He set out to create a new, distinctly Norwegian musical style at the very time when Norway was seeking to gain its independence from Sweden and reassert its own national identity. And it was during his three years in Copenhagen that he met and became engaged to his cousin Nina Hagerup, a distinguished soprano whom he married three years later and who, over the years to come, was to give the first performances of many of his songs.

xxxxxHe returned to Norway in 1866 and for the next ten years lived in Oslo (then called Christiania), composing, teaching music and giving concerts. He quickly came to prominence. In the year of his return, indeed, he conducted a highly successful concert, and this led to his appointment as conductor of the Philharmonic Society. The following year - his talent now widely recognised - he played a part in the founding of the Norwegian Academy of Music. 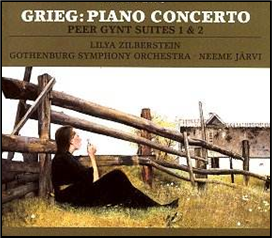 xxxxxIt was in 1868 while on holiday in Denmark that Grieg wrote his Piano Concerto in A minor, a musical form probably inspired by his listening to Robert Schumann’s piano concerto when at Leipzig. The first performance was given at Copenhagen in April of the following year. It was well received and it has since become one of the most popular and most performed works in the world. But real fame did not come until the 1870s. In 1874 he was given an annual grant by the Norwegian government and this enabled him to give all his time over to composition. One result of this was an invitation by the Norwegian playwright Henrik Ibsen to compose the incidental music for his poetic drama Peer Gynt. Given its first performance in February 1876 (including In the Hall of the Mountain King), its haunting, captivating melodies, centred around ugly trolls and grotesque beasts, secured his reputation not only in Scandinavia, where he was hailed as the leading composer of the day, but also in music circles across the world. 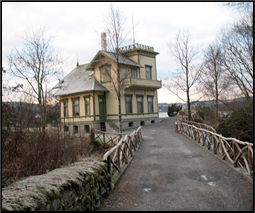 xxxxxIn 1877 he moved to a small, isolated studio at Lofthus in the beautiful area of Hardanger, but took up residence at Bergen in 1880 to become the director of the Philharmonic Orchestra. In 1885 he built Troldhaugen (Hill of the Trolls) (illustrated), a Swiss-style villa beside Lake Nordaas, just a few miles south of Bergen, and it was here that he spent the rest of his life. His Wedding Day at Troldhaugen, composed in 1892, was written for Nina to mark their 25th Wedding anniversary.

xxxxxGrieg travelled extensively throughout his career during which time he met up with some of the most celebrated composers of his day. The Hungarian Franz Liszt, whom he met in Rome in 1870, was impressed with his work and procured for him a travel grant from the Norwegian government; the Russian Pyotr Tchaikovsky spoke of the warmth and originality of his compositions; and he became a close friend of the Frenchman Claude Debussy. His gruelling programme of concerts, particularly in the 1880s, took him all over Europe. During the last year of his life he visited Berlin and Kiel, and was due to visit England when he died in September 1907. 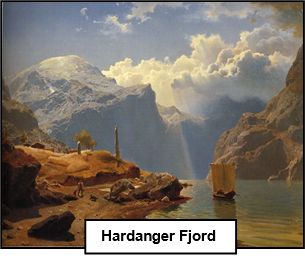 xxxxxGrieg was a “miniaturist” in the sense that he specialised in the short forms of music such as piano pieces, chamber music, dances and songs. That is where his strength lay. Slight in stature and soft by nature, he was not a man for towering symphonies, concertos or operas. And his immense talent lay in the original and lyrical way in which he weaved these small-scale compositions around Norwegian folk music and dance and, by so doing, captured in haunting, flowing melody the folk lore and the natural beauty of his homeland. Norway’s majestic mountains, sparkling fjords and stunning woodland (illustrated) are for ever reflected in his graceful, charming music. It was little wonder that for most of his career he rode on a wave of nationalism and was loved and admired wherever he went. 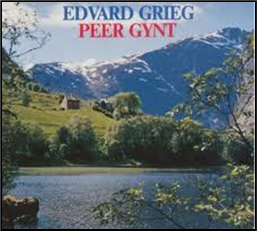 xxxxxApartxfrom his piano concerto of 1869, and his incidental music to Peer Gynt in 1875, - a wonderful expression of the love for his homeland - his best known works are the ten books of Lyrical Pieces for piano (completed in 1901 and including The March of the Trolls), the Holberg Suite for strings of 1884 - composed in honour of the Danish-Norwegian 18th century playwright Ludwig Holberg (1684-1754) - and the lovely Ballade in G minor. But not to be overlooked are his many arrangements of songs and dances which, perhaps more than any of his other works, capture the folk lore of his people. In addition, his chamber music includes three sonatas for violin and piano, and a sonata for cello and piano. For his contribution to music - which included his ability as a world-class conductor - he was elected to the French Academy of Arts and awarded honorary doctorates by both Cambridge and Oxford Universities.

xxxxxFollowing his death in September 1907, at the age of 64, over 30,000 people thronged the narrow streets of Bergen to witness his funeral. His ashes - and, later, those of his wife - were entombed in a mountain crypt near his villa. Today his house at Troldhaugen and the cabin where he used to work are open to the public, and there is now a museum dedicated to his life, together with a small concert hall.

xxxxxIncidentally, Grieg never enjoyed good health. He had a serious attack of pleurisy in 1860 and this left him with breathing problems for the rest of his life. Even so he continued his concert tours almost to the day of his death. He lost his only child, a little girl aged 13 months, in 1869, and both his parents died in 1875. ……

xxxxx…… His family originated from Scotland and his name was then spelled Greig. His great grandfather left Aberdeen after the Battle of Culloden in 1746, and after a period of travel settled in Norway around 1770, going into business at Bergen. ……

xxxxx…… Among Grieg’s many awards was an honorary doctorate of music from Cambridge University in 1894. Attending the ceremony for the same award were the composers Pyotr Tchaikovsky and Camille Saint-Saëns. But although his music was immensely popular, there was a handful of critics who considered his works too lightweight. The French composer Claude Debussy, for example, described his music as “the taste of a pink sweetie stuffed with snow”! 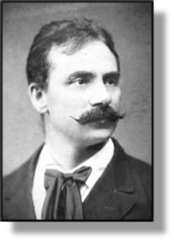 xxxxxA close friend of Edvard Grieg - and at one time the German composer Richard Wagner - was the Norwegian composer, conductor and violinist Johan Svendsen (1840-1911). As a child he was taught the violin and the clarinet by his father, a music teacher, and on leaving school he worked as an orchestral musician. After studying at Leipzig Conservatory he turned to conducting, and was conductor of the Musical Society Concerts in Christiania (Oslo) during the 1870s. In 1883, after spending time in Germany, Italy, England and France, he became conductor of Copenhagen’s Royal Opera House - a prestigious appointment - and he then remained in Denmark for the rest of his life. He is especially remembered for his Romance for Violin and Orchestra of 1881, but his works included two symphonies, a violin concerto, and a number of Norwegian Rhapsodies.

xxxxxIncidentally, he married in 1871, but his marriage was not a success. In 1883, in a fit of anger, his wife threw his only copy of his third symphony into the fire, an incident which was used by the Norwegian playwright Henrik Ibsen in his tragedy Hedda Gabler of 1890. 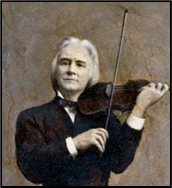 xxxxxLike Edvard Grieg, the famous violinist Ole Bull (1810-1880) was born in Bergen. A colourful, larger-than-life character with a great love of his homeland, he showed extraordinary talent as a violinist when a small child, and was playing in the town orchestra at the age of eight. While in Paris in 1831 he heard Niccolo Paganini play, and this inspired him to concentrate on solo performances. Four years late he played with the orchestra of the Paris Opera House, and this set him on the road to success. His superb skill and showmanship soon won him admiring audiences all across Europe and the United States. Such was the quality and exuberance of his performance that he came to be known as the “Nordic Paganini”, though he was never in the same class as the great Italian virtuoso. 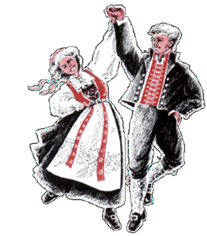 xxxxxA fervent nationalist, Bull included Norwegian folk tunes in all his concert tours, and at Bergen in 1850 he took part in the founding of a theatre in which, for the first time, actors spoke in Norwegian (instead of Danish). In 1853, during one of his five visits to the United States, he purchased a vast tract of land in Pennsylvania with the idea of setting up a colony for his countrymen - based on socialist ideals - but this never came to fruition.

xxxxxAt home and during his travels he came to know a large number of the celebrities of the day. In Norway he befriended the playwright Henrik Ibsen, giving him a start in theatre management, and, as we have seen, he played an important part in persuading the young Edvard Grieg to concentrate his efforts on the establishment of a national music based on the country’s folk songs and dances. Among his acquaintances and friends further afield were the composers Schumann, Liszt and Wagner, the poet Longfellow and the writer Hans Christian Andersen.

xxxxxIn 1872 he had a grand villa built on the island of Osteroen, a few miles from Bergen, and it was there that he died in August 1880.

xxxxxNorway’s greatest composer Edvard Grieg studied at the Leipzig Conservatory in Germany and then spent three years teaching and composing in Copenhagen. There he met the Norwegian composer Richard Nordraak and under his influence, together with that of the violinist Ole Bull, he resolved to devote his musical career to capture the beauty and the spirit of his native land as seen through its folk songs and dances. His major works in this respect included the incidental music to Peer Gynt (the poetic drama by Henrik Ibsen) produced in 1876, his ten books of Lyrical Pieces for the piano, and a large number of songs and dances. In these and other works he captured in haunting, flowing melody the folk lore and the natural beauty of his homeland. After working in Copenhagen, he returned to Norway in 1866 and lived the rest of his life in or near Bergen. He was regarded as the leading composer in Scandinavia, and his extensive concert tours earned him international fame. He is best remembered today for his Piano Concerto in A minor, first performed in 1869, and his Peer Gynt, composed in 1875. His music did much to emphasise the identity of his homeland at a time when it was seeking independence from its neighbour Sweden.