xxxxxIt was in January 1848, in the foothills of the Sierra Nevada in central

California, that gold was discovered in large quantities, and the world’s first gold

was having a sawmill built at Coloma, and it was then that John Marshall, a

carpenter working on the site, found a quantity of gold nuggets in the nearby

American River. The two men agreed to become partners and share the

find, but word soon got out, and within a matter of months thousands

of would-be prospectors had arrived in the area, living rough in tents and primitive

shacks in the hope of making their fortunes. By the following year, some 80,000 aptly named “forty-niners” had swarmed into California in search of gold. They came by sea via the port of San Francisco, braved the hazardous overland route across the arid Great 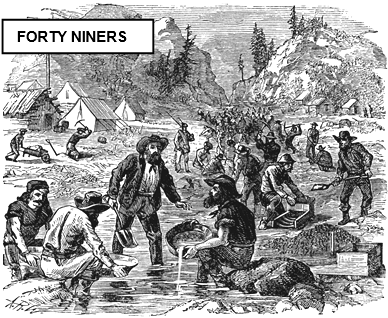 Basin, or made the treacherous journey northwards through Mexico. In addition to American immigrants, many were from Australia and the countries of Europe and South America.

xxxxxSome of the first arrivals did make sizeable fortunes, but given the vast number of individual miners working the sites, and the inevitable introduction of machinery - brought in by big business - the most accessible deposits - dust, flakes and nuggets from the beds of streams and rivers - were soon exhausted, and hardship followed on a large scale. The sprawling, primitive mining camps rapidly became centres of unemployment, crime and violence. Some did develop into permanent settlements and managed to establish a degree of law and order, but many slowly dwindled in size and eventually ended up as abandoned “ghost towns”, still to be seen today. Meanwhile the nearby coastal villages of San Francisco and Los Angeles, suddenly favoured by a massive increase in trade, quickly grew into sprawling cities where the gun ruled the streets and vice flourished in all its forms.

xxxxxIncidentally, John Sutter made nothing out of the gold found on his land. The fortune hunters quickly overran his estate, destroying his property and stealing his livestock, and he and his wife were obliged to move east. There he was declared bankrupt, and spent the rest of his life vainly trying to get compensation via Congress. However, before leaving California he did manage to hand over his land to his sons, and in 1848 they laid out the beginnings of the present city of Sacramento, naming it after the river of that name. …… 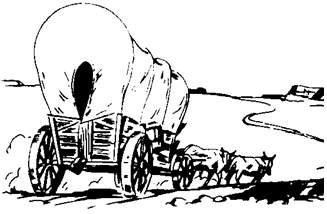 xxxxx…… The enormous influx of people into California in the late 1840s - 6,000 wagons arrived in one year alone! - alarmed the Indian population and resulted in conflict. An Indian war broke out in 1850 and sporadic fighting continued for the next forty years. It was during this period that General George Custer was defeated by the Sioux at Little Bighorn, Montana, in 1876 (Vb). The final conquest of the North American Indian took place at Wounded Knee in 1890 (Vc) when U.S. troops massacred more than 150 Sioux, many of them women and children. ……

xxxxx…… Gold was also found in other areas of the United States during this period. In 1859, for example, Central City in Colorado became known as “the richest square mile on earth” and a year later Idaho City developed into one of the earliest boomtowns. However, as we shall see, the next big find, centred around Anvil Creek in western Alaska, did not occur until the end of the century.

xxxxxIt was in January 1848 that gold was discovered at Sutter’s Mill at Coloma in central California. Within months thousands of hunters had arrived in the area, and by the following year some 80,000 aptly named “forty-niners” had set-up make-shift homes. They came by land and sea, and many made the journey from Australia and the countries of Europe and South America. When the deposits were exhausted, however, the primitive mining camps became centres of unemployment, crime and violence. Some survived and achieved a degree of law and order, but many others became abandoned “ghost towns”. The local centres of San Francisco and Los Angeles, however, prospered by the increased trade, and developed into large, important cities. As might be expected, the massive increase in the population of the area led to conflict with the local Indians, and sporadic fighting broke out over the next forty years. It was during this period that General George Custer was defeated by the Sioux at Little Bighorn, Montana, in 1876 (Vb) and the North American Indian was finally subdued following the massacre of some 150 Sioux at Wounded Knee in 1890 (Vc).

xxxxxIn 1851 gold was discovered around the towns of Ballarat and Bendigo in southern Australia and thousands of would-be prospectors flooded into the area. As a result, Melbourne developed into a major city, and by 1860 nearly half of Australia’s population was living in the state of Victoria. It was during this gold rush that some 150 diggers (gold miners) took up arms against the government, protesting against restrictions imposed on their search, and demanding the right to vote. They held out in a wooden stockade in the Eureka goldfield, but were quickly defeated by the state police and about 30 were killed. The thirteen ring leaders were charged with treason, but all were acquitted, and the incident, known as the Eureka Stockade, proved a landmark on the road to Australian democracy. 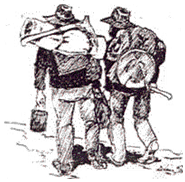 xxxxxThe discovery of gold in California in 1848 triggered off gold rushes in other parts of the world. The next to take place was in southern Australia. In 1851 gold was found at Warrandyte, some sixteen miles from Melbourne, and soon afterwards even richer deposits were discovered centred around the towns of Ballarat and Bendigo. Vast numbers of diggers from all over the colony were soon arriving in the region, and these were joined by some 200,000 immigrants from the mother country Britain, and about 25,000 from China. As a result, the population of the once small coastal town of Melbourne had more than trebled within two years, and by 186 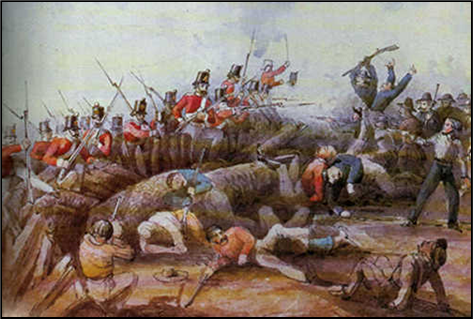 0 well over 500,000 people were living in the state of Victoria, nearly half the country’s total population.

xxxxxAs noted earlier, it was during this gold rush that some 150 “diggers” (goldminers) took up arms in protest against restrictions imposed on their right to search, and their lack of both the vote and political representation. When state troops arrived in November 1854, the diggers constructed a wooden stockade in the Eureka goldfield, but it was quickly overrun and about 30 of them were killed. However, the thirteen leaders who were charged with treason were acquitted, and the incident, known as the Eureka Stockade, came to be seen as the first landmark on the road towards Australian democracy.

xxxxxIncidentally, the gold found in Australia, in the south and later elsewhere, was usually in the form of nuggets. Some of these were extremely large and valuable. The biggest one was found at Hill End in 1872 by a German migrant named Bernard Holtermann (here seen with his find). The so-called “Holtermann Nugget”, measuring 1.5 metres long and weighing almost 290kg, remains the largest single mass of gold ever discovered.

xxxxxIn 1853 gold was also discovered in South Africa, when a prospector named Pieter Marais discovered alluvial gold in the Jukskei River, just north of what was to be Johannesburg. As we shall see, this city started off as a boomtown in 1886 (Vc) following a substantial find of gold in the Rand 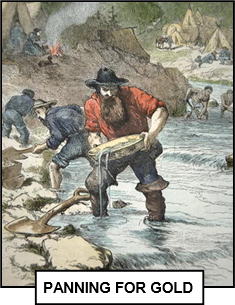 district of the Transvaal.

xxxxxLikewise in Canada, a gold strike in 1858 in the lower Fraser River in British Columbia, and the Cariboo gold rush further up the river in 1862, was followed - as we shall see - by a much larger find at Bonanza Creek in Klondike Valley, close to the end of the century.

xxxxxThe discovery of alluvial gold in New Zealand, first in the Otago region in 1861 and then on the west coast, brought unexpected prosperity to the South Island, and a large increase in the influx of immigrants. After the deposits were exhausted, many of the newcomers stayed on and took up farming.

xxxxxAs we shall see, another series of major gold rushes occurred towards the end of the century, beginning with the Witwatersrand Gold Rush in South Africa in 1886 (Vc), and culminating in a stampede for gold in the Klondike fields of the Yukon and Anvil Creek in Alaska. 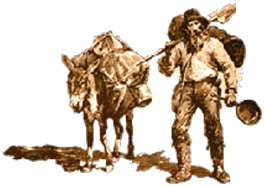