xxxxxThe Globe Theatre was built in 1599 by the Burbage brothers. Situated on the southern bank of the Thames in Southwark, it was octagonal in shape and, apart from three galleries, was open to the sky. The stage itself stuck out into the inner pit where the “groundling spectators” stood and made their own contributions to the production! There was no scenery, but use was made of props and wires, and trapdoors were provided for special effects. In 1613 a cannon used in a performance of Henry VIII misfired and caught fire to the building. It was rebuilt the following year, but pulled down thirty years later at a time when the Puritans had closed all the theatres. The Globe Theatre was one of many. By 1600 there were about eight playhouses in London. The first one was The Theatre, built at Shoreditch in 1576. When its lease expired in 1598, it was dismantled and taken to Bankside for the building of the Globe. 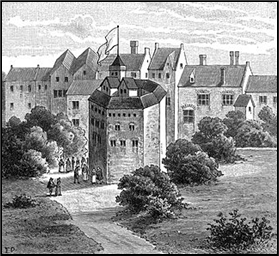 xxxxxThexrenowned Globe Theatre, where many of Shakespeare's plays were first performed (and later those of Ben Jonson, Beaumont and Fletcher), was built in 1599 by the Burbage brothers, Richard and Cuthbert, on the southern bank of the Thames in the London district of Southwark. It was thought to be octagonal in shape and, apart from three galleries, the top one of which had a thatched roof, was open to the sky. The stage itself projected outwards into the inner pit where the less well-off members of the audience stood. Known as "groundling spectators", they would often shout out their comments to the actors or join in the production! 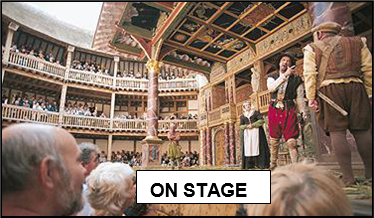 xxxxxPerformances were usually held in the afternoon. A raised flag informed the public that the theatre was open, and three blasts on a trumpet signalled the beginning of the play. There was no scenery, but props were used - sometimes elaborate ones - and there were trapdoors and overhead wires to provide special effects. In 1613, however, all this came to an end. During a performance of Shakespeare's Henry VIII, a cannon fired to heighten the dramatic effect as the "King" made his entrance, did a little more than that. It set fire to the thatched roof and the timber building was destroyed in less than an hour! It was rebuilt the following year, but was pulled down thirty years later, two years after the Puritans closed all theatres.

xxxxxFamous though it deserves to be, the Globe Theatre was built only four years before the end of the Elizabethan period, and was by no means the first in London. Indeed, by 1600 it is said that there were eight playhouses in the capital. Itxwas the actor and theatre manager James Burbage (1531-1597), the father of Richard and Cuthbert, who in 1576 obtained a 21 year lease on a patch of land in Shoreditch, London, and used it to build The Theatre, the first English playhouse. The theatrical company known as The Chamberlain's Men (later the King's Men), formed in 1594, gave performances at this playhouse until it was closed down in 1598 following the expiry of the lease. It was dismantled and taken to Bankside for the building of the Globe Theatre.

xxxxxIncidentally, in October 1989 the site of the Globe Theatre was rediscovered and planning permission was granted to the American film producer, Sam Wanamaker, to build a replica of the playhouse where it once stood. The new "Globe Theatre" was opened to the public in 1995, but unfortunately Sam Wanamaker did not see its completion, having died in 1993. The thatched roof in its construction was the first to be built in the city of London since the Great Fire of 1666. Replicas of the Globe Theatre have been constructed in Odessa, Texas, and in San Diego, California. …… 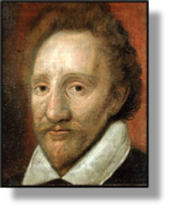 xxxxx…… Richard Burbage (c1567-1619), apart from being part owner of the Globe Theatre, was also one of the leading actors of the day. Being among the first to act Shakespeare, he created many of his tragic roles, including Hamlet, Lear, Othello, Macbeth and, of course, Richard III. He also took part in plays by other leading dramatists, such as Thomas Kyd and Ben Jonson, and he performed at the Blackfriars private theatre from 1608. In great demand as an actor, he is regarded today as the first great performer on the English stage.