xxxxxThe father of Italian painting, Giovanni Cimabue, was probably born in Florence and almost certainly studied or worked in Pisa and Rome. His fame rests on the fact that he broke away from the formalised style of Byzantine art, retaining the golden background, but introducing a more natural treatment of the traditional subject. He produced his masterpiece Maestà (Madonna and Child Enthroned) around 1285, now in the Uffizi Gallery, Florence, and contributed to frescoes in the church of St. Francis of Assisi. An earlier Maestà, produced in about 1270, is now in the Louvre in Paris. The more famous Italian artist Giotto continued this movement towards realism, and might well have been one of Cimabue’s pupils. 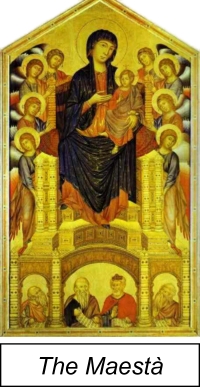 xxxxxGiovanni Cimabue, regarded traditionally as the father of Italian painting, is believed to have been born in Florence around the year 1240. Details of his life are sketchy, but it is known that his real name was Cenni di Pepi and that he studied or worked in Florence, Pisa and Rome. He achieved fame in his lifetime, mainly because he broke away from the formal style of Byzantine art, predominant in the Italy of his time. Whilst retaining the golden background so typical of that style, he introduced a more natural, life-like treatment of the traditional subjects. In this respect, his work anticipates the realistic school founded by Giotto in the early Renaissance period, and it might well be that he was teacher to this more famous Italian artist. At his death in 1302 he was buried in the cathedral at Florence.

xxxxxThere is a question mark over some of the works once attributed to him, but it is almost certain that he produced the Maestà or Madonna and Child Enthroned in about 1285 (here illustrated and now in the Uffizi Gallery in Florence); his earlier Maestà, produced around 1270, (now in the Louvre, Paris); the mosaic figure of St. John in Pisa Cathedral; and - aided by assistants - some frescoes in the church of St. Francis of Assisi.

xxxxxIllustrated below are works attributed to him (left to right): St. Francis of Assisi, a detail from one of his Crucifixions, The Madonna in Majesty, and Apocalyptical Christ.