xxxxxAs we have seen, the Treaty of Utrecht of 1713 (AN) attempted to resolve the colonial disputes in North America, but the ill-defined borders between the French, British and Spanish possessions led to constant skirmishes. In 1733 Britain, seeking to strengthen her southern front, founded the colony of Georgia. The English philanthropist James Oglethorpe established the first settlement at Savannah on land purchased from the Indians. He then built up an efficient military force, and this proved successful in defending the southern border against the Spanish. However, autocratic as a leader, he was accused of maladministration, and in 1743 was recalled to England. By now, the constant border clashes and growing rivalry over lands further inland, made war inevitable. As we shall see, the following year, 1744, the King George's War broke out, a spin off from the War of the Austrian Succession in Europe.

xxxxxAs we have seen, in 1713 (AN) the Treaty of Utrecht made an attempt at resolving the colonial clashes of interest in North America. Spain retained Florida, and the French kept Cape Breton Island, whilst the British gained Acadia - later named Nova Scotia - as well as Newfoundland and the Hudson Bay territory. But the ill-defined boundaries between the colonial powers continued to be a cause of constant disputes and bloody skirmishes, particularly between the French and British, each side assisted by local Indian tribes. 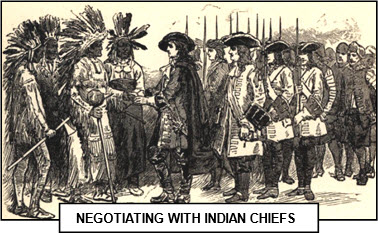 xxxxxIn 1733, Britain, seeking to strengthen the southern flank of her colonies along the Atlantic seaboard, founded the new colony of Georgia, named after the king. The thirteenth and, as it turned out, the last of these colonial states, it was seen as a buffer region between the Spanish to the south in Florida and the French to the west in Louisiana. A charter having been granted to the English philanthropist James Oglethorpe (illustrated above), he landed with 100 colonists and established the first settlement at Savannah on land purchased from the Indians. 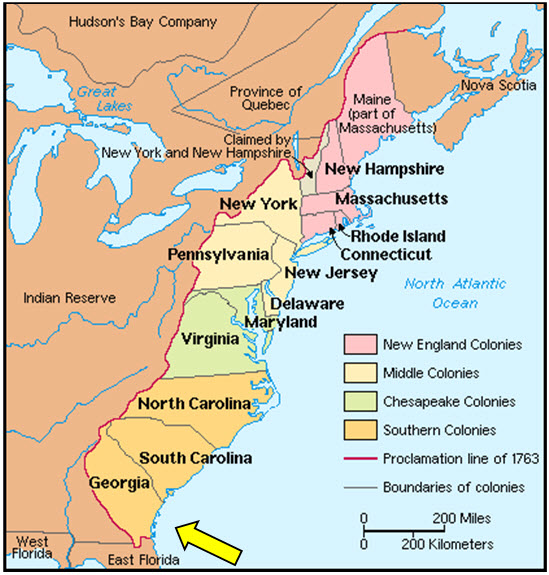 xxxxxA former general, he then spent the next ten years building up a military force capable of defending the southern border against the Spanish, and this served the colony well when a Spanish invasion force was defeated at the Battle of Bloody Marsh in 1742. However, his high-handed rule of the colony brought charges of mal-administration, and the following year he was recalled to England. He never returned to Georgia. A board of trustees continued to administer the colony - which was ostensibly established to provide a home for the poor of England - and this passed control of the colony over to the government in 1752. Economic growth was slow to begin with, but increased considerably as from the 1760s.

xxxxxGiven the constant border clashes, experienced by the thirteen colonies -particularly those in the extreme north - and the determined attempt by both the French and British colonists to expand into the region of the Great Lakes and the Ohio valley, war was inevitable. In 1744, as we shall see, it broke out in earnest as a spin-off from the European struggle known as the War of the Austrian Succession. Called King George's War, it was to be fairly bloody, fa 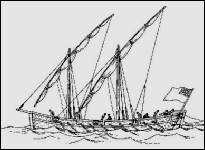 irly long, and solve virtually nothing.

xxxxxIncidentally, in 1740 Oglethorpe organised his own colonial "navy" to help the Royal Navy in its work of preventing Spanish privateers from attacking shipping off the coast of Georgia. His three vessels, one illustrated here, proved ideal for patrolling the coastal waters. ……

xxxxx…… The three founder members of Methodism, the brothers John and Charles Wesley and George Whitefield, visited the colony in 1735. Charles Wesley returned home after two months or so, unable to withstand the climate, but his brother remained in America for two years. George Whitefield returned in 1738, but he made six more visits to the British colonies during his lifetime.