xxxxxThe Franco-Prussian War was engineered by the German prime minister Otto von Bismarck in the belief that such a conflict would serve to unite the German states and create a German Empire (under Prussian leadership) that was the most powerful nation on the European continent. He achieved his aim by taking advantage of the situation in Spain at the time, wherein Queen Isabella II had been deposed and there was a need to find a constitutional monarch. Bismarck supported a German candidate and this provoked Napoleon III of France into taking up arms against Prussia. The French emperor was totally opposed to the idea of a German sitting on the Spanish throne, and demanded not only the withdrawal of this candidate but also an undertaking that, in the future, the Prussians would never support such a candidate. The Kaiser, Wilhelm I, in an informal meeting with the French ambassador to Prussia, held at Ems in July 1870, would give no such undertaking, however, and when Bismarck received an account of this meeting (the Ems telegram) he sent a “doctored” version to the Press giving the impression that each had insulted the other. As a result Napoleon declared war on Prussia but, in the event, his troops proved no match for the highly trained Prussian army. Quickly mobilised, it poured into France and won a decisive victory at the Battle of Sedan. Napoleon was captured, the French Empire collapsed, and the German Empire was created. The French fought on as a republic but, as we shall see, Paris was forced to surrender in January 1871, and the war was brought to an end by the Treaty of Frankfurt three months later. This new balance of power on the Continent was destined to cause growing tension between the major European powers.

xxxxxThe Franco-Prussian War, engineered by the German prime minister Otto Von Bismarck (as in the case of the Austro-Prussian War of 1866) had far reaching effects not only in Europe but in the world at large. Its outcome, the establishment of the German Empire and the overthrow of Napoleon III and his French Empire, destroyed the balance of power that had been established at the Congress of Vienna fifty years earlier, and marked the beginning of forty years of growing tension between the major powers of Europe, a period which culminated in the outbreak of the First World War in 1914. 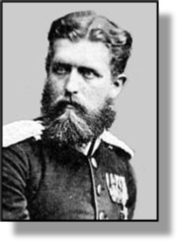 xxxxxOstensibly, as we have seen, the cause of the conflict had its roots in the Third Carlist War in Spain. With the deposition of Isabella II in 1868 there was need for a constitutional monarch, and Bismarck, seizing the opportunity, gave his full support to a German candidate, Prince Leopold of Hohenzollern-Sigmaringen (illustrated). Anxious to wage a war with France as a means of uniting all the German states and gaining ascendancy in Europe, the German prime minister reckoned that this might well provoke Napoleon III to take up arms. He reckoned correctly. The French Emperor was totally opposed to the idea of a German sitting on the Spanish throne (understandably), and rejected the proposal out of hand. When, at the beginning of July, he received news that Prince Leopold had accepted the Spanish throne, he sent an ultimatum to Prussia demanding that the acceptance be withdrawn.

xxxxxIn view of the strength of opposition aroused in France, a few days later Leopold did in fact withdraw his acceptance, but then Napoleon, goaded by his government, went one step further. At an informal meeting on the 13th July, held at the Spa resort of Ems between the French ambassador in Prussia, Vincent Benedetti, and the Prussian Kaiser, Wilhelm I, he demanded a guarantee that no member of the Hohenzollern family would ever be a candidate for the Spanish throne. The Kaiser, firmly but politely, refused to give such an undertaking, and gave notice that he had nothing further to say to the ambassador and was not prepared to receive him again - presumably as far as that particular matter was concerned. 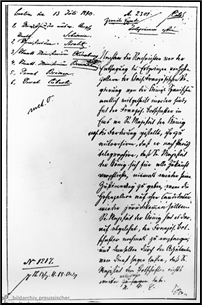 xxxxxA report of this meeting, the famous “Ems Telegraph” (or Despatch), was sent to Bismarck that evening, and this gave him the opportunity he was looking for. Before releasing an account of this informal discussion to the Press and foreign embassies, he slightly but craftily modified the wording so as to imply that both the ambassador and the Kaiser had insulted each other and that, as a consequence, diplomatic relations had been broken off. It was, as he later put it, “a red rag to the Gallic bull”. (“Doctored” account here illustrated). Napoleon, whose government had spoken earlier of being willing to take the appropriate action “without weakness or hesitation”, felt duly insulted, and France declared war on Prussia on the 19th July, 1870. Napoleon doubtless saw the war as a necessary opportunity to cut Prussia down to size but, in reality, quite the opposite transpired.

xxxxxThis declaration of war gave effect to Bismarck’s two major objectives. Firstly, the independent states of southern Germany, having no desire to support the French, threw in their lot with the North German Confederation, thereby anticipating the unification of Germany. Secondly, convinced that Prussia, assisted by the German states, was fully capable of overthrowing the French Empire (powerful though it was thought to be), he saw the war as means of establishing Germany, led by Prussia, as the dominant power in Europe. His confidence in the military strength of Prussia was not misplaced.

xxxxxUnderxthe direction of General Helmuth von Moltke (1800-1891), a disciple of Clausewitz, the Prussian army was highly trained, well motivated and, above all, capable of being fully operational in a matter of days, due in large measure to the use of railways. Elements of the General Staff had been especially trained in logistics to ensure the rapid deployment of troops and their concentration where strategy demanded. Thus whilst the bulk of the French regular forces - some 300,000 men - was still in the throes of mobilisation, three armies of the Prussian-led coalition poured across the border at Wissembourg and forced the French to retreat. After suffering a series of defeats, notably at Worth, Mars la Tour, and Gravelotte, one section fell back to Metz, where it was promptly besieged, and another, failing to relieve Metz, was driven northwards and, converging on the fortified town of Sedan, was quickly surrounded. 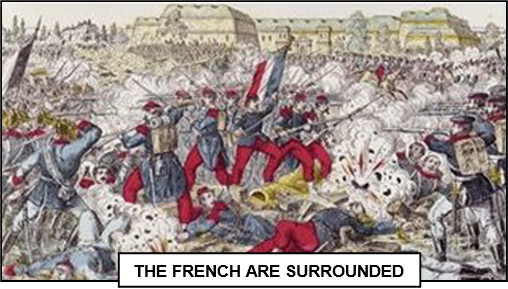 xxxxxThe Battle of Sedan, in which the French army was commanded by Napoleon III himself, proved the decisive engagement. The Prussians, having encircled the town with troops and artillery, attacked the French positions on the first day of September. The concentrated bombardment of their Krupp six pounders - efficient long-range breach-loading cannons with a rapid rate of fire - tore into the French lines, causing heavy casualties, especially among exposed troops to the north of the town. At one time the French field commander ordered a retreat, but his troops could not break through the Prussian cordon and were forced to stand and fight. They were eventually driven into the Bois de Garenne and, despite three desperate cavalry charges, they failed to break out. By evening the French position was hopeless and, to avoid further bloodshed, Emperor Napoleon ordered his army to surrender. Prussian casualties were put at about 9,000, but French loses were almost double that figure. In addition, over 21,000 men, including Napoleon, were taken prisoner. For the French it was a humiliating defeat and, not surprisingly, marked the downfall of the Emperor and the overthrow of the Second Empire. For Bismarck it was nothing short of a triumph. 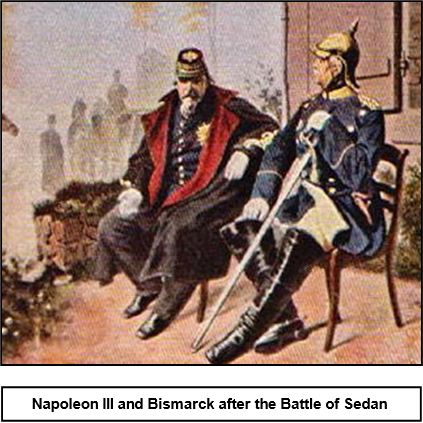 xxxxxAs noted earlier, on his release Napoleon III spent his last years with his wife and young son at Chislehurst in Kent, England, ever haunted by his military failure and the collapse of the country he had endeavoured to serve so well. He died in January 1873, and his final resting place was at the imperial crypt at St. Michael’s Abbey in Farnborough, Hampshire. In his early years as Emperor he did much to enhance the status of France both at home and internationally, but in the end he did bring about the total collapse of the nation in his charge, and that fact was never likely to be forgotten or forgiven.

xxxxxBut the outcome of the Battle of Sedan did not bring about an immediate cessation of hostilities. When news of the disaster reached Paris, republicans proclaimed the Third Republic, and a Government of National Defence was hurriedly established to defend the capital and continue the fight in the provinces. As we shall see, however, Paris was besieged and forced to surrender early in 1871 after a prolonged artillery bombardment, and French forces in the provinces, hastily assembled, proved no match for the Prussian army. Finally, in May a Commune, a revolutionary government set up in Paris in defiance of the peace settlement, was brought to a bloody end. All that remained was for the German Empire - born out of victory - to enjoy the kudos and reap the benefits of the Treaty of Frankfurt, signed in May 1871.

xxxxxIncidentally, in the war at sea the French fared no better. Their navy did attempt to blockade the North German coast, but, due to poor organisation, it did not prove very effective. Furthermore, a planned invasion of this coast line, to draw Prussian troops away from the invasion of France, had to be abandoned because the navy lacked the heavy weapons required to make a successful landing.

xxxxx…… The Franco-Prussian War may be seen as the first European War which had a number of technological innovations associated with modern warfare. For example, both sides made extensive use of rail transport and the electrical telegraph, and over sixty air balloons were used as a means of escape from the besieged city of Paris. On the battlefield itself the machine gun was making an appearance - the French mitrailleuse (illustrated) -, and both rifle and artillery were breech-loading, a facility which enabled sustained and concentrated firepower and was to result in a large increase in war casualties. ……

xxxxx…… As noted earlier, the French chemist and biologist Louis Pasteur - famous for proving the germ theory of disease - volunteered for service when the war broke, but his application was turned down because he had suffered a serious paralytic stroke two years earlier. So, as a means of protest, he returned the honorary medical degree he had received from the Prussian University of Bonn in 1868! ……

xxxxx…… In response to his country’s military defeat, the composer Charles Gounod composed Gallia, a lamentation for solo soprano, chorus and orchestra. It was first performed in 1871.

xxxxxAs we shall see, the Franco-Prussian War had repercussions elsewhere in Europe. In 1870, for example, the withdrawal of French troops from the Papal States in order to bolster home defence enabled Italian forces to occupy these states, complete the unification of Italy, and make Rome the country’s capital. At the same time Russia, taking advantage of the conflict in Western Europe, openly repudiated the naval terms of the Treaty of Paris of 1856 (Va) - which had put a limit on Russian naval strength in the Black Sea. Meanwhile in the United Kingdom, Queen Victoria’s family links with Prussia, stirred up a great deal of anti-monarchy feeling, fuelled by a wild rumour that the Prussians were planning an invasion of England!

The Battle of Sedan