xxxxxAs we have seen, it was in 1553 (E6) that three ships commanded by Sir Hugh Willoughby attempted to discover a north-east passage. Only one ship survived, captained by Richard Chancellor. He reached Archangel and then travelled overland to Moscow. It was in 1576 that the English navigator Martin Frobisher tried to find a north-west route via the Canadian Arctic. He reached Baffin Island, but the attempt failed, as did further expeditions in 1577 and 1578. In 1585 he went with Francis Drake to the West Indies to attack the Spanish, and three years later took a prominent part in defeating the Spanish Armada, but in 1594 he was mortally wounded while trying to relieve the fort of Crozon, near Brest. 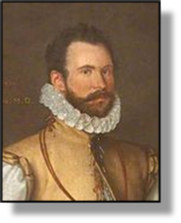 xxxxxAs we have seen, it was in 1553 (E6) that three ships under the command of Sir Hugh Willoughby set out to discover a north-east passage from Europe to the Far East. Only one survived the journey into the arctic, the Edward Bonaventure, captained by the expedition's chief pilot, Richard Chancellor. He managed to reach Archangel, but he then abandoned any hope of reaching the riches of the Orient, and travelled overland on a trade mission to Moscow.

xxxxxThe search for such a passage having proved unsuccessful, navigators and merchants now turned their attention to the possibility of a north-west route via today's Canadian Arctic. The first attempt by an English navigator was made by Martin Frobisher one of England's greatest seamen during the reign of Elizabeth I. 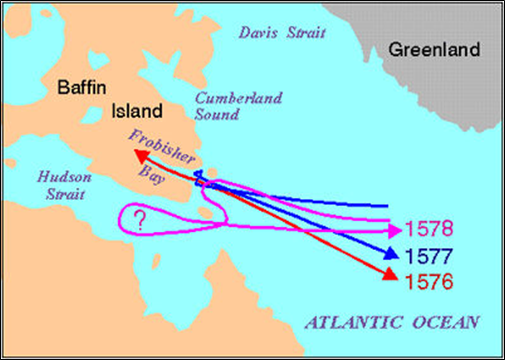 xxxxxFrobisher was a Yorkshireman by birth, but he spent his early years in London. In 1544 he went to sea as a cabin boy, and such was his skill and daring - at one time acting as an "approved" pirate against the French - that he rose quickly in the ranks and by 1565 was in command of his own ship. It was in 1576 that he was put in charge of an expedition to search for a north-west passage to the orient. He started out with three small ships, but only one, the Gabriel, reached Baffin Island. Here a large bay - later named Frobisher Bay - was thought to be the entrance to a north-west sea route, but no channel was found and the expedition returned empty handed save for one captured eskimo and some rock samples. With the prospect of gold in the offing, Frobisher then made two further voyages to Canada, in 1577 and 1578, this time financed by the Queen, but these were likewise unsuccessful. No passage was found to China, no land was found suitable for colonisation, and no precious minerals were discovered. We are told that on the last voyage he loaded up fourteen ships with ore, only to find on his return that all the cargoes were worthless!

xxxxxIn 1585, with the rank of vice-admiral, he joined Drake's expedition to the West Indies to attack the Spanish colonies there, and then three years later he played a prominent part in the defeat of the Spanish Armada and was knighted during this campaign. He then retired to Yorkshire but, missing the sea, soon returned to take on the Spanish again. In 1592 he took command of a fleet which had been fitted out by Sir Walter Raleigh to intercept Spanish merchant ships bringing gold back from Panama. It was whilst fighting against Spanish forces, attempting to relieve the fort of Crozon, near Brest, that he was mortally wounded. He died in November 1594 soon after returning to Plymouth. 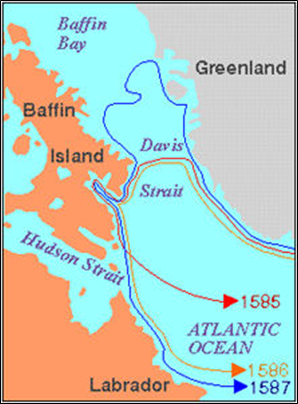 xxxxxAnother English navigator who explored the possibilities of a north-west passage at this time was John Davis (1550-1605). From 1585 to 1587, while Frobisher and Drake were attacking the Spanish in the West Indies, he made three voyages into the Arctic during which he explored the west coast of Greenland as far as Disko Island and passed through the strait which lies between Greenland and Baffin Island - later named after him. It appears that he struck up good relations with the Eskimos by taking musicians on the expedition to play dance music!

xxxxxHe commanded the Black Dog during the defeat of the Spanish Armada, and then in 1591 sailed with the English navigator Thomas Cavendish to the South Seas. It was during this voyage that, seeking a passage through the Strait of Magellan, he discovered the Falkland Islands in August 1592. He later sailed with Sir Walter Raleigh to Cadiz and the Azores, and also joined expeditions to the East Indies. It was during his third voyage to the Far East, while making for Sumatra, that he was killed by Japanese pirates off the coast of Singapore. 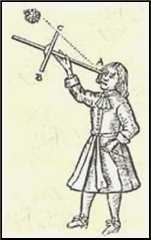 xxxxxAn accomplished sailor, Davis is also remembered for his writings on seamanship, and for his invention of a modified quadrant, a navigational instrument which bore his name and was still in use in the eighteenth century. It was known popularly as the "back-staff" (here illustrated) because, when calculating latitude by measuring the altitude of the polestar, it enabled the observer to stand with his back to the sun instead of looking directly into it, as was the case with the "cross-staff". His two major works were The Seaman's Secret, a treatise on navigation published in 1594, and his book The World's Hydrographical Description (1595) in which he wrote about the Northwest Passage.

xxxxxA further attempt to find a north-east passage was made by the Dutch navigator Willem Barents (c1550-1597). During three voyages from 1594 to 1597 he reached Novaya Zemlya in the extreme north- west corner of Russia, and re-discovered Bear Island and Spitsbergen. He was an accomplished seaman and made some accurate charting of the region. The Barents Sea and Island are named after him. His vessel became ice-bound on his last voyage, and he died trying to make for the mainland in a small boat. 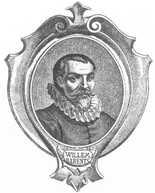 xxxxxMeanwhile, another attempt was made to find a north-east passage, this time by a Dutch navigator, Willem Barents (c1550-1597). He made three voyages of discovery over the years 1594 to 1597, and perished while trying to return from the last one. During these expeditions he reached the northern point of the archipelago Novaya Zemlya (in the extreme north-west corner of Russia) and re-discovered Bear Island and Spitsbergen (now Svalbord, meaning "cold coast"). 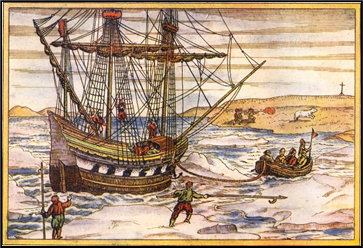 xxxxxDuring his final voyage his two ships became separated, and his own vessel became ice-bound and badly damaged (illustrated). He and his crew had to stay out the winter on one of the islands of Novaya Zemlya, building their "Ice Haven" out of driftwood. They coped well considering the bitter conditions, but when Spring came in 1597 and they made for the mainland in two open boats, Barents died soon after the start of the journey. Only thirteen of his crew members made it to the shores of Lapland and were rescued by the second vessel.

xxxxxBarents is the most famous of the early Arctic explorers. Not only did he sail deep into the area and suffer extreme hardship as a consequence, but he also carried out some accurate charting of the region and provided some very valuable data on the changing weather conditions. Later, the Barents Sea and Barents Island were named after him in recognition of his achievements. 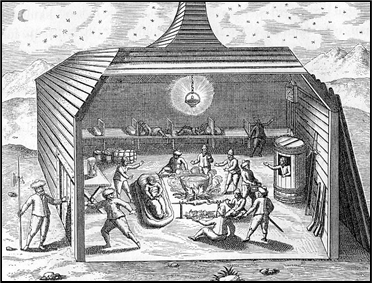 xxxxxIncidentally, Gerrit de Veer, one of the men who had survived the long winter with Barents and had returned safely, later wrote an account of these expeditions in a book entitled The Three Voyages of Willem Barents to the Arctic Regions, published in 1598. …… In 1871, Ice Haven, the makeshift hut in which Barents and his men had taken shelter in 1596, was found by a Norwegian whaler, and many of the articles discovered there are now preserved at The Hague. Illustrated here is an artist’s impression of their Het Behouden. In 1875 there was another find when a part of Barents' journal was discovered.

xxxxxIt was around this time that the English navigator John Davis (1550-1605) also looked for a north-west passage. He made three voyages into the Arctic from 1585-1587, and reached the strait which lies between Greenland and Baffin Bay (later named after him). He took part in the fight against the Spanish Armada and later, in 1592, discovered the Falkland Islands while making for the South Seas. It was during his third visit to the Far East that he was killed by Japanese pirates off the coast of Singapore. He invented an improved quadrant, produced a treatise on navigation, and wrote an account of his visits to the Arctic.