xxxxxIn France, the Protestant Reformation was begun by a group of humanists led by the theologian Lefèvre d'Étaples. As their ideas spread, persecution became severe. By 1545 some 3000 Huguenots had been put to death. Despite this, the number of converts continued to grow, and in 1562 a series of eight religious wars broke out, lasting for over 35 years. During this long period of bitter struggle, both sides called upon outside help, and both committed acts of barbarity. One of the worst atrocities was the Saint Bartholomew's Day Massacre of 1572. Eventually, in 1589 the leading Huguenot, Henry of Navarre, became king as Henry IV. The war continued, but in 1593 he adopted the Catholic faith and, after capturing Paris and gaining control of the country, issued the Edict of Nantes in 1598. This granted a good measure of religious freedom and civil rights to the Huguenots and brought peace to a war-torn nation. But, as we shall see, under Louis XIII, coming to the throne in 1614 (J1), this uneasy period of religious toleration was not to last very long. 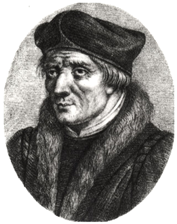 xxxxxAs we have seen (1517 H8), the rapid spread of the Protestant faith over many parts of western Europe following the Augsburg Confession of 1530 brought widespread unrest and, in some cases, open and bitter conflict. InxFrance, the Reformation was initiated by a group of humanists under the leadership of Lefèvre d'Étaples (c1455-1536) (here illustrated). For a while his ideas were tolerated and even embraced. Many intellectuals and members of the nobility accepted them, and his movement received royal protection. Persecution began in earnest, however, once the true motives of his work were realised.

xxxxxAt the beginning of the Reformation, many French Calvinists (known as Huguenots) fled to Switzerland, but the majority stayed on. By 1545, some 3,000 had been put to death for their faith, but their number continued to grow. In 1559 a synod held in Paris was attended by delegates from 66 Calvinist churches in France, and a confession of faith and a code of discipline were drawn up. At the next synod, held only two years later, more than 2,000 churches sent representatives! 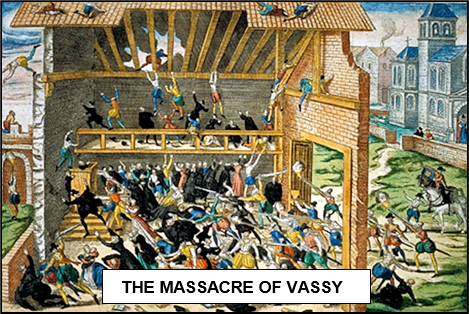 xxxxxThis alarming increase in the number of Huguenots deeply concerned the Roman Catholics, and In 1562 the fear and hatred between the two faiths boiled over when soldiers of Henry, Duke of Guise, the Catholic leader, murdered more than 60 Huguenots while they were holding a church service in a barn at Vassy in Normandy. This was the start of a series of religious wars - eight in all - which was to last until a settlement was reached over thirty years later in 1598. In this conflict of faiths, few holds were barred, and there were numerous acts of barbarity on both sides. The worst atrocity was the Saint Bartholomew's Day Massacre in August 1572, when, by a pre-arranged signal, thousands of Huguenots were slaughtered in Paris and throughout the provinces, including the Protestant leader, Admiral Gaspard de Coligny. Henry of Navarre (1553-1610), also a leading Huguenot, was spared, but only after he had accepted the Catholic faith. A fine soldier, he it was who, as King Henry IV, was eventually to bring peace to a war-torn France.

xxxxxThese religious conflicts amounted to nearly four decades of bloody battles and atrocities, punctuated by short periods of reconciliation, and a welter of enforced treaties, broken agreements and acts of outright treachery. During this long and bitter struggle, both sides called upon outside help, the Huguenots from Germany, England and Switzerland; the Catholics from Spain. The Huguenots were first led by Louis I de Bourbon, Prince of Condé (caught and murdered in 1569); then Admiral Gaspard de Coligny (killed in 1572); and finally Henry of Navarre. The major Catholic leaders were Henry Duc of Guise and Catherine de Medici, former wife of Henry II of France and mother of the young, mentally-retarded king, Charles IX. Later, King Henry III, yet another son of the redoubtable Catherine, led the Catholic cause. 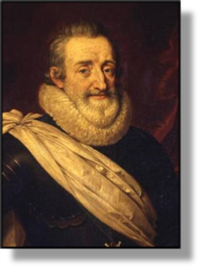 xxxxxIt was in the reign of Henry III, who had succeeded to the throne on the death of his brother Charles IX in 1574, that the last of the eight wars took place, known as the War of the Three Henrys. By now, Henry of Navarre (illustrated), had reaffirmed his protestant faith and was again leading the Huguenots. Inx1587 he won a resounding victory over the Roman Catholics at the Battle of Coutras, and the following year his cause was further assisted when Henry, Duke of Guise, turned traitor and, hoping to seize the throne, led an insurrection in Paris known as the "Day of the Barricades". The king, managing to escape, came to terms with him and then had him assassinated in the December! The following year, fate again favoured Henry of Navarre. The king, Henry III, having named him as his successor, was himself assassinated by a crazed Dominican friar. This put the leader of the Huguenots on the throne of France as Henry IV!

xxxxxAs one might expect, this turn of events greatly alarmed the Roman Catholics. War broke out once again and lasted for another five years. In 1593, in an attempt to end the warfare, Henry IV appeased his opponents by adopting once again the Catholic faith. This astute move brought him greater support, and in the following year he captured Paris - with the remark, so we are told, that Paris was worth a Mass! By 1598 he was in firm control, and it was then that he issued the Edict of Nantes in 1598. This gave the Huguenots a good measure of religious freedom and other civil rights, and thus brought to an end the French Wars of Religion.

xxxxxThe Edict of Nantes brought peace where there had been much conflict, but in the long term it provided but a truce, an uneasy period of religious toleration. Henry IV proved an able monarch and did much to assist France's recovery after the ravages of war, but, as we shall see, the coming to the throne of a powerful Catholic monarch, Louis XIII, in 1614 (J1) was to spell further trouble for the H 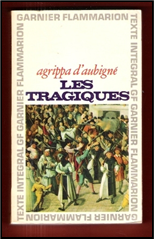 xxxxxIncidentally, the French poet Théodore-Agrippa d'Aubigné was a Huguenot soldier during these religious wars and served as master of horse to Henry of Navarre. With the coming of peace he published an eye-witness account of this conflict in his Histoire universelle. In his major poetical work, Les Tragiques, begun in 1577, the fourth and fifth cantos are written in praise of the Protestant cause and those who fought for it.