xxxxxThe experienced explorer Sir John Franklin set out to find the Northwest Passage in 1845. His expedition, made up of two ships and a crew of 128, made it as far as Lancaster Sound, but then was never seen again. Many search missions were sent out, but it was not until 1859 that the bodies of some of the crew were found on King William Island. An account of the voyage, found on one of the men, revealed that the expedition had reached Victoria Sound, about half way between the Atlantic and the Pacific, but that the ships had then become ice-bound. 24 men died in 1847, including Franklin, and the remainder, deciding to march overland to safety, all perished in the attempt. The route across The Arctic was eventually made by the Norwegian Roald Amundsen in 1906, and the Northeast Passage was accomplished by the Swedish explorer Adolf Nordenskjold in 1879. The American Robert Peary was the first man to reach the North Pole in 1909. In Antarctica, exploration did not fully begin until the new century, led by the British pair Robert Scott and Ernest Shackelton, the German Erich von Drygalski and the Frenchman Jean Baptiste Charcot. In 1909 Shackelton came within 97 nautical miles of the South Pole. 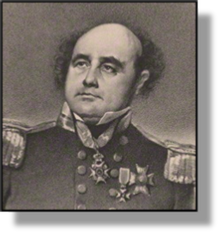 xxxxxJohn Franklin joined the Royal Navy as a lad of 14, and the following year was a member of the expedition, led by his cousin Matthew Flinders, which circumnavigated Australia. He returned in time to serve in the Battle of Trafalgar, and after an abortive attempt to reach the North Pole in 1818, he led two expeditions across Canada during the 1820s, travelling from the western shore of Hudson Bay to the Arctic Ocean, and then exploring Canada’s north-western coastline as far as Alaska. His travels were recorded in his two Narratives of a Journey to the Shores of the Polar Sea, published in 1823 and 1828. Knighted the following year for his successful exploration, he then served as governor of Van Diemen’s Land (today’s Tasmania) from 1836 to 1843. (The illustration here shows him in the uniform of a rear-admiral, the rank he attained by the end of his naval service.)

xxxxxBut Franklin’s days as an explorer were not over. Because of his wealth of experience in arctic regions, and his proven leadership qualities, in 1844 he was chosen by the British Admiralty to lead yet another expedition in search of the allusive Northwest Passage, aimed at opening a route from the Atlantic to the Pacific Ocean via an arctic waterway north of Canada. In May of 1845 he sailed from England with two ships, the Erebus and the Terror, and a crew of 128 officers and men. They reached the entrance to Lancaster Sound two months later, where they were sighted by British whalers hunting north of Baffin Island, but after that they were never seen again. 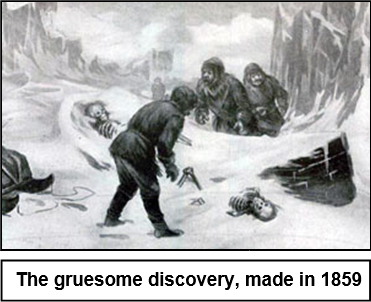 xxxxxWhat actually befell that ill-fated expedition remained unknown for fourteen years. During that time a number of expeditions, financed by Lady Jane Franklin, were sent out to find the lost crew, including those led by James Clark Ross and his uncle John Ross, but nothing was discovered until 1859. Inxthat year a final search mission, led by Captain Francis Leopold McClintock (1819-1907) managed to reach King William Island. There they found skeletons of some of the vessels’ crews, and an account of Franklin’s expedition by a Lieutenant Graham Gore, (1809-1848), written up to the 25th April, 1848. It solved the mystery of one of the most tragic polar explorations of all time. It told of the success they had achieved, but it also recorded the death of Franklin and other crew members, and gave details of the desperate plight of the remainder, and of their plan to march overland to safety. 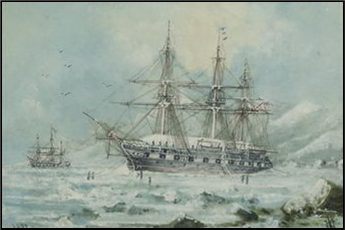 xxxxxAccording to this account, the expedition had wintered at Beechey Island over the winter of 1845-46 (see illustration here and map below). Then, returning south along the western side of Cornwallis Island, the two ships had managed to navigate Peel Sound and Franklin Strait. In September 1846, however, having succeeded in reaching about mid-point between the Atlantic and the Pacific, both ships became ice-bound in Victoria Strait and the tragedy began. At the end of eighteen months, 24 crew members had died because of sickness and lack of food, including Franklin himself, and in April 1848 the survivors left the doomed vessels and attempted to march south across the tundra regions of North America to Back River. They never made it. 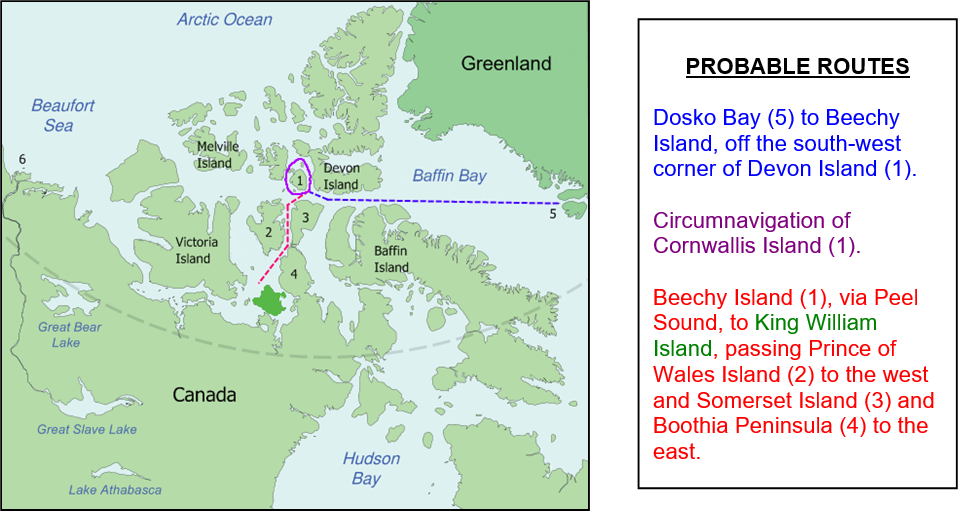 xxxxxIncidentally, an investigation into the tragedy suggested that during their fatal march south some of the crew had resorted to cannibalism, eating the flesh of men who had died en route. And post-mortems carried out on the bodies of several crew members, preserved in the icy conditions, concluded that lead poisoning contracted by eating food from faulty tins might well have contributed to the crews’ physical and mental decline. As late as 1984 the bodies of two members of the expedition were found preserved in their frozen graves on King Edward Island. 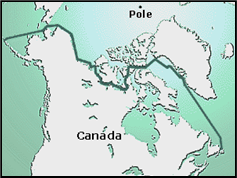 xxxxxNotxsurprisingly, the fate of Franklin’s expedition focused attention once again on the Northwest Passage, that route across The Arctic which the best of navigators, including John Cabot, Martin Frobisher, John Davis, Henry Hudson and William Baffin, had failed to achieve. The first man to make the crossing, in fact, was the Irish explorer Robert McClure (1807-1873) in 1854, while he was out searching for Franklin. But his expedition was ice-bound for two winters, and he was forced to sledge overland to reach another ship before completing the journey. Itxwasxnot, in fact, until 1906 that the Norwegian explorer Roald Amundsen, who became the first man to reach the South Pole in 1911, completed the passage by sea after a voyage lasting three years.

xxxxxThexNortheast Passage, which was attempted among others by Richard Chancellor, Willem Barents and Henry Hudson, was conquered much earlier. After making two preparatory voyages in the mid-1870s, the Swedish explorer Adolf Nordenskiöld (1832-1901) took his steam vessel Vega along the north coast of Russia from the Atlantic to the Pacific. The expedition was trapped in ice for some ten months near the Bering Strait, but it completed the journey in 1879. 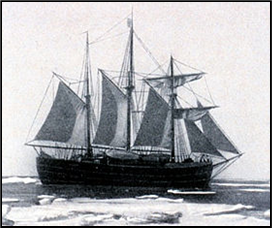 xxxxxAs we have seen, an attempt to reach the North Pole was made as early as 1806 by the English whaler William Scoresby. He reached within 510 miles of the pole. Then the English explorer William Parry penetrated even further in 1827 and, four years later the Englishman James Clark Ross discovered the north magnetic pole. Thexnext attempt was not made until 1879. Led by an American naval officer, George Washington Delong (1844-1881), it ended in total disaster. His ship, the Jeannette, became locked in the pack-ice and was eventually crushed by the moving ice flows. The explorers were forced to make their way on foot and were never heard of again. But this failure, tragic though it was, had a significant sequel. Threexyears later debris from the Jeannette was discovered on the south-west coast of Greenland, and this showed that the battered ship had drifted through the Arctic Circle from the Bering Strait to the shores of Greenland. This discovery inspired the Norwegian adventurer Fridtjof Nansen (1861-1930). He mounted an expedition in 1893 and by letting his ship, The Fram (illustrated) drift northwards in the frozen ice, he slowly moved to within striking distance of the Pole. Then travelling by sledge, he reached 86 13’ N. before being forced to turn back. After great hardship he eventually reached Franz Joseph Land off the north coast of Russia. 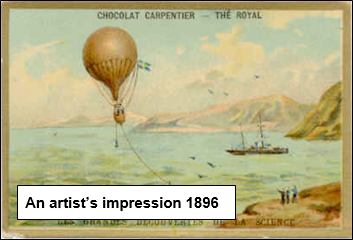 xxxxxFourxyears later a Swedish engineer named Salomon August Andrée (1854-1897) attempted to reach the pole by a hydrogen balloon. He set off with two companions in July 1897, but was never seen or heard of again. Itxwasxnot, in fact,xuntil 1909 that the American Robert Peary (1856-1920), after a number of attempts, became the first man to reach the North Pole.

xxxxxDuring the late 1830s expeditions were sent to Antarctica by France, Britain and the United States, led respectively, as we have seen, by Jules Dumon d’Urville, James Clark Ross, and Charles Wilkes. However, until the turn of the century there was no intensive exploration in the region, nor any serious attempt to reach the South Pole. The main activity was seal and whale hunting on the fringes of the continent. Then, during the first decade of the 20th century a number of explorers led national expeditions into the interior, including the Englishman Robert Falcon Scott, the Scotsman Ernest Henry Shackleton, the German Erich von Drygalski, and the Frenchman Jean Baptiste Charcot. In 1909 Shackleton came within 97 nautical miles of the pole.