xxxxxThe self-educated American statesman Benjamin Franklin, as we shall see, played an important part in the War of American Independence. Today, however, he is perhaps best remembered for his scientific experiments, particularly the one in 1752 in which he flew a kite in a thunder storm to prove the electrical nature of lightning. He also made a number of inventions, including bifocal lenses, and a highly successful heating stove. Such was the width of his interests that in 1743 he formed the Junto, a group of tradesmen from Philadelphia charged with the task of improving the city's amenities. A printer and publisher by trade, in 1773 he was responsible for starting Poor Richard's Almanac, a witty, common sense guide to successful living. As a politician he achieved the repeal of the Stamp Act in 1766, helped to draft the Declaration of Independence in 1776 (G3a), was instrumental in bringing France into the war, and took a prominent part in the peace negotiations with Britain in 1783. His last years were spent as a member of the Pennsylvania Assembly, fighting for the abolition of slavery. 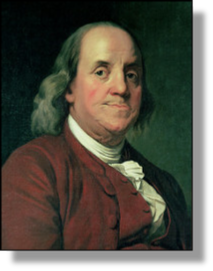 xxxxxThe distinguished American statesman Benjamin Franklin was his country's first ambassador to France, successfully managing to enlist French help in the War of American Independence. As we shall see, he also had a hand in drawing up his country's Declaration of Independence in 1776 (G3a) and played a prominent part in negotiating peace with Britain after the American colonies had won their struggle in 1783.

xxxxxWhilst his work as a politician in the formative years of the United States is known and acknowledged, he is perhaps best remembered today for his work as an amateur scientist. Mention his name, and most people conjure up a picture of him flying a kite in a thunderstorm. In this practical experiment, carried out in 1752, he attached a key to the kite's line and, by attracting electricity to it, proved the electrical nature of lightning. Based on this research, in 1754 he published his Experiments and Observations on Electricity, a work in which he introduced the terms negative and positive to identify the two charges. He then went on to invent the lightning conductor and within twenty years over 400 houses in 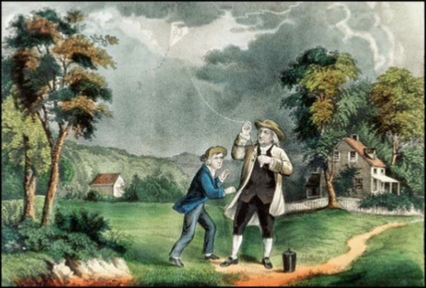 Philadelphia had been fitted with one. In recognition of his contribution to experimental science he later received honorary degrees from both the universities of Saint Andrews and Oxford, and was admitted to the Royal Academy and the French Academy of Sciences.

xxxxxHe also made a number of other useful inventions, including bifocal lenses, an efficient heating stove, an odometer for measuring the distance travelled by a cart, and a much improved glass harmonica (for which Mozart composed two pieces!). Such was the width of his interests and the strength of his civic duty, that in 1727 he formed a discussion group called the Junto (or Leather-Apron Club) made up of local tradesmen. The forerunner of the American Philosophical Society, established in 1743, this body worked for the good of Philadelphia, and, over the years, set up fire and insurance companies, and founded a free library, a hospital, and an academy committed to "useful learning". 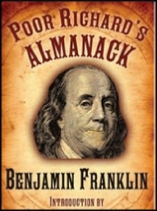 xxxxxFranklin was born in Boston, and was the fifteenth of seventeen children. He had only two years of schooling, but educated himself while a young man. He became a printer's apprentice at the age of 12, and six years later visited England, where he worked as a printer for 18 months to complete his training. On returning to Philadelphia, he set up his own business, and in 1729 bought the Pennsylvania Gazette, quickly improving its content and circulation. Among the number of successful works he published was Poor Richard's Almanac, a witty, common sense guide to successful living. First issued in 1733 under the pen-name Richard Saunders, it contained such pithy advice as "God helps those who help themselves", "Early to bed, early to rise, makes a man healthy, wealthy and wise", and “Time is Money”.

xxxxxHis interest in politics began in 1750, when he was elected a member of the Pennsylvania Assembly. In 1753 he was appointed deputy postmaster general for the colonies, and did a great deal to extend and speed up the mail service. The following year he attended the Albany Congress on the future of the colonies. The Plan of Union he then put forward, which proposed partial self-government for the colonies, came to nought. Had it been acted upon it might possibly have averted war with the mother country. He visited London during the troubles leading up to the War of American Independence, putting forward the case for a self-governing America within the British Empire, and in 1766, after testifying to the House of Commons, achieved the repeal of the Stamp Act. During his stay in England he travelled to Scotland to meet the philosopher David Hume, and he made friends with the scientist Joseph Priestly, and the economist Adam Smith. 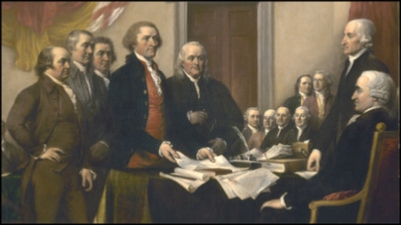 xxxxxAfter open warfare had broken out he took a leading part in the drafting of the American Declaration of Independence. The painting on the left (a detail), shows the Declaration being submitted to the Continental Congress in June 1776 (Franklin centre). Later that year he was sent to France, where, as the popular American ambassador, he proved successful in gaining not only vital French aid for the revolution, but also France's entry into the war in February 1778 - an event seen by many colonists as the turning point in the struggle. As we shall see, he was also involved in the negotiations which resulted in the settlement reached at the Peace of Paris in 1783 (G3a). Afterwards, he returned to the Pennsylvania Assembly where, as president of the executive committee, he strove hard to abolish slavery and bring an end to the slave trade. He was bedridden and in much pain during the last year of his life. He died at the age of 84, and was given an impressive funeral by Philadelphia, the city he had served so well.

xxxxxHe was not without faults (errata), as his autobiography of 1788 candidly admits, but it must be said that he was a man of outstanding character and talent. Industrious, tolerant, resolute, and with a good helping of common sense, he showed great skill as a civil administrator and diplomat and - as if that was not enough - also made a remarkable contribution as a writer, inventor and scientist. Few men have achieved distinction in so wide a field of human endeavour. As the French economist of this time, Anne-Robert-Jacques Turgot succinctly put it: "He snatched the lightning from the skies and the sceptre from tyrants".

xxxxxIncidentally, as might be expected of a printer and publisher, Franklin wrote his own epitaph. It expressed the hope that he would appear again in a "new and more beautiful edition, corrected and amended by the Author"! ......

xxxxx...... During his time as ambassador in France he assisted, among others, the American naval captain John Paul Jones, then using France as a base for his attacks on British coastal shipping. When the French gave Jones a merchantman to carry on his exploits, he named it Bonhomme Richard (Simple Richard) after Franklin's Poor Richard's Almanac. ……

xxxxx…… Andxwhen serving as Postmaster General to the American colonies, this remarkable man plotted the course of the Gulf Stream to show why mail travelling from Europe to America took longer than mail travelling the other way. The following year, 1770, working with Timothy Folger (c1732-1814), a whaler from Massachusetts, he produced a map to prove his point.