xxxxxIn 1502 James IV of Scotland had concluded a treaty of “perpetual peace” with Henry VII and, a year later, had married his daughter Margaret. The prospects of a peaceful border and, indeed, the possibility of an eventual union of the two countries seemed promising, to say the least. With the coming to power of Henry VIII, however, bent on opposing the French in aid of the pope, James was anxious to redress the balance. In 1512, therefore, he renewed the old alliance between France and Scotland. This proved to be a rash decision. In the following year when Henry invaded France, James felt obliged to honour his alliance with the French and to open a second front against the English. This also proved a rash decision. 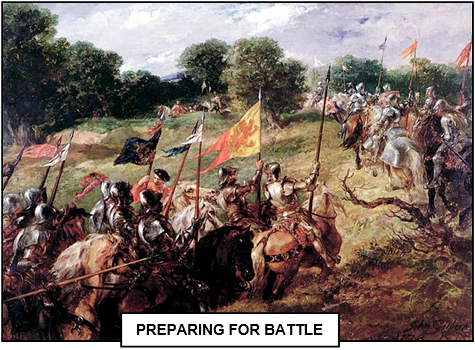 men he invaded England in August 1513 but, confronted with an official challenge by the Earl of Surrey, Henry’s lieutenant in the North, he agreed to postpone the battle until the 9th September. Again, this proved another rash decision. By that time his army had dwindled to some 30,000. At the appointed hour the two armies met on Flodden Field, a windswept area close to the border town of Coldstream in Northumberland. The outcome was nothing short of a disaster for the Scots. They fought bravely, but they proved no match for the English archers and a large force of foot soldiers armed with the deadly 8ft pike. By nightfall, their casualties amounted to 10,000 dead and wounded, and this included the death of the king himself and many of the Scottish nobility. The English lost some 4,000 men.

xxxxxIncidentally, an account of the battle is given by the Scottish writer Sir Walter Scott in his poem Marmion, A Tale of Flodden Field, published in 1808. ……

xxxxx....... The town of Coldstream is associated with the famous Coldstream Guards, raised there in 1650. It was this Guards regiment which marched to London and played an important part in the restoration of Charles II in 1660, thus ensuring its survival by a grateful monarch. ……

xxxxx…… It was in August of 1513, a month before the Battle of Flodden, that Henry - angered at French support for the Scots - led an invasion of France. His army won the Battle of the Spurs near Guinegate (so called because the French cavalry beat a hasty retreat!), and then went on to capture Tournai. However, the town was returned to the French six years later as part of a general agreement.

xxxxxA peace treaty between Scotland and England in 1502, followed by the marriage of James IV of Scotland and Margaret, daughter of Henry VII, gave promise of a peaceful border, but in 1512, when Henry VIII planned a war against the French, James renewed the old alliance with France. It was a rash decision, as was the one to invade England the following year. By the time battle was joined on Flodden Field (near Coldstream in Northumberland), his army had dwindled to 30,000 and proved no match for the English archers and their large force of foot soldiers, armed with the deadly 8ft pike. By nightfall on the 9th September 1513 the Scots had lost 10,000 men, including their king and many of their nobility.