xxxxxAs we have seen, the intervention of Gustavus Adolphus of Sweden in 1630 in support of the Protestant cause eventually proved unsuccessful. The Swedes agreed to a peace settlement in 1635. It was in this year, however, that Roman Catholic France, whose leader Richelieu was more concerned with politics than religion, entered the war to cut the Roman Catholic Habsburgs down to size. Over the next ten years, France, with her allies Sweden and the United Provinces, slowly wore down the imperial forces and, following the defeat of an Austro-Bavarian army near Nordlingen in 1645, their days were numbered. As we shall see, in October 1648 terms were agreed by the Peace of Westphalia. 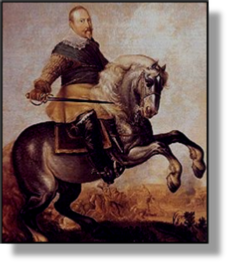 xxxxxAs we have seen, the intervention of Gustavus Adolphus of Sweden in 1630 (illustrated), like the earlier one led by Christian IV of Denmark and Norway, was unsuccessful both in protecting the Protestant faith in northern Germany and in restricting the political power of the Habsburgs. The Swedish king had met with early success, but with his death at the Battle of Lutzen in 1632 the Swedes had lost their charismatic leader. His successor, Duke Bernhard, took some ground, but in September 1634 he was comprehensively defeated by imperial forces at the Battle of Nordlingen, and the Peace of Prague was signed the following year.

xxxxxIt was in this year, however, (1635), that the war - breaking out yet again - changed its character. Up till this juncture religious issues had played a significant if not the prominent part in the conflict, but now the final phase of the war became, in essence, a struggle to reduce the power of the House of Habsburg. For some years the French had viewed with alarm the growing strength of their traditional rivals, the Habsburgs. Following the death of Gustav Adolphus and the defeat of the Swedes at the Battle of Nordlingen, they considered the time had come for action. In May 1635 Roman Catholic France, under the leadership of its chief minister Richelieu, allied with Sweden, the United Provinces and a number of German Protestant princes, and openly declared war on Roman Catholic Spain. It was clear that from now on religious differences were to play no part in the conflict. 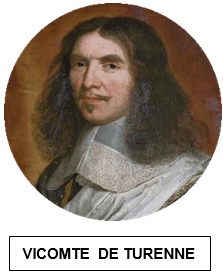 xxxxxOver the next ten years, this powerful albeit strange alliance was to prove too much for the war weary imperial forces. From the very beginning, the Habsburg position in Germany was seriously undermined by two Swedish victories, one at Wittstock in October 1636 and the other at Rheinfelden in March 1638. Slowly but surely the imperial troops were obliged to fall back from their strongholds in northern Europe, while Swedish forces swept over Austria and western German 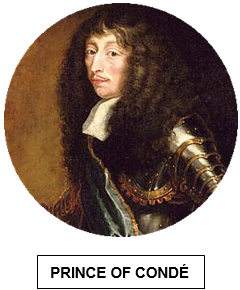 y, and occupied a Denmark which had chosen to side with the Empire. Meanwhile in the west, Spanish invasions of France were repulsed and in 1640 Portugal rebelled against their Catholic masters and gained independence under their own monarchy. In the Netherlands too, the Dutch were coming close to victory in their 80-year-long struggle for independence. Andxthe French forces, despite suffering a severe defeat at the Battle of Tuttlingen in 1643, won a string of victories under their commanders the Vicomte de Turenne (1611-1675) and the Duc d’Enghein (later the Prince of Condé), including the Battle of Rocroi in the Ardennes which marked the beginning of the end for Spanish military power in Europe.

xxxxxThexdecisive battle took place in August 1645 with the defeat of an Austro-Bavarian force at the Battle of Alerheim (sometimes known as the Second Battle of Nordlingen). This prompted the beginning of peace negotiations, and these were intensified when allied forces invaded central Bavaria. InxJanuary 1648 peace was concluded between Spain and the United Provinces, but it was not until both Prague and Munich were under siege, and the French had won a 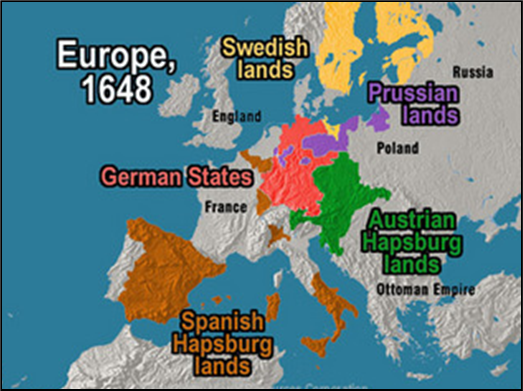 convincing victory at the Battle of Lens in August 1648, that Emperor Ferdinand, fearing an attack upon Vienna, agreed to a settlement. As we shall see, by the Peace of Westphalia in the October (1648), peace was concluded between France, Sweden, the German princes and the Holy Roman emperor.

xxxxxThe bloody and destructive Thirty Years' War, beginning in 1618, was at an end, but not all the fighting ceased. As we shall see, the war between France and Spain rumbled on until 1659 (CW), and it was not until the following year that the Swedish conflict with Poland and Denmark was eventually concluded by peace settlements.

xxxxxIncidentally, just five years after the end of the Thirty Years’ War the able French general the Duc d’Enghein - now entitled the Prince of Condé - turned his fighting skills against his own country. As we shall see, thwarted in his political ambitions, he led a revolt against royal supremacy in the so-called Princely Fronde of 1653 (CW).